These wetlands in central west New South Wales were listed under the Ramsar Convention in three stages, in 1986, 2000 and 2012. 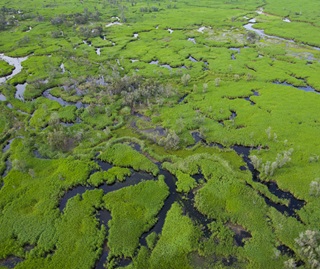 The Macquarie Marshes Ramsar site covers 19,850 hectares, and lies about 100 kilometres north of Warren in central west NSW. It consists of three subsites:

The Macquarie Marshes were listed as a Ramsar site because they meet the following criteria:

The Macquarie Marshes are one of the largest remaining inland, semi-permanent wetlands in the Murray–Darling Basin and have a high diversity of wetland types.

This Ramsar site is an example of a wetland that relies on runoff from a high-rainfall upper catchment. The Macquarie Marshes site has extensive and changeable wetlands in its semi-arid lowland reaches.

The Macquarie Marshes contain a variety of habitat types, and consequently the plant and animal species of the site are particularly diverse.

The Ramsar site is a key habitat for several plant and animal species, including Gould's long-eared bat. 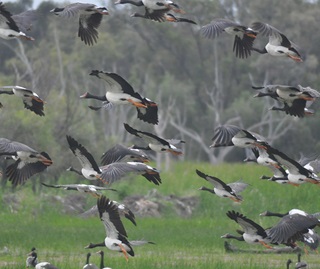 The Ramsar site represents highly significant habitat for waterbirds that breed in colonies. It is one of the few remaining sites in Australia supporting large breeding colonies of the straw-necked ibis, and one of only a few sites in NSW where magpie geese breed.

It also supports some of the largest breeding colonies of the intermediate egret, rufous night heron and royal spoonbill in the Murray–Darling Basin.

The site has a rich diversity of other waterbirds including cormorants, herons, spoonbills and ducks, many of which breed within the marshes.

The Macquarie Marshes regularly support more than 20,000 waterbirds, and more than 500,000 birds when there are large floods.

The native fish community of the Macquarie Marshes is a blend of those found in nearby main channel habitats. During flows, fish are likely to move into the marshes from these areas.

In 2009 a notification of likely change in the site’s ecological character was submitted to the Ramsar Secretariat, under Article 3.2 of the Ramsar Convention.

This came after a prolonged drought. The ‘likely change’ can best be described as a change from a semi-permanent to an ephemeral wetland system. The primary cause was found to be changes to the flow regime resulting from river regulation and extraction.

OEH, together with other agencies and managers, developed the Macquarie Marshes Ramsar Site Article 3.2 Response Strategy to deal with the decline in the wetlands and to help restore the system to good health.

The Department of Energy and Environment has commissioned a project to review the response of the Macquarie Marshes Ramsar site and determine whether the site is showing signs of recovery in its ecological character.