A year in the Macquarie–Castlereagh catchment: 2020–21

The Macquarie–Castlereagh valley covers more more than 91,000 square kilometres in the north of New South Wales. The catchment extends from the Blue Mountains to the Barwon River Plains, with major tributaries including the Cudgegong, Talbragar and Bell rivers.

The valley is home to the iconic Macquarie Marshes – one of the largest semi-permanent wetland systems and colonial waterbird breeding sites in inland Australia.

The 2020–21 water year continued the recovery of the Macquarie–Castlereagh river system from the record drought that occurred from 2017 to 2020.

Water for the environment was used to boost natural flows to improve environmental recovery from August 2020 to March 2021. Key outcomes included: 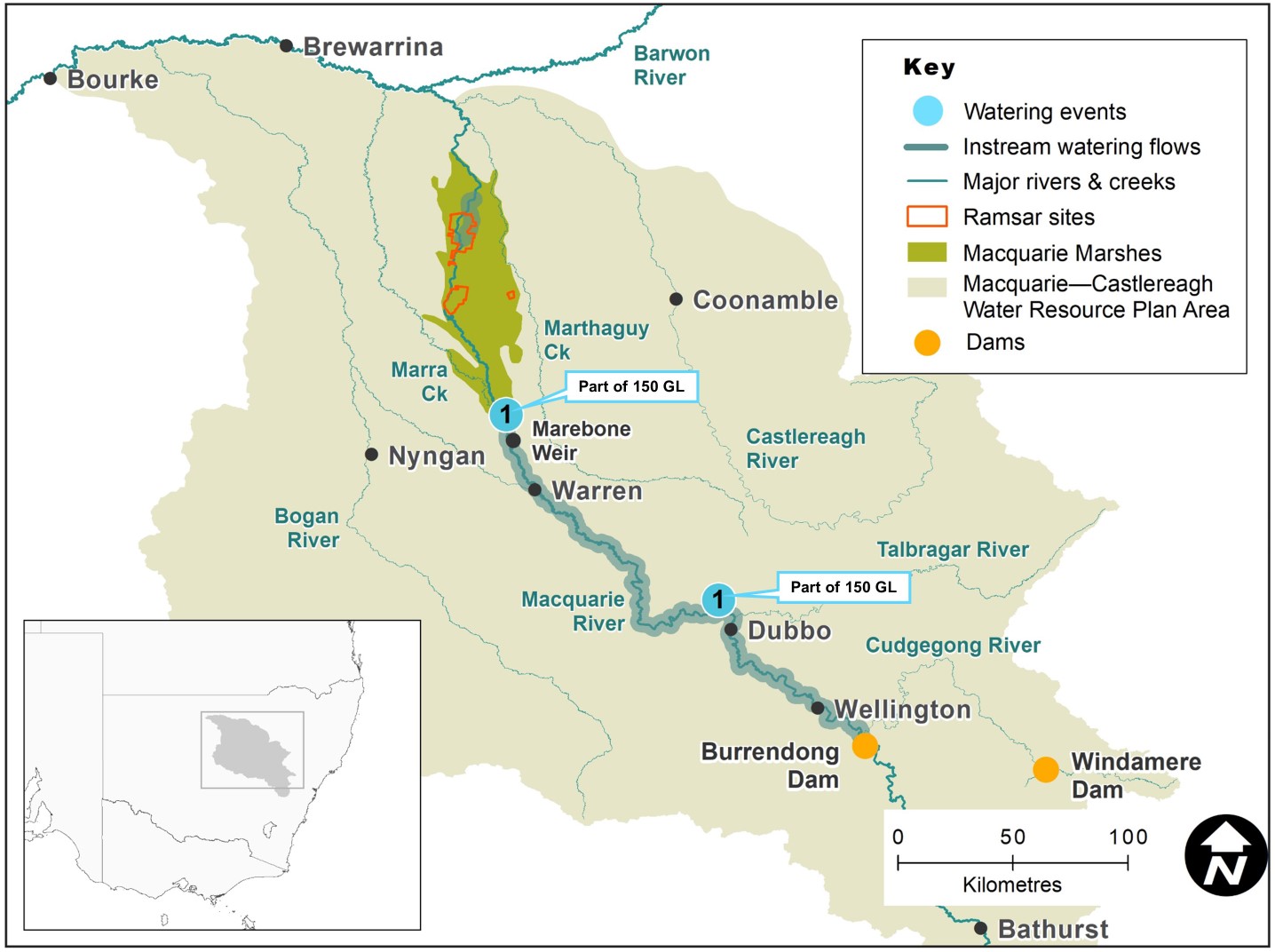 As discussed in the Macquarie–Castlereagh catchment: Annual environmental watering priorities 2020–21, the watering aims for the year were to ensure that core refuge pools and basic system components were maintained, with more water becoming available to improve drought recovery.

This bar chart and table provide a summary of 150,730 megalitres of water for the environment use in the Macquarie–Castlereagh catchment during the 2020–21 watering year. Volumes are indicative only. The watering event number on the bar chart and in the table relates to the location number marked on the map.

As water balances grew throughout the water year, the Department of Planning, Industry and Environment adapted its approach to maximise the environmental recovery though targeted actions.

Contributions from environmental flows resulted in the inner 9000 hectares of the Marches experiencing inundation for 6 months between August 2020 and February 2021. This enabled vegetation recovery and seed set across many core areas.

A stable flow of about 1000 megalitres per day in October in the mid-Macquarie river near Dubbo was built into the release strategy to support native fish breeding. These in-channel stable flow conditions were provided for specialist fish species that need specific habitat to nest. Other species expected to benefit from these conditions included native carp, gudgeon and unspecked hardyhead. Commonwealth Environmental Water Holder-funded surveys in March 2021, undertaken by Department of Primary Industries – Fisheries, indicated that Murray cod larvae generated during October 2020 had been recruited into the juvenile fish population.

Connectivity to the Barwon River

Environmental water contributed to the 41 gigalitres of flow measured downstream of the Macquarie Marshes at Miltara, on the Lower Macquarie. Some of this volume reached the Barwon River, enabling movement of fish between catchments and contributing to flows in the Barwon–Darling system.

The record drought of 2017–20 saw the regulated Macquarie River flows cut at Warren for the first time in more than 50 years. When flows returned to the Macquarie catchment in January–February 2020, the first flush from the bare catchment created a major fish kill event around Dubbo and downstream of Warren, further impacting an already struggling native fish population. This generated concerns about the survival of native fish populations, and native fish and freshwater turtle rescue efforts were conducted over the summer of 2019–20.

In year one of the plan, in the spring of 2020, a key aim of environmental flows was to support successful Murray cod nesting.

A flow target between 1000 and 2000 megalitres per day near Narromine was set for October 2020, followed by a flow pulse in November. This allowed:

Natural tributary flows continued into September 2020 but reduced in October. Dam releases were needed to maintain the target flow rate. Without those releases, the river flows would have dropped and compromised cod nesting sites.