Outcomes from water for the environment in 2020–21.

The Gwydir valley extends from the Northern Tablelands to the Northern Plains, where it joins the Barwon River, covering an area of 26,596 square kilometres. The Gwydir River system and its wetlands are located on a semi-arid floodplain, in a relatively low rainfall zone.

Inflows to the system in the 2020–21 water year provided ideal nesting conditions for waterbirds by supporting native vegetation growth and driving an abundance of food in the form of booming native fish, frog and insect populations.

Breeding was detected in 18 waterbird species, which included a small colony of great egrets, cormorants and magpie geese on the Gingham watercourse. Cormorants and darters were also detected nesting along the Lower Gwydir River during surveys in February 2021.

Survey teams detected 9 frog species in spring and summer. This included all 6 frog species known to breed in response to wetlands flows.

Releases of water for the environment were also made into the Mehi River and Carole Creek and provided an important contribution to flows further downstream in the Barwon River system. 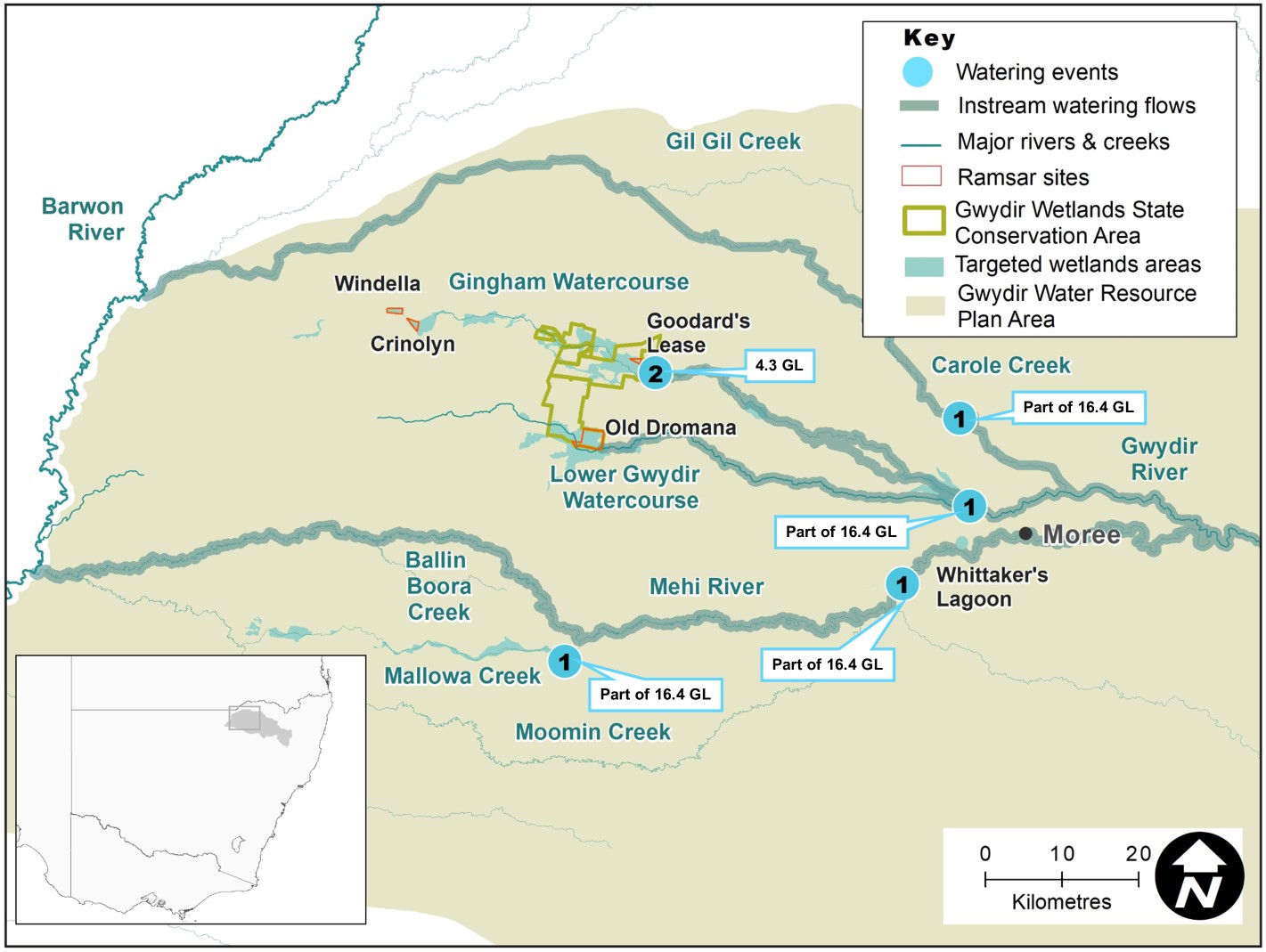 This approach looks for natural cues and ecological water needs across the range of systems and climatic conditions. Our annual planning has a rolling 3-year cycle and includes carrying over enough volume to support water-dependent communities in the longer term.

The Gwydir catchment experienced an increase in water availability in the latter part of 2020, after a very dry period since the 2016–17 water year.

As water became available, water managers were able to return more natural flows to rivers and wetlands and support colonial waterbird breeding. In addition, deliveries were provided that contributed to downstream flows in the Barwon–Darling River system.

Conditions continued to improve in early 2021, culminating in a moderate flood event across the Gwydir River floodplain during March and April. This flooding has reset the floodplain ecosystems, which will support strong productivity in 2021–22 .

This bar chart and table provide a summary of 20,752 megalitres of environmental water delivered in the Gwydir catchment during the 2020–21 watering year. Volumes are indicative only. Watering event numbers in the bar chart and table relate to location numbers marked on the map.

The Department of Planning, Industry and Environment worked with the Commonwealth Environmental Water Holder to manage 20.7 gigalitres of water flows in the Gwydir catchment during the 2020–21 water year.

Wetter conditions in later 2020 through to early 2021 allowed water deliveries to the Gwydir Wetlands, Gwydir and Mehi rivers, and the Carole and Mallowa creeks and watercourses. Flows in the downstream Barwon–Darling River system were supported by flows delivered from the Gwydir catchment.

Water managers worked with local WaterNSW staff and the upstream irrigation sector to provide water deliveries in the Gingham Watercourse that supported a small colonial waterbird breeding event in mid-February 2021. 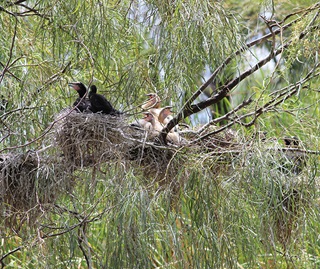 The Gwydir Wetlands are renowned as a major centre for waterbird breeding in Australia. Many waterbird species from across the Murray–Darling Basin feed and raise their next generation of young in this Ramsar site.

In late 2020 good rains and river flows returned to the Gwydir after a long dry period since 2017. In late January, 7000 megalitres of water for the environment was delivered to the wetlands from NSW and Commonwealth Environmental Water Holder accounts. This delivery was timed to supplement inflows from upstream rainfall during late 2020 and early 2021.

These flows provided ideal nesting conditions for waterbirds by supporting native vegetation growth and an abundance of native fish, frog and insect populations.

In late January, field surveys on the Gingham Watercourse detected breeding of 18 waterbird species, including egrets, darters and cormorants. More than 1000 mature magpie geese were observed in the area, and an early clutch of goslings.

During February to mid-March, water managers used a further 6400 megalitres to top-up wetland flows and support waterbird breeding in the Gingham Watercourse. The manager of an upstream irrigation farm agreed to take their ordered water at a later date, which allowed water for the environment to reach the breeding colonies in the shortest possible time.

This adaptive approach was key to ensure resource-rich wetlands for these beautiful waterbirds to raise their young across another season.