Use of water for the environment in NSW: Outcomes 2020–21

This report summarises the use of water for the environment across New South Wales in the 2020–21 water year and highlights the ecological outcomes achieved.

Water for the environment is managed to deliver benefits for communities and important environmental assets across New South Wales. When communities and industries face significant challenges during dry times, our rivers and wetlands also do it tough. As more water returns to our river systems, we need to adapt our planning to ensure sites have the opportunity to recover and increase their resilience for future dry times.

New South Wales is home to a unique array of native plants and animals that rely on our rivers and wetlands to survive the boom and bust cycles that shape the Australian landscape.

Water for the environment is a share of the water available in our dams and rivers that is managed to support the ongoing health of local waterways. 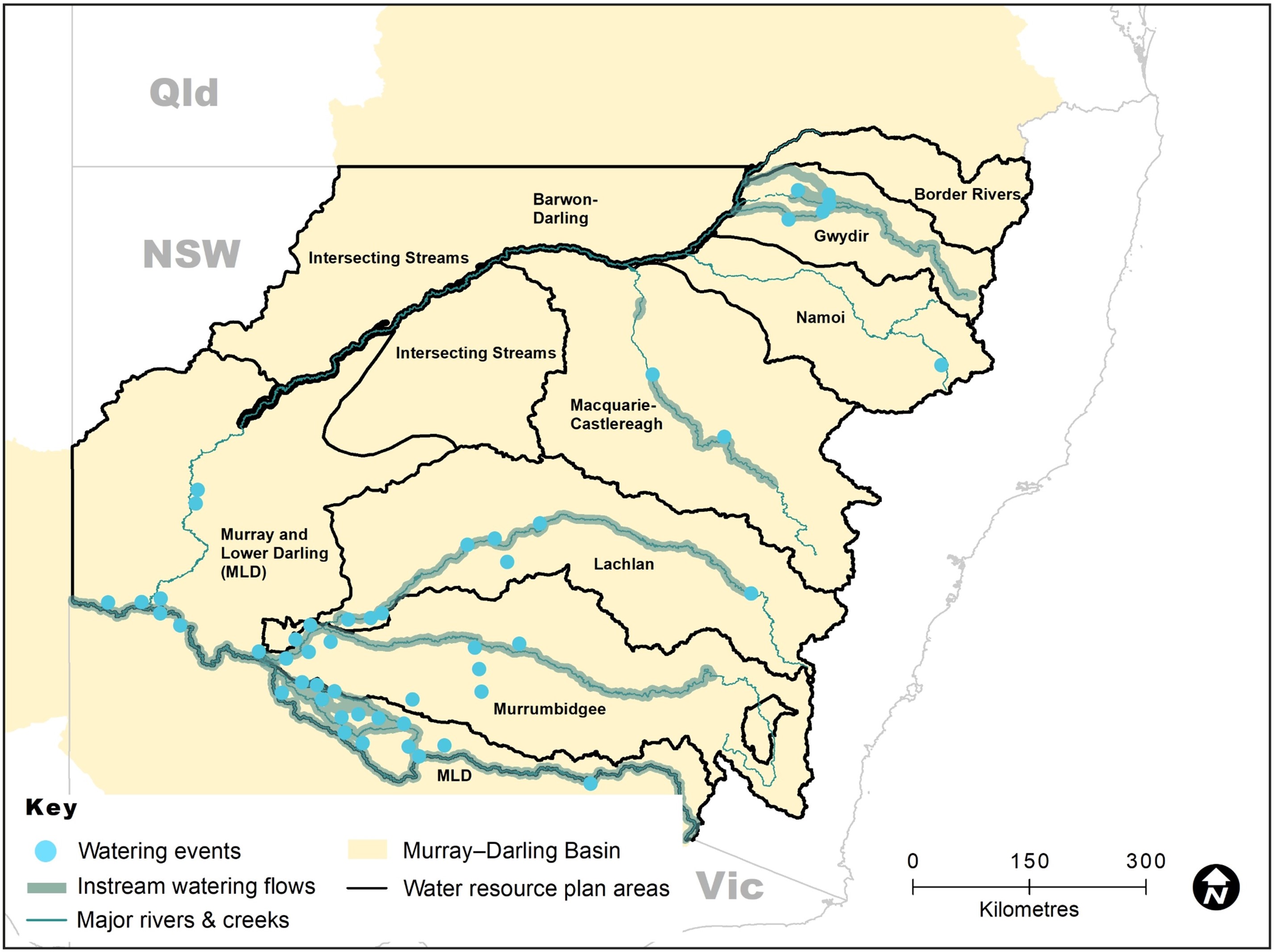 This outcomes report details the work we do in 9 water resource plan areas to support our river systems and meet the needs of native plants, native fish, waterbirds and other water-dependent wildlife:

Visit our Water for the environment webpages for further information on what we do, how we make decisions and how we deliver environmental flows.

Maintaining and restoring the health of rivers and wetlands for future generations is the aim of our Water for the Environment Program. Our adaptive management approach allows us to focus our efforts on outcomes that can be achieved with the water that’s available in any given year.

Planning for much of the state was based on a dry to moderate resource availability scenario. However, widespread rainfall and improved dam levels provided an opportunity for the program to pivot and target enhanced outcomes at sites across the state.

To begin the water year, teams focused on ongoing drought recovery efforts, providing water to refuge sites to support key populations of native fish, waterbirds, plants and other water-dependent wildlife. Where more water was available, teams worked to support restoration of habitat and expand areas of inundation to provide feeding, breeding and movement opportunities for native fish, waterbirds and frogs.

In natural flowing rivers we worked with other water agencies to protect some instream flows to provide benefits for communities and the environment.

We continued our work with community advisory groups to prioritise the sites to receive water and build on the successes of previous years. Where possible, we also managed our water reserves to hold some water in account for future dry times. We also collaborated with numerous landholders across the rivers and floodplains in which we work. Their support and cooperation are critical to the successful outcomes achieved.

In 2020–21 we delivered 237 gigalitres of water to rivers, creeks and wetlands on private and public land. We:

In 2020–21 we delivered 493 gigalitres of water to rivers, creeks and wetlands on private and public land. We:

In 2020–21 we delivered 82 gigalitres of water to rivers, creeks and wetlands on private and public land. We:

In 2020–21 we delivered 150 gigalitres of water to rivers, creeks and wetlands on private and public land. We:

In 2020–21 we delivered 20 gigalitres of water to rivers, creeks and wetlands on private and public land. We:

A year in the catchments

By monitoring these indicators, we can measure progress towards meeting Basin Plan and long-term water plan objectives. We are also able to continually improve how we deliver water for the environment to meet those objectives.

We monitor environmental flow events and long-term changes in vegetation condition and extent, as well as changes in waterbird and frog populations in response to water management. Our monitoring efforts focus on wetlands targeted by water for the environment, including the Gwydir Wetlands, Macquarie Marshes, Lower Lachlan Wetlands, Lowbidgee Floodplain and Millewa Forest. We have also extended our monitoring efforts to the Snowy River, in partnership with the Department of Planning, Industry and Environment – Water.

We use a variety of technologies to determine whether the environmental water requirements of our river and wetland ecological communities are being met. This includes:

We work with the Commonwealth Environmental Water Holder (CEWH) to deliver water for the environment and ensure improvements to the health of rivers and wetlands in the most effective way. This efficiency extends to monitoring. We collaborate with the CEWH, independent researchers, tertiary institutions, and community groups to improve our understanding and prevent duplication of effort.

We report our findings to the Murray–Darling Basin Authority to meet Schedule 12 requirements of the Basin Plan. Schedule 12 includes annual reporting of ecological outcomes at an asset-scale (Matter 9.3) and a 5-yearly evaluation (Matter 8). The 5-year evaluation is due in 2025. We also provide regular updates to the community through our website and stakeholder engagement.

An independent evaluation of our Water for the Environment MER Program between 2014 and 2019 has also been completed and these findings will be made publicly available later in 2021.

Following a dry start to the 2020–21 water year, widespread rainfall across the NSW Murray–Darling Basin resulted in wetter conditions as the year progressed. Increased storage levels enabled water for the environment to be delivered to river and wetland habitats across the state. Targeted habitats included non-woody wetland vegetation, river red gum forests and woodlands, black box and coolabah woodlands and lignum shrublands.

The aim of these deliveries was to support long-term water plan objectives. For example, improved connectivity and inundation across rivers and wetlands included watering:

At the start of the water year, waterbird surveyors in the Gwydir Wetlands, Macquarie Marshes, Mid and Lower Lachlan, Murrumbidgee and Murray wetlands encountered numerous dry sites, with waterbird habitats confined to watercourses and isolated waterholes.

Over the spring and summer, following widespread rainfall and the delivery of water for the environment to wetlands across the NSW Basin, wetlands filled and waterbird habitats increased.

In the Mid and Lower Lachlan, we observed 55 species of waterbirds including blue-billed ducks and magpie geese, as well as migratory shorebird species (sharp-tailed sandpiper, Latham’s snipe and red-necked stint) recognised under international migratory bird agreements. The nationally endangered Australasian bittern was heard calling, which was significant as there have been few records of Australasian bitterns in the Great Cumbung in recent decades – the last confirmed record was in 1991. Inundated wetlands also provided habitat for breeding, with 6 active waterbird colony sites identified.

Twenty active waterbird colonies were found in the Murrumbidgee. This included a large ibis colony in the Gayini Wetlands, and smaller ibis, egret, spoonbill, heron and cormorant breeding sites across the rest of the Murrumbidgee catchment. The nationally endangered Australasian bittern, NSW-listed vulnerable blue-billed duck and freckled duck were also found at several Lowbidgee floodplain sites.

Surveys in the Barmah–Millewa Forest under The Living Murray Program identified 48 waterbird species which was a significant increase from the 36 species recorded in 2019–20. Australasian bitterns were recorded calling at Moira Lake and successful breeding of spoonbills, cormorants and ibis was observed.

Over the 2020–21 summer, natural inflows and the delivery of water for the environment supported frog breeding across many monitored sites.

Monitoring in the Murrumbidgee, as part of a long-term Commonwealth program, found frogs actively calling at most sites that received water for the environment. Southern bell frogs were heard calling at multiple wetlands in Yanga National Park and the Gayini Wetlands, with large choruses also heard at Sunshower Lagoon in the mid-Murrumbidgee.

Our business model allows for the periodic trading of water to cover some of the charges involved in holding and managing water licences. Our trades are modest and usually less than 2% of the water available to the environment within a water year.

More information about some of our partner agencies is available on our terms and definitions webpage.