Covering an area of 81,527 square kilometres, the Murrumbidgee valley includes 26 storage or diversion structures, along with a 1690-kilometre stretch of the river, and surrounding wetlands.

The Murrumbidgee catchment saw increasingly wet conditions and above average inflows during summer and autumn 2020–21. This resulted in 100% general security allocations being reached by 15 January 2021 (the average carryover was 18%) with about 30 gigalitres of NSW environmental water allowances available for use.

The focus of water managers in 2020–21, with an increasing resource availability scenario as identified in the Murrumbidgee catchment: Annual environmental watering priorities 2020–21, was aimed at restoring a more normal flow pattern to support a robust food web and other system functions. Dry conditions continued until early 2021 when wetter than expected conditions occurred.

Water was carried over from the 2019–20 water year to build on low starting allocations. Under these conditions, environmental water managers worked with the Commonwealth Environmental Water Holder to water the Gayini (Nimmie-Caira) wetlands, located in the Lowbidgee region. This private property event inundated over 15,000 hectares of lignum wetlands and creeks, triggering significant colonial waterbird breeding events.

Remaining water for the environment was used to maximise native fish passage as well as habitat important to waterbird species such as Australasian bitterns and brolgas. Significant outcomes included: 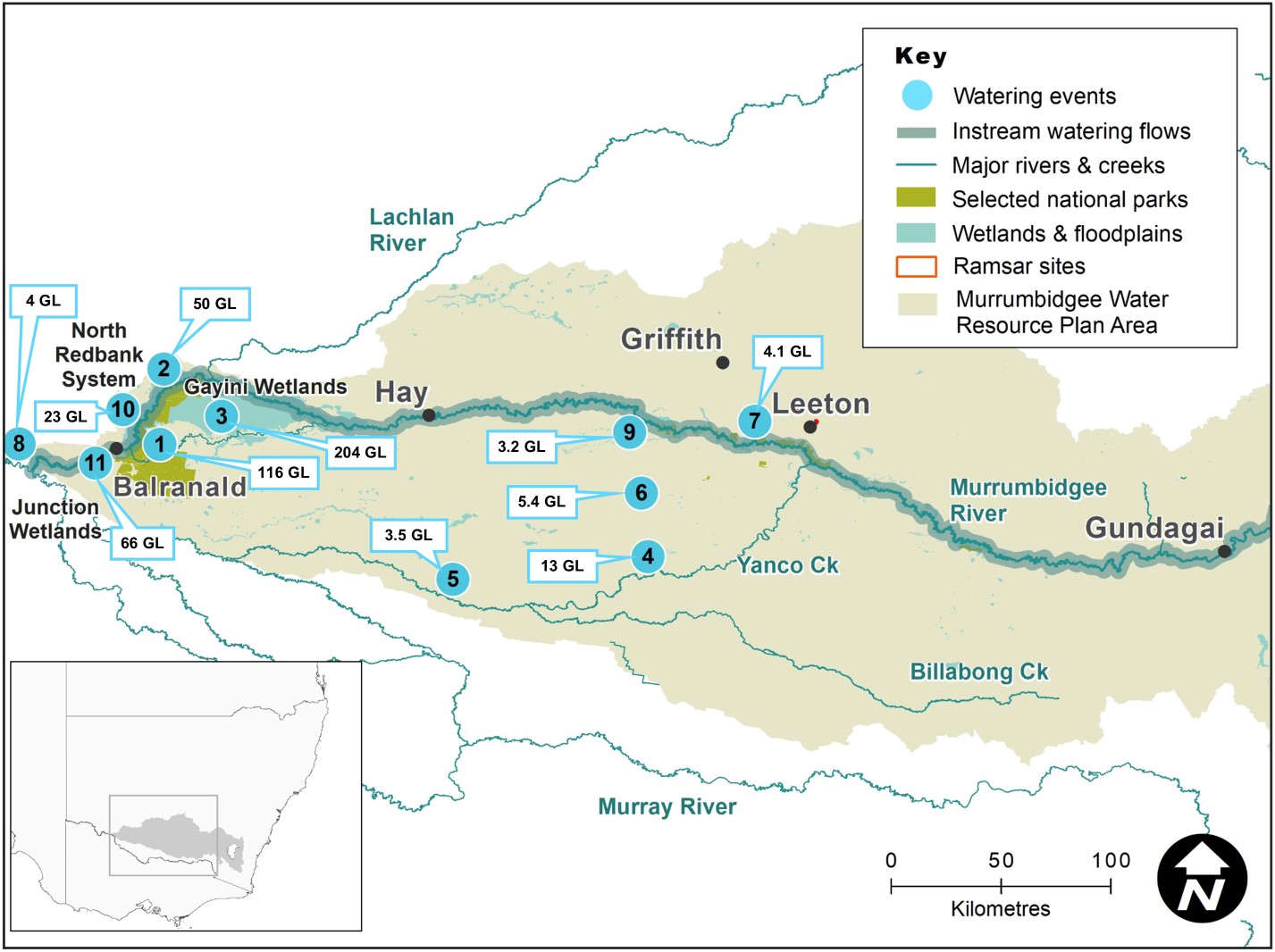 After only minimal watering of Yanga National Park in 2019–20, plans were put in place to use water for the environment to inundate Yanga wetlands and waterways including inflows via the recently reconfigured Gayini system.

Water for the environment was also set aside specifically to manage a Murrumbidgee Wetland reconnection flow in April–May 2021, but this event was postponed due to essential dam maintenance works.

The Murrumbidgee Environmental Water Advisory Group considered the condition of river and wetland assets, water availability and weather forecasts and recommended flows to support a range of ecological outcomes. The main aims of the flows were to:

The watering aims identified in the Murrumbidgee catchment: Annual environmental watering priorities 2020–21 were largely implemented as proposed under the increasingly wet conditions.

This bar chart and table provide a summary of 493,768 megalitres of water for the environment delivered in the Murrumbidgee catchment during the 2020–21 watering year. Volumes are indicative only. Watering event numbers in the bar chart and table relate to location numbers marked on the map. 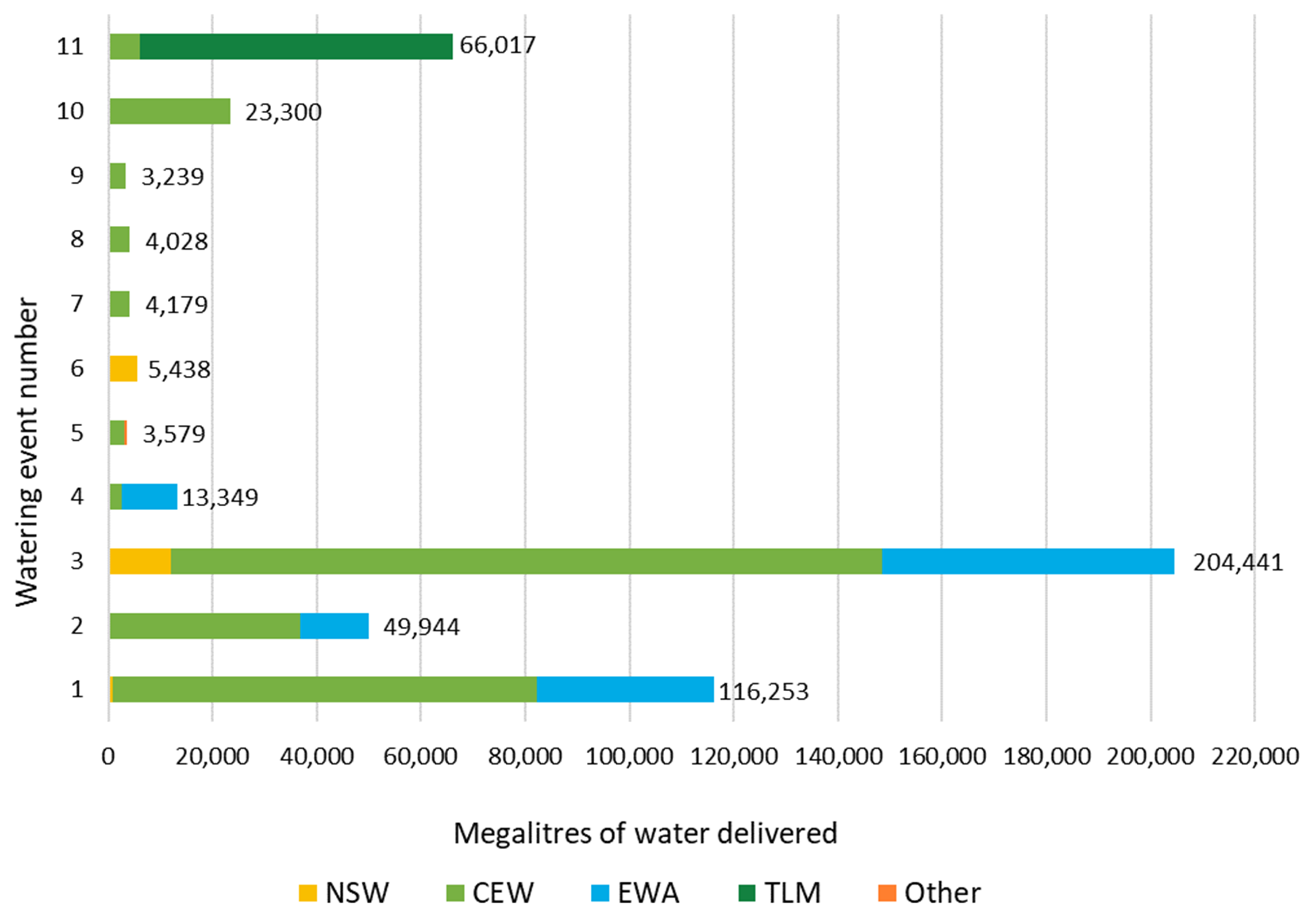 In partnership with the Murrumbidgee Environmental Water Advisory Group, the Commonwealth Environmental Water Holder and landholders, environmental water managers from the Department of Planning, Industry and Environment delivered much of the available water for the environment to the Lowbidgee Floodplain, primarily to wetland systems in Gayini (Nimmie-Caira), North Redbank and Yanga National Park.

Water for the environment was pumped into Sunshower Lagoon near Darlington Point by a local contractor. Pumping eliminated carp, maximising the aquatic vegetation and frog response, with southern bell frogs calling at the site for the second time in a decade.

Creek flows to Wanganella swamp on the forest creek system were supplemented with water for the environment using a neighbouring landholder’s pump. This action continued the rehabilitation of this important waterbird breeding site, with 72 water-dependant bird species recorded, 37 of which were confirmed to be breeding.

These outcomes were achieved through implementing the key planned actions proposed for the 2020–21 water year. 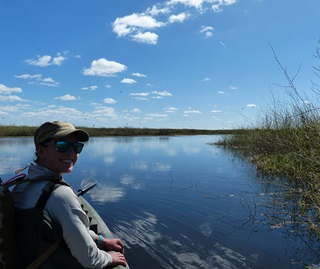 The Lowbidgee Wetlands are one of the most important colonial waterbird breeding areas in the Murray–Darling Basin. The Lowbidgee wetland systems often support nesting waterbird colonies in the tens of thousands. Nesting typically follows significant overbank flooding events. These breeding events have often been sustained with the application of water for the environment.

The 2020–21 season reset our understanding around the scale of waterbird breeding that can be initiated and sustained solely with the use of water for the environment.

Inundations of Yanga National Park, Gayini wetlands and the North Redbank wetland systems with water for the environment began in winter 2020.

To the east of Yanga in the Gayini wetland system, the Eulimbah Swamp rookery contained an estimated 18,600 nests, primarily straw necked ibis, glossy ibis and spoonbills.

This scale of nesting was the largest ever documented in the Murray–Darling Basin, where water for the environment alone has firstly initiated and then sustained a successful breeding event.

By the time all the waterbirds had fledged and water levels were allowed to decline, over 40,000 hectares of wetlands had been inundated using just under 400,000 megalitres of water for the environment.

The environmental water delivery in Gayini was managed by the landowners the Nari Nari Tribal council in close consultation with Department staff and with the oversight of a multi-agency technical advisory group.