The Namoi catchment is located in north-western New South Wales covering an area of about 42,000 square kilometres. It is bordered by the Gwydir and Castlereagh catchments. The major river system is the Namoi River, with tributaries including the Peel and Cockburn rivers and Goonoo Goonoo Creek, with major water storages being Keepit, Split Rock and Chaffey dams.

At the start of the 2020–21 water year, reserves in Keepit and Chaffey dams, although slightly improved, were not enough to provide water allocations to general security licence holders or environmental water accounts. With a moderate outlook of rain, but no water for the environment available, the resource availability scenario for the Namoi and Peel rivers was ‘very dry’. The primary focus for water management was to improve water security for towns and where possible, support native fish.

July to December 2020 saw the Namoi and Peel rivers slowly emerge from drought conditions. General rainfall returned, but the drought-depleted soil profile over the catchment saw modest runoff reach storages. However, natural inflows from the tributaries during this period replenished river pools and refreshed water quality along the length of the lower Namoi River.

Widespread rain between January and June 2021 initiated the start of drought recovery in the Namoi and Peel rivers and tributary inflows serviced ecological water demands.

In April 2021, general security licence holders received a 77% water allocation of their shareholding in the Peel River. This available water determination was made to provide 3850 megalitres of Chaffey Dam Environmental Contingency Allowance and 890 megalitres of Commonwealth Environmental Water Holder (CEWH)-held environmental water.

Water for the environment is available for the 2021–22 water year with Keepit and Chaffey dams at full supply level. 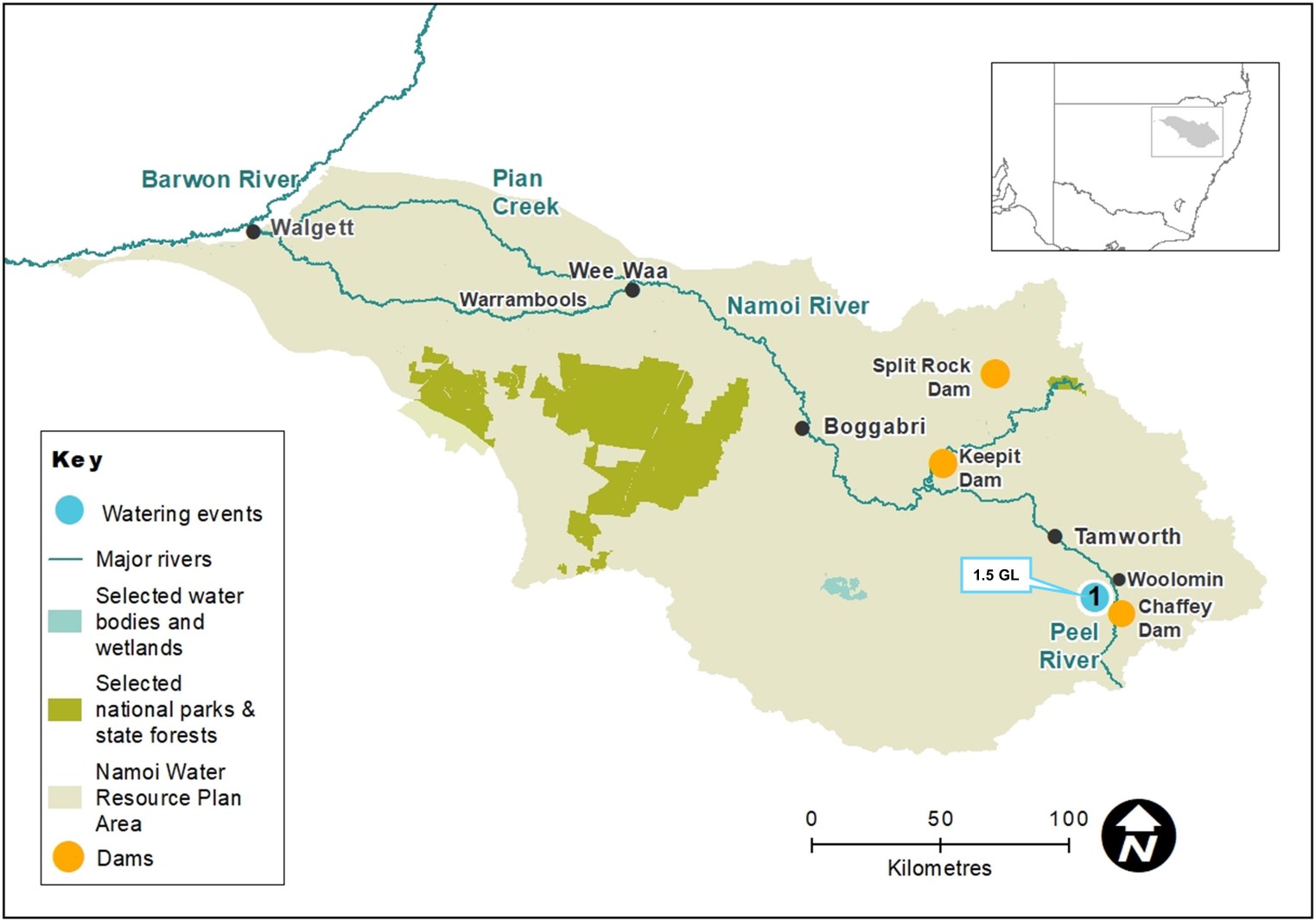 As identified in the Namoi catchment: Annual environmental watering priorities 2020–21, the focus of water managers was to support, where possible, native fish populations through:

With no available water for the environment, this outcome relied on natural flow events in tributaries below Keepit, Split Rock and Chaffey dams. To help guide the sharing of natural flow events, water managers provided advice on critical environmental water needs within the NSW drought management response framework.

When water security improved in the Namoi and Peel rivers, environmental flows were used to continue drought recovery.

In autumn, a portion of water for the environment was used to provide a base flow along the 7.5-kilometre length of the Peel River between Chaffey Dam and Woolomin village. The aim of this release was to increase access to food and habitat, and improve the health of native fish and riverine mammals, such as platypus and rakali (native water rat), and enhance opportunities for successful breeding in spring.

This bar chart and table provide a summary of 1565 megalitres of environmental water delivered in the Namoi catchment during the 2020–21 watering year. Volumes are indicative only. The watering event number on the bar chart and in the table relates to the location number marked on the map.

The Department of Planning, Industry and Environment, in collaboration with the Department of Primary Industries – Fisheries identified the 7.5-kilometre section of the Peel River immediately downstream of Chaffey Dam to have significant drought refuge value. The absence of base flows and fresh flows in the river for more than 18 months had reduced the availability of food and habitat.

This section is the only refuge in the regulated Peel River that can be supported during prolonged droughts. The limited water available for environmental use during droughts highlights the value of this section of the river for refuge and system recovery. This section of the river supports platypus, rakali (native water rat), turtles and threatened fish species such as silver perch and Murray cod. It also supports other native fish species such as gudgeons, Australian smelt and river blackfish.

The managed release allowed native fish and platypus to move throughout the river system and find more suitable habitat, including deeper pools, logs and vegetation. The flow improved riverine productivity by flushing carbon and other nutrients off low in-channel sediment bars. This much needed flow replenished food supplies and helped improve the health and condition of native fish before winter. The healthier native fish are when they emerge from winter, the more likely they are to successfully breed during spring.

An improvement in dissolved oxygen levels was also recorded in the largest refuge pool in the regulated Peel River located immediately below Chaffey Dam.

After years of drought and cease-to-flow conditions in the Peel River downstream of Chaffey Dam, the river had retreated to a series of disconnected pools.

As a drought response to secure town water supply for Tamworth, the minimum daily flow rule from Chaffey Dam had been suspended since November 2019 and authorisation given to WaterNSW to deliver water to Tamworth via a pipeline. This authorisation was subject to conditions that:

Using expert and local knowledge, the Peel Environmental Water Technical Advisory Group recommended release of the available accrued 61.5 megalitres over 4 days from 30 July 2020 to reconnect pools. The release was successful. It restored flow along the 7.5-kilometre section of river and replenished river pools that provided important drought refuge for local populations of platypus, rakali, turtles and threatened fish species such as silver perch and Murray cod.