This report summarises the use of water for the environment across New South Wales in the 2021–22 water year and highlights the ecological outcomes achieved for our regional environments and the communities that rely on them.

Water for the environment is managed to deliver benefits for communities and important environmental assets across New South Wales.

During periods of higher rainfall, we adapt our planning to ensure rivers and wetlands can maximise the opportunity to recover and increase their resilience for future dry times. Water for the environment use is high because the need for natural processes to run their course is also high.

New South Wales is home to a unique array of native plants and animals that rely on our rivers and wetlands to survive the boom and bust cycles that shape the Australian landscape.

Since river regulation, our rivers and floodplains connect less often than is needed to remain healthy.

Water for the environment is the best available tool that allows us to support the ongoing health of local waterways along with the native plants, animals and local communities that rely on them.

Water for the environment is delivering habitat restoration on a landscape scale. 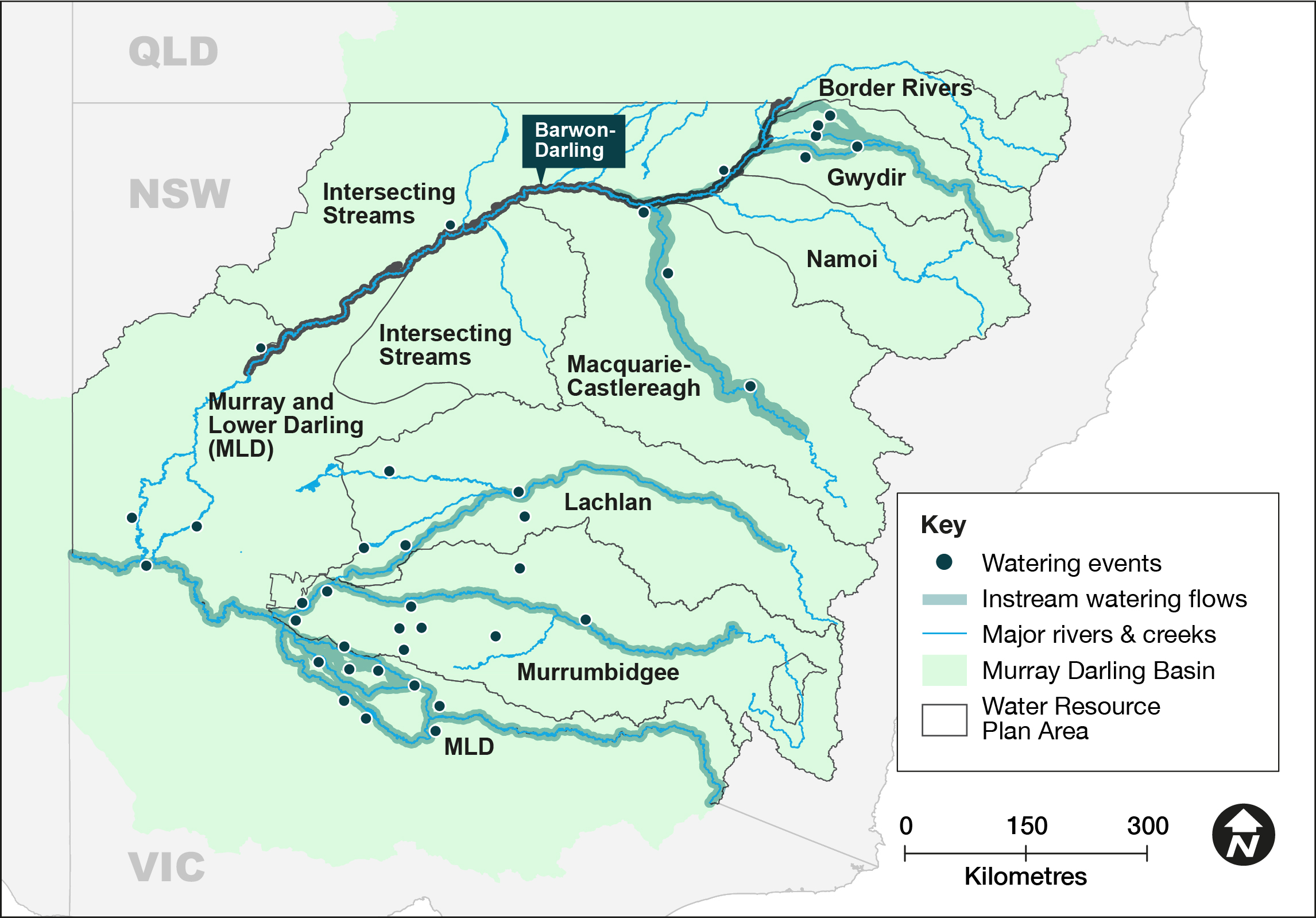 This outcomes report details the work we do in 9 water resource plan areas to support our river systems and meet the needs of native plants, native fish, waterbirds and other water-dependent wildlife:

Visit our Water for the environment webpages for further information on what we do, how we make decisions and how we deliver environmental flows.

Maintaining and restoring the health of rivers and wetlands for future generations is the aim of the Water for the Environment Program. Our adaptive management approach allows us to focus our efforts on outcomes that can be achieved with the water that’s available in any given year.

At the start of the water year, the state was experiencing variable conditions with plans in place to respond where possible. Widespread rainfall and improved dam levels provided an opportunity for the program to target enhanced outcomes at sites across the state.

Teams worked to support restoration of habitat and expand areas of inundation to provide feeding, breeding and movement opportunities for native fish, waterbirds and frogs.

In natural flowing rivers we worked with other water agencies to protect some instream flows to provide benefits for communities and the environment.

We continued our work with NSW community-based environmental water advisory groups (EWAGs) to prioritise sites to receive water and build on the successes of previous years. We collaborated with numerous landholders, First Nations and community members across the rivers and floodplains where we work. The support and cooperation of stakeholders is critical to the successful outcomes achieved.

In 2021–22 we delivered 448 gigalitres of water to rivers, creeks and wetlands on private and public land. We:

In 2021–22 we delivered 684 gigalitres of water to rivers, creeks and wetlands on private and public land. We:

In 2021–22 we delivered 34 gigalitres of water to rivers, creeks and wetlands on private and public land. We:

In 2021–22 we delivered 72 gigalitres of water to rivers, creeks and wetlands on private and public land. We:

In 2021–22 we delivered 50 gigalitres of water to rivers, creeks and wetlands on private and public land. We:

In 2021–22 we protected 46 gigalitres of water for the environment in the Barwon–Darling. During this water year we:

In 2021–22 no deliveries of water for the environment were made. During this water year we:

In 2021–22 no deliveries of water for the environment were made. During this water year we:

By monitoring these indicators and evaluating the outcomes against planned targets, we can measure progress towards meeting long-term water plan objectives and the goals of the Basin Plan. We are also able to continually improve how we deliver water for the environment to meet those objectives by increasing our understanding of how river and wetland systems respond to flow and flooding regimes.

We track changes in the inundation regimes of floodplain wetlands, vegetation condition (plant community composition), and changes in waterbird and frog populations in response to water regimes. Our monitoring efforts focus on wetlands targeted by water for the environment, including the Gwydir Wetlands, Macquarie Marshes, Lower Lachlan Wetlands, Lowbidgee Floodplain and Millewa Forest. We have also extended our monitoring efforts to the Snowy River, in partnership with the Department of Planning and Environment – Water.

A variety of methods are used to monitor environmental indicators including:

We work with the Commonwealth Environmental Water Holder (CEWH) to collaborate with their MER providers including independent researchers, tertiary institutions, and community groups to improve our understanding through complementary monitoring programs.

Our findings are reported to the Murray–Darling Basin Authority to meet Schedule 12 requirements of the Basin Plan. Schedule 12 includes annual reporting of ecological outcomes at an asset-scale (Matter 9.3) and a 5-yearly evaluation (Matter 8) due in 2024.

We also provide regular updates to the community through our website and stakeholder engagement.

An independent evaluation of our Water for the Environment MER Program between 2014 and 2019 has also been completed.

2021–22 was a wet year with widespread rainfall across the NSW Murray–Darling Basin. Increased storage levels enabled water for the environment to be delivered to river and wetland habitats across the state to strategically support river flow connections and inundation of wetlands, native vegetation health, waterbird and frog breeding and native fish health.

In 2021–22 natural river flows inundated extensive areas of floodplain, including critical flood-dependent habitats of non-woody wetlands, shrublands such as lignum, as well as the forest and woodland communities of river red gum, coolibah and black box. This included:

Triggered by widespread wet conditions during spring–summer 2021–22, the most extensive colonial waterbird breeding event in more than a decade unfolded across the NSW Murray–Darling Basin.

At least 14 waterbird species established more than 80 individual breeding colonies, with more than 250,000 nests across 6 major wetland complexes in the Macquarie, Narran, Gwydir, Lachlan, Lowbidgee and mid-Murray. The 2021–22 water year was a critical season for breeding, with monitoring by the long-term Eastern Australian Waterbird Survey indicating ongoing decline of populations across many waterbird species.

The Gwydir had its largest breeding event since 2011–12 with 45,000 nests from 14 species supported through to fledging. In Narran Lakes, 10,000 nests were recorded from 12 colonial nesting waterbird species including straw-necked ibis, royal spoonbill, little pied cormorants and Australasian darter.

The Macquarie Marshes saw large-scale waterbird colonies of over 90,000 nests, including 3 ibis colonies of up to 40,000 nests each, as well as several large-scale (5,000+ nests) night heron and egret colonies in river red gum forests.

In the Lachlan more than 30,000 adult pelicans nested at Lake Brewster and successfully reproduced to fledglings, making this the largest breeding event in more than 30 years.

Across the Lowbidgee floodplain more than 20,000 straw-necked ibis and royal spoonbills nested in the Gayini (Nimmie-Caira) wetland system and about 15,000 pelicans nested in Kieeta Lake. Targeted surveys of the endangered Australasian bittern and Australian little bittern were completed in the Lowbidgee during the 2021–22 breeding season, with booming activity concentrated to only a couple of sites.

In the mid-Murray there were about 1,500 colonial waterbird nests.

Intensive monitoring of waterbird breeding colony sites is vital for seasonal adaptive management of environmental water deliveries. Data from this infrequent event contributes to the long-term data record, which is necessary to evaluate our progress towards meeting long-term targets. The aim of these targets is to arrest the decline of waterbirds across the Murray–Darling Basin.

During the 2021–22 spring-summer, natural inflows and the delivery of water for the environment provided wetland habitat for frogs and supported frog breeding across many monitored sites.

The Lower Lachlan was once a refuge for the endangered southern bell frog. The species was detected in 2021 for the first time since 2012. The Saving our Species Team surveyed 21 wetland sites in the lower Lachlan area during the spring of 2021–22 to gain baseline knowledge of southern bell frog distribution in the region. Surveys included the Great Cumbung Swamp region and primarily used acoustic recorders. Southern bell frog numbers appeared to be relatively low at most sites, with the exception of Dry Lake and Lignum Lake. Higher numbers were recorded at sites nearer to the Murrumbidgee region. It’s thought the frogs may have migrated north during wet conditions when parts of the Murrumbidgee River were in flood. Ongoing monitoring will be key to determining the species’ persistence and defining targeted watering strategies.

In the Murrumbidgee Saving our Species staff, in partnership with the CEWH, Coleambally Irrigation and private landholders, conducted surveys for the southern bell frog. Hundreds of southern bell frogs were detected at some sites. 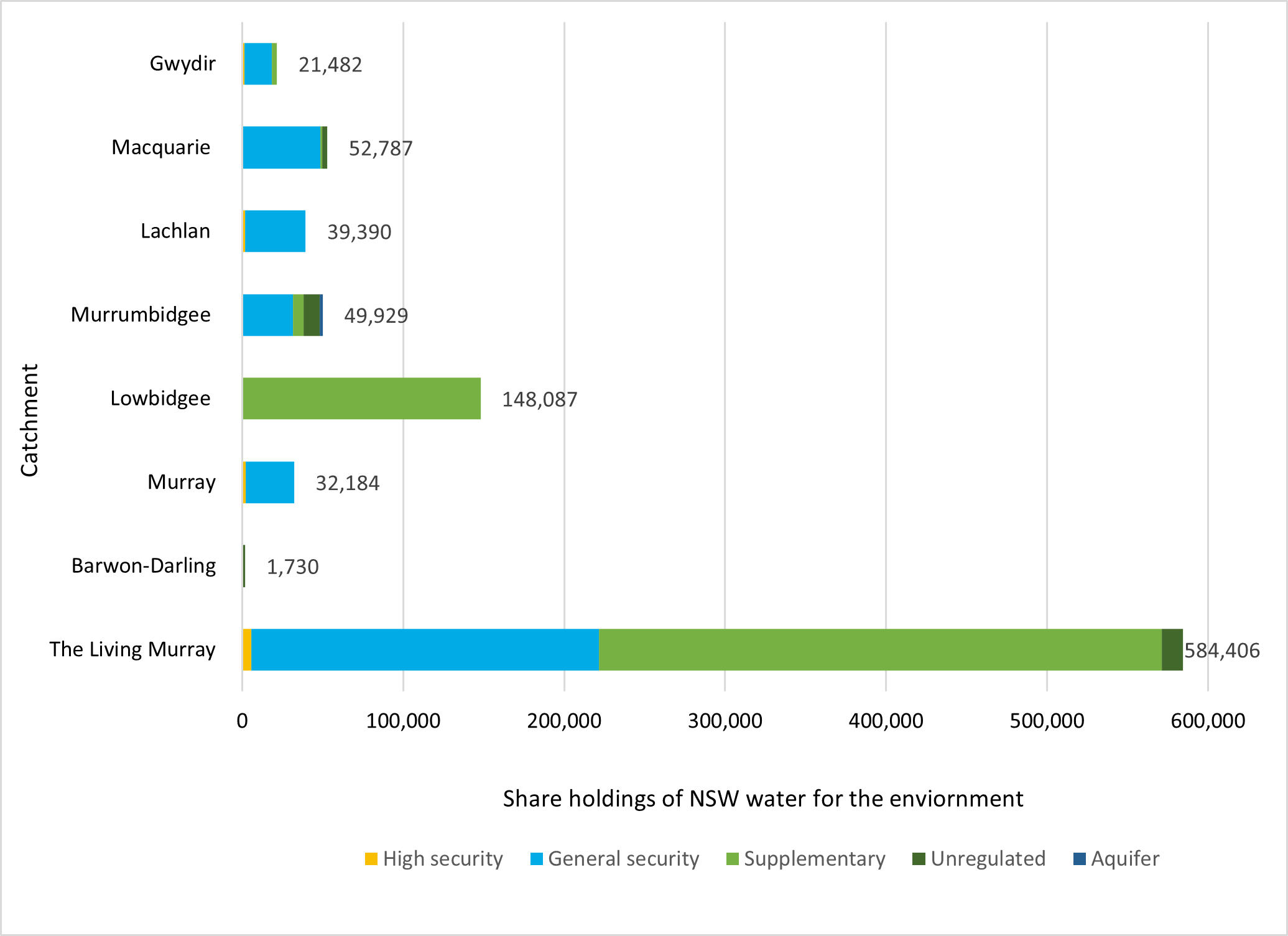 The Department uses the water market to:

Trades typically commit less than 5% of the water available to the environment and are a small proportion of the total trades made by other market participants.

More information about water trade announcements and reporting is available.

More information about some of our partner agencies is available on our terms and definitions webpage.