These wetlands in far western New South Wales were listed under the Ramsar Convention in 2007. 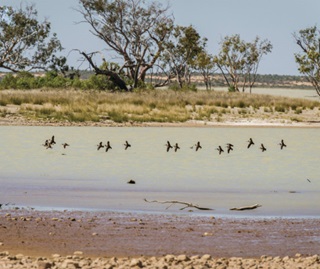 The Paroo River is in far western New South Wales. It is considered the last free-flowing river in the Murray–Darling Basin.

The Ramsar site consists of 2 parts:

The Paroo River Wetlands were listed as a Ramsar site in 2007 because they meet the following criteria:

It maintains a natural pattern of water flow because there are no major diversions, dams or weirs.

It also has two distinct sets of artesian mound springs, which are characterised by either deposits of sediment and salt or depressions. They are some of the rarest landforms in Australia.

Several threatened plants have been identified in the Paroo River Wetlands, including the salt pipewort, considered the rarest vascular plant in NSW.

The vegetation adapted to the artesian mound springs is also listed as a threatened ecological community.

The Paroo River Wetlands are recognised as a significant refuge for biological diversity because they contain unique genetic, species and ecosystem diversity.

There are newly identified plant and crustacean species, and a separate breeding population of golden perch.

There is also a high diversity of bird populations. The wetlands of the Paroo and Warrego rivers are some of the most important areas for waterbirds in the Murray–Darling Basin.

The wetlands within Nocoleche Nature Reserve support one of the largest stands of yapunyah, a medium-sized floodplain tree restricted to the Paroo region in NSW. It has a high tolerance for drought and extremes of temperature.

The maintenance of species diversity relies on the assortment of habitats provided along the Paroo, including pools, floodplains, swamps and marshes, and semi-permanent lakes.

These wetlands are of outstanding importance for waterbirds, regularly supporting more than 20,000. The highest numbers were in 1993, when 35,900 waterbirds were recorded at Peery Lake and 28,000 at Poloko Lake, part of which falls within the Ramsar site.

The Paroo River Wetlands support one of the healthiest native fish communities in the Murray–Darling Basin.

Recent research has found the site’s golden perch population is genetically distinct and effectively a separate breeding population from golden perch elsewhere in the basin.

The site’s significance for Aboriginal people

The Paakantji and Budjiti people are the traditional owners of the Paroo. They were involved in the Ramsar site listing and continue to be consulted on how the reserves are managed, for the following reasons:

The key to maintaining the ecological character of the Paroo River Wetlands Ramsar site and wetlands in the catchment is to protect the Paroo River from alteration of river flows that have affected other regulated rivers around the world and in the Murray–Darling Basin.