These swamps in the Riverina region of New South Wales were listed under the Ramsar Convention in 2002. 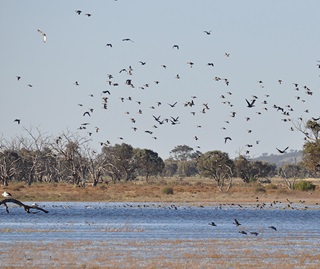 Fivebough and Tuckerbil Swamps are on Crown land near Leeton in the Riverina region of New South Wales.

The two swamps were listed as a Ramsar site in 2002 because they meet the following criteria:

Fivebough and Tuckerbil Swamps support more than 1% of the estimated south-eastern Australian population of the Australasian bittern.

The swamps are important for maintaining a high diversity of waterbird species within the Riverina. The number of migratory bird species listed under international agreements and the abundance of some waterbird species are among the highest recorded in the Murray–Darling Basin.

A total of 83 species of waterbirds have been identified at Fivebough Swamp and 69 species at Tuckerbil Swamp. 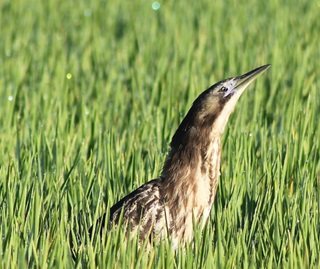 Fivebough Swamp is a significant drought refuge, because part of it retains water all year round. It is also an important site for migratory waterbirds and provides important feeding habitat for four species of egret.

Both swamps provide breeding habitat for waterbirds, with 22 species observed breeding at Fivebough Swamp and 11 species at Tuckerbil Swamp.

Tuckerbil Swamp is also an important flocking area for the brolga, which is endangered in New South Wales.

The swamps have regularly recorded populations of over 20,000 waterbirds, with counts of glossy ibis and whiskered tern at Fivebough Swamp being the highest recorded for Australia.

Criterion 6: Supports 1% or more of the population of waterbird species

Glossy ibis, sharp-tailed sandpiper, whiskered tern, Australasian bittern and brolga have all been recorded at these swamps in numbers estimated to be greater than 1% of their populations.

Delivering the Ramsar Convention in NSW

In NSW a diverse range of stakeholders are working cooperatively to promote the conservation and wise use of wetlands and to implement the Ramsar Convention. Effective conservation of wetlands requires complementary management of both land and water by government and land managers.