These wetlands in north-west New South Wales were listed under the Ramsar Convention in 1996. 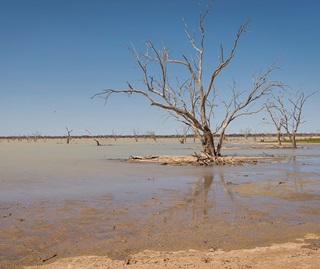 Lake Pinaroo is in Sturt National Park near Tibooburra in the north-west corner of New South Wales. It is within the Lake Eyre drainage division.

When full, the lake is attractive to visitors as it provides a contrast to the arid landscapes in the rest of the national park. It also provides opportunities to see many species of waterbirds and large flocks of unique desert birds such as budgerigars.

Lake Pinaroo was listed as a Ramsar site in 1996 because it meets the following criteria:

Lake Pinaroo is the largest terminal basin within the NSW part of the Simpson–Strzelecki Dunefields bioregion. A terminal basin retains water, because it has no outflows to other bodies of water such as rivers or the ocean.

Lake Pinaroo is an ephemeral wetland that’s subject to erratic flooding and extended dry periods. Once full, however, it can take up to six years to dry out. 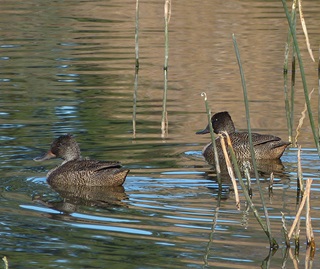 This Ramsar site supports threatened species including the following:

Criterion 3:Populations of plants and/or animals important for maintaining biodiversity of a particular bioregion

Lake Pinaroo is important for supporting plants and animals in the arid zone of NSW. It holds water much longer than any other wetland within the region, providing breeding habitat for up to 61 species of waterbird.

It also provides an important non-breeding refuge for birds that may have bred on other wetlands, particularly interdune swamps that hold water only for relatively short periods (up to six months).

Lake Pinaroo provides a refuge for plants and animals in the surrounding areas during drought because it retains water for long periods.

It is also an important stop-over site for migratory wading birds listed under international agreements. These birds include the black-tailed godwit, common greenshank, marsh sandpiper and red-necked stint.

Management of this Ramsar site is guided by the following documents: