The term ‘wild dog’ refers to all free-living dogs in NSW, including dingoes, feral dogs and their hybrids. NPWS controls wild dogs to minimise harm to livestock on neighbouring properties. 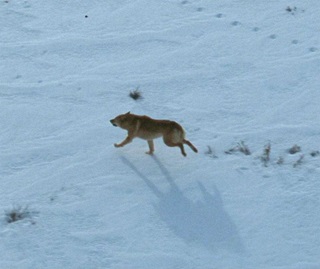 Wild dogs can kill and harm livestock, especially sheep. As a result, they have been identified as a priority pest animal under the 11 Regional Strategic Pest Animal Management Plans developed by Local Land Services.

As an identified pest animal, it is necessary to manage wild dogs under the General Biosecurity Duty of the Biosecurity Act 2015. The General Biosecurity Duty requires any person dealing with biosecurity matter (such as wild dogs), and who knows or ought to know of the biosecurity risks posed by that biosecurity matter, to take measures to prevent, minimise or eliminate the risk as far as is reasonably practicable. This means that the occupier of lands (both private and public) is required to take all practical measures to minimise the risk of any negative impacts of wild dogs on their land or neighbouring lands.

This requirement is directly informed by the NSW Wild Dog Strategy, which promotes a balance between managing wild dogs in areas where they have negative impacts and preserving the ecological role of dingoes. The conservation of dingoes is listed under the Goals of the strategy and is to be achieved by having Wild Dog Management Plans focus control on areas where the risk of negative impacts are greatest and not undertaking control in other parts of the landscape with a low risk of negative impacts from wild dogs, to allow dingoes to fulfil their natural ecological role.

This policy explains how NPWS meets its obligations to control wild dogs under the NSW Wild Dog Strategy. NPWS aims to minimise the risk of wild dogs causing damage while allowing for the conservation of dingoes within areas of national parks and reserves with a low risk of negative impact.

1. NPWS will undertake wild dog control to meet its obligations under the Biosecurity Act 2015 and the NSW Wild Dog Strategy.

3–5. How will NPWS meet its responsibilities to control wild dogs? expand

3. NPWS will develop wild-dog management plans for all parks where a high risk of negative impacts from wild dogs is identified. These plans will be developed in accordance with the NSW Guidelines for the Preparation and Implementation of Wild Dog Management Plans (PDF 339KB).

4. NPWS will implement wild-dog control in parks as agreed to in wild-dog management plans. NPWS may also contribute to agreed collaborative actions such as reactive trapping.

5. NPWS will work with park neighbours, wild-dog control associations and Local Land Services to plan, implement and report on the collaborative control of wild dogs. This may include planning for strategic aerial baiting programmes and reactive trapping.

6. How will NPWS undertake wild-dog control in parks? expand

NPWS will use a range of best-practice methods to:

Methods will be consistent with the Code of Practice and Standard Operating Procedures for the humane control of wild dogs.

7. How will NPWS minimise impacts on non-target species? expand

8. How will NPWS allow for the conservation of dingoes during wild-dog control? expand

NPWS will aim to achieve effective wild-dog control while allowing for the conservation of dingoes by targeting wild-dog control in areas where the risk of negative impacts on livestock is high, and not undertaking control in other parts of the landscape with a low risk of negative impact from wild dogs, to allow dingoes to fulfil their natural ecological role. This does not preclude wild-dog or fox control for other reasons as outlined in this Policy. NPWS may also monitor the status of dingo populations and level of hybridisation.

9–10. How will NPWS measure and report on wild-dog control? expand

9. NPWS will capture data on control efforts in a statewide database, the Pest and Weed Information System.

10. NPWS will report on the implementation of wild-dog management plans and other wild-dog control in the way set out in the NSW Guidelines for the Preparation and Implementation of Wild Dog Management Plans (PDF 339KB).

NPWS will report on:

This policy applies to all lands acquired or reserved under the National Parks and Wildlife Act 1974 (NPW Act), except for lands reserved under Part 4A of the Act (unless the Board of Management for those lands has adopted the policy). However, the policy still provides guidance for staff in their dealings with Boards of Management.

This policy aims to provide information and guidance on how NPWS:

Park is a reserve gazetted under the NPW Act, including a national park, nature reserve, historic site, Aboriginal area, State conservation area, karst conservation reserve, regional park or any land acquired by the Minister under Part 11 of the Act.