Many military training activities are inconsistent with the purposes of national parks. Using national parks for these activities should be considered only when all other options have been exhausted. 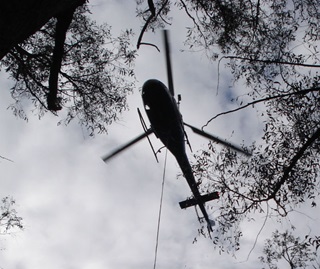 1. For the purposes of this policy, ADF training activities that may be carried out in parks are divided into two categories:

2. Outdoor training is potentially acceptable in parks. Applications to carry it out will be considered on a case-by-case basis.

4. Applications for ADF training activities in parks will be assessed and determined by the relevant park authority.

6. Any ADF training activities in wilderness areas must be carried out in accordance with the management principles of the Wilderness Act 1987.

7. Any ADF training activities involving declared wild rivers or their catchments must be in accordance with the wilderness policy.

9. Training activities, particularly special forces training, may significantly affect the environment. Authorising officers should assess whether the training activities in question constitute an ‘activity’ under the Environmental Planning and Assessment Act 1979, and proceed as directed.

12. As far as possible, noise from training activities is to be minimised so that it is not ‘likely to interfere with or cause a nuisance to any person or animal’ in the park (clause 13, NPW Regulation). Where this is not possible, consent from the park authority is required under the NPW Regulation.

13. The killing or trapping of wildlife and destruction of vegetation will not be permitted as a part of ADF training activities in parks.

14. The carrying of firearms:

The carrying of ammunition is allowed for special forces training and requires consent under the NPW Regulation. The discharge of firearms is not permitted for any military training activities on park. OEH’s Firearms Management Manual (internal document available to staff) does not apply to defence personnel.

16. Some parts of parks are used or occupied by the ADF as a result of an existing interest inherited by the OEH at the time of reservation. Where this use exceeds the provisions of this policy, OEH will negotiate with the ADF to establish a timeframe in which activities will become subject to this policy.

17. OEH supports and encourages help from the ADF to carry out, on a volunteer basis, management tasks that can be of mutual benefit to both OEH and the ADF. These tasks should be undertaken as military activities and not as volunteer activities.

19. OEH may observe training activities to monitor their impact.

20. Bad weather and high fire risk can make it more likely that training activities will damage the park environment. OEH reserves the right to cancel activities at short notice.

21. The ADF will be liable for any restoration or repair of any damage that occurs to land and facilities, and for any injury to, or caused by, equipment or persons participating in a military activity in parks. Before commencing a training activity, the ADF must provide a written Indemnity and Release to OEH, indemnifying OEH against all injury, loss, damage, costs, expenses and so on, and releasing OEH from all liability.

22. When assessing an application to undertake ADF training in parks, the park authority should take into account whether:

The impacts of the proposed exercise should also be assessed, by considering whether:

The park authority should also ensure that:

23. Consent for any activity must be in writing and subject to any conditions necessary to ensure conformity with a plan of management, and to minimise environmental impacts and impacts on other park users. Conditions may be imposed relating to:

The Regional Director should issue a Consent under Regulation form to issue these written consents.

24. Consent may be granted for a fixed number of identified activities to occur in an area over a period of 12 months. The continuation of the consent will be subject to, and not guaranteed by, the ADF continuing to meet all conditions of the consent.

25. All communication with the ADF in regard to applications to undertake training in the parks will be made through the Defence Plaza in Sydney.

26. A fee will apply to all applications to undertake ADF training activities in parks. The fee will include a cost-recovery component for work undertaken by OEH in assessing applications and preparing consents, in addition to any existing park-entry and camping fees.

27. OEH may change the fee structure from time to time and notify the ADF accordingly.

28. OEH may negotiate with the ADF regarding the provision of park-management work in lieu of payment of fees (see clause 17 of this policy).

This policy applies to all training activities undertaken by the ADF on lands acquired or reserved under National Parks and Wildlife Act 1974 (‘parks’).

Note: provisions in this policy may be overridden where:

Under the National Parks and Wildlife Regulation 2009 (the NPW Regulation), consent is required for any ADF training activity to occur in parks.

The ADF may volunteer to undertake park-management works for the purposes of training (for example, constructing or demolishing structures). Generally these works are undertaken in conjunction with OEH staff.

The Snowy Mountains Region and Sydney Harbour National Park have been identified by the ADF as presenting unique and essential areas for certain types of ADF training. The significance of these areas relates to environmental conditions and also, in regard to Sydney Harbour National Park, the location in relation to potential military or terrorist targets. This policy provides scope for a more sophisticated level of training activities to be undertaken in parks in these areas. All proposals should be considered on a case-by-case basis. All types of training activity are subject to all the provisions of this policy.

Relevant legislation or other mandating instruments

Legislation and/or mandating instruments that this policy supports are:

The statutory basis for the ADF is the Commonwealth Defence Act 1903 (Defence Act).

Section 69 of the Defence Act, which allowed the ADF access to any lands with the authority of the Governor-General, has been repealed. Section 69 requires the ADF to obtain consent for training activities on park. These repealed powers have been replaced by similar powers under clauses 49 and 51 of the Defence Force Regulations 1952, which allow the Commonwealth to declare Defence Practice Areas. Where activities in these areas are considered unlawful by state legislation, but are inconsistent with provisions under Commonwealth legislation, the Commonwealth legislation will prevail (section 109 of the Australian Constitution).

The NPW Act sets out the management principles and objectives for park categories, and provides for the acknowledgement of existing interests.

Consent is required under part 2 of the NPW Regulation for a number of activities that may be included in ADF training activities.

Under part 5 of the EP&A Act, OEH must consider the environmental impact of all activities that occur in parks.

Park means a national park, historic site, state conservation area, regional park, nature reserve, karst conservation reserve or Aboriginal area, or any land acquired by the Minister under Part 11 of the Act, and includes all roads and waters within the boundaries of any such park, site, area, reserve or land.

Park authority is defined under the NPW Act.