A vast property spanning more than 33,000 hectares has been added to the NSW national parks estate, protecting a vital refuge for rare and threatened species in perpetuity. 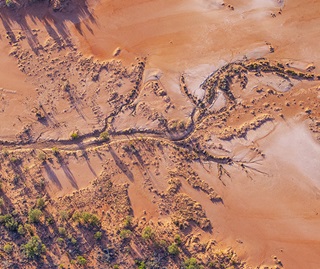 The National Parks and Wildlife Service is celebrating a new addition to its estate. Thirty-three thousand hectares of land containing internationally significant wetlands and desert habitat is now in our care, protecting a vital refuge for rare and threatened species in perpetuity.

Brindingabba National Park is on Budjiti and Barkandji country, around 175 km north-west of Bourke and 75 km south-east of Hungerford.

Brindingabba National Park is in the Cuttaburra Basin, and forms part of the Paroo and the Warrego floodplains in the Murray-Darling's northern basin. The new park will protect an important part of Lake Wombah and more than 7,000 hectares of Yantabulla Swamp, which are nationally important wetlands. After inundation, these wetlands support thousands of waterbirds, including internationally protected migratory shorebirds and threatened species, such as freckled ducks, pink-eared ducks, grey teals and night herons.

Brindingabba features a diversity of ecosystems, from gidgee country and stony mulga rises to Mitchell grass grasslands, blackbox and coolibah lined creek systems, clay pans and lignum swamps. The new national park protects habitat for at least 12 endangered and 31 vulnerable species., such as the kultarr, grey-crowned babbler, hooded robin, pink cockatoo and brolga. A comprehensive vegetation survey has been undertaken, including surveys for the endangered lancewood (Acacia petraea), which is only found in 2 other areas in New South Wales and hasn't been previously protected within the NSW national parks system.

Brindingabba National Park also contains extensive Aboriginal cultural heritage, with many artefacts and items of significance located across the park. The National Parks and Wildlife Service will work with the local Aboriginal community to protect these important cultural sites. Brindingabba is thought to mean 'thunder talks' in Kunja language.

The purchase of Brindingabba and Bindra Stations involved a groundbreaking partnership with The Nature Conservancy Australia and the NSW Government. Environment Minister James Griffin said completion of the purchase of Brindingabba was made possible by a grant from The Nature Conservancy Australia, which brokered contributions from charitable foundations, The Wyss Foundation and artist Haley Mellin's Art into Acres initiative.

"This purchase is an important milestone for the conservation of New South Wales' unique biodiversity and supports Australia's commitment to protecting 30% of the continent by 2030," Ms Rowe said.

Brindingabba Station is well known across the Bourke and Hungerford districts due to its long history as a significant pastoral station and is used colloquially as a landmark. The name was adopted for the property in c1870, and the historic Brindingabba Homestead was built in c1893. The property has been continuously grazed since this time.

The National Parks and Wildlife Service are incredibly proud to be commencing our stewardship of this incredible landscape. This remote Outback national park will be a new adventure for Outback explorers. We expect to have the park open and camping facilities built before the end of 2023.