Kamay 2020 commemorates 250 years since the encounter between Aboriginal Australians and the crew of the HMB Endeavour.

Kamay Botany Bay National Park is a magnificent headland site that bounds the mouth of Botany Bay, Sydney. The Kurnell Precinct of Kamay Botany Bay National Park is located on the southern headland of Botany Bay. The place is highly significant for Australia as it is the site of contact in 1770 between Aboriginal Australians and the crew the HMB Endeavour. It is also the place of last sighting of the French explorer Compte de La Perouse in 1788, the locality for many of the plant species first collected by Banks and Solander, and contains important samples of endangered ecological communities.

The Kamay 2020 Project is a joint Australian and New South Wales Governments project to commemorate the 250th anniversary since the encounter between Aboriginal Australians and the crew of the HMB Endeavour at Kurnell. This significant project has been informed by the Kamay Botany Bay National Park Kurnell: Master Plan and Plan of Management to deliver improved visitor amenity and access, provide new experiences and acknowledge the diversity of stories associated with this place.

The 250th anniversary of contact between Aboriginal Australians and the crew of the HMB Endeavour provides a unique opportunity to take a fresh look at this nationally significant place as one that respects and interprets many layers of history. To commemorate the anniversary in 2020, 3 bronze sculptures were installed along the Kurnell foreshore to shares stories from the perspective of the local Aboriginal community.

Implementation of Stage 1 of the Master Plan commenced in 2019 as part of the joint Australian and New South Wales Governments funding program. This includes several components managed by National Parks and Wildlife Service (NPWS):

In addition to this, upgrades are underway for Cape Solander as part of the NSW Government's largest infrastructure investment in national parks' history.

Information on these works can be found on our Whale watching platform at Cape Solander page.

Who is involved in the Kamay 2020 Project? expand

Funding has been provided by the Australian and New South Wales Governments. National Parks and Wildlife Service (NPWS) is also working with partner organisations to deliver this project including Transport for NSW.

Why is Kurnell special? expand

The Kurnell headland has been a special place to Aboriginal Australians for thousands of years. It is a place of meeting, of ceremony and of plenty. As the landing place of the HMB Endeavour, Kurnell represents a significant place in Australia's history and represents the early contact between Aboriginal Australians and European explorers. The National Parks and Wildlife Service was given responsibility of Kurnell in 1967 and the Botany Bay National Park including La Perouse was gazetted in 1988. In 2016, 'Kamay' was added to the name of the national park to acknowledge the traditional owners of this land, the Gweagal.

What has informed this project? expand

The Kamay 2020 Project was informed by the Master Plan and Plan of Management which were developed to protect, enhance and share the special values of the national park:

During the development of these Plans, community engagement was undertaken with Aboriginal communities, the local Kurnell community, park users, visitors and school and education users among others involved in this process. The full summary of the engagement activities during this process can be found in the Summary of community and stakeholder engagement: Kamay Botany Bay National Park, Kurnell.

Were there events or ceremonies in 2020 to mark the 250th anniversary of the meeting of cultures? expand

Due to COVID-19 related public health orders, planned activities to respectfully commemorate the 250th anniversary of the meeting of cultures at Kamay Botany Bay National Park unfortunately were unable to go ahead. This included Sutherland Council's Meeting of Two Cultures event on the 29 April and the Gweagal Ceremony on the 28 April.

How will the heritage values of the site be protected? expand

Kamay Botany Bay National Park is listed on the NSW State Heritage Register. A conservation management plan for the Meeting Place Precinct at Kurnell was prepared in 2008 and endorsed by the NSW Heritage Council. Any major site works will be subject to rigorous environmental planning procedures in accordance with the Environmental Planning and Assessment Act 1979 and formal approval of the NSW Heritage Council under the Heritage Act 1977. The site is also recorded on the National Heritage List under the Environmental Protection and Biodiversity Conservation Act 1999.

Is anything planned for La Perouse? expand

As part of the Kamay 2020 Project, NPWS has partnered with Transport NSW to deliver ferry infrastructure to connect La Perouse and Kurnell across the bay. A ferry service ran along this route up until 1974 when the wharves were destroyed in storms. Funding for Kamay 2020 will contribute to this project and more information will be circulated as the project progresses.

Randwick City Council is responsible for the La Perouse Museum and has been undertaking a separate project focussed on this area. More information on this project can be found on the Council website.

How was the Master Plan developed? expand

Following community consultation in 2020, the design of a new Visitor Centre and related visitor infrastructure in Kamay Botany Bay National Park at Kurnell has been selected.

Installation of the Kamay 2020 sculptures at Kurnell

Three bronze sculptures have been installed as part of the 250th Anniversary of the encounter between Aboriginal Australians and the crew of the HMB Endeavour.

Kamay Botany Bay National Park is located at La Perouse and Kurnell, in Sydney. It covers approximately 456 hectares of the northern and southern headlands of the entrance to Botany Bay, including 13 kilometres of spectacular coastline. It is significantly the site where the first encounter occurred between Aboriginal Australians and the crew of the Endeavour. 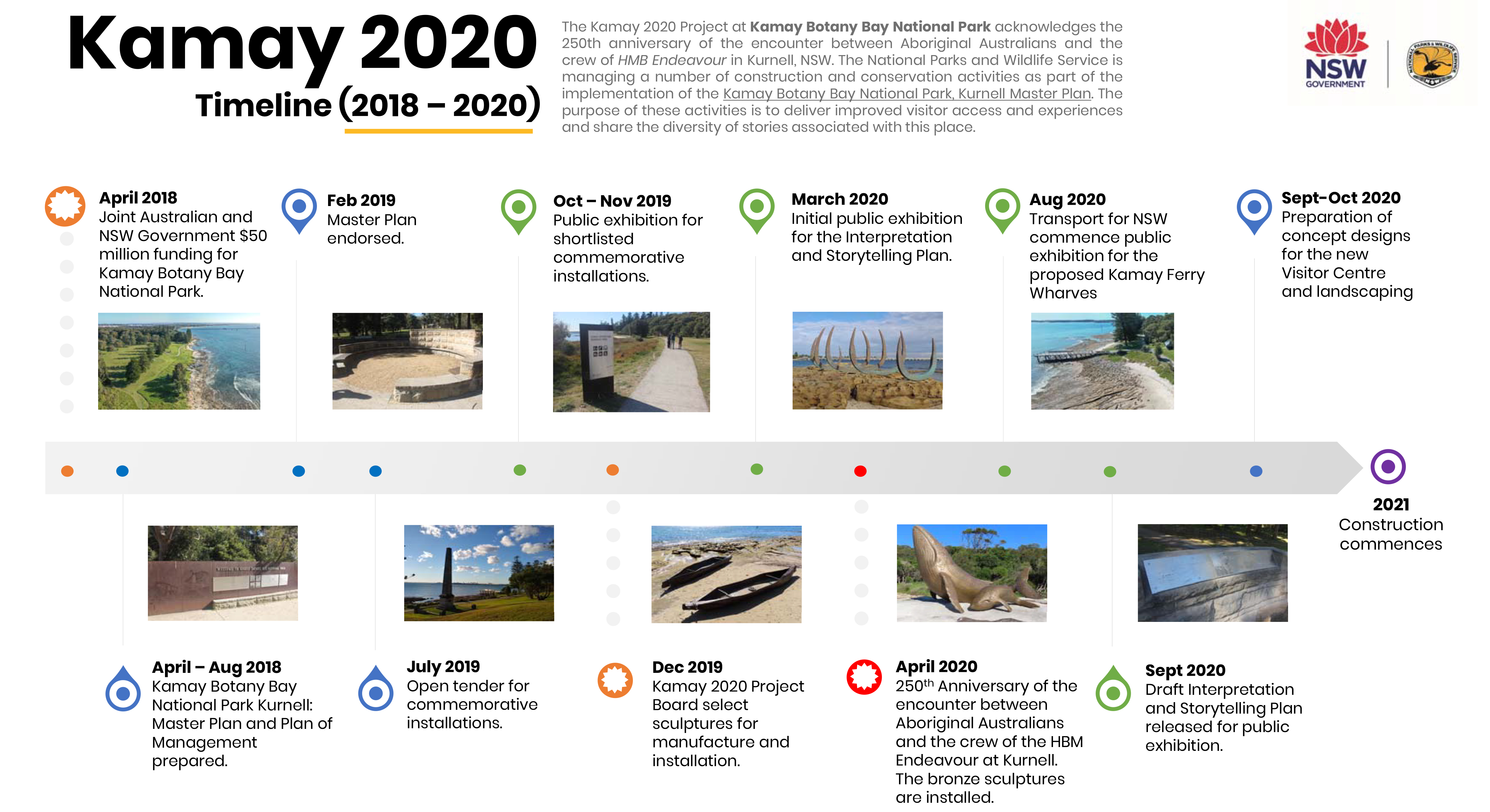