Coffs Coast beachgoers are being reminded of important visitors on our shores this spring as several threatened shorebird species lay their eggs on local beaches. 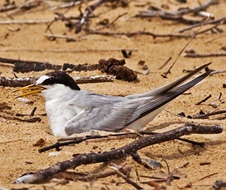 "Shorebirds such as endangered pied oystercatchers and little terns lay their eggs in shallow scraped-out nests in the sand.

"These nests and the eggs they contain can be hard to spot as they are perfectly camouflaged amongst the grasses, rocks and other beach debris found above the high tide mark.

NPWS works closely with other organisations to help protect shorebirds from threats such as predators and human disturbance.

There are simple ways beachgoers can do their part to help these little birds:

Pied oystercatchers with their black-and-white feathers, pink legs and red beaks are easily identified. Almost always seen in pairs, they live in Australia year-round and have already started laying eggs.

Meanwhile, endangered little terns fly thousands of kilometres from eastern Asia before nesting up and down the coast around places like Coffs Harbour.