For the first time in more than 40 years, the southern pygmy perch is again swimming in the Murrumbidgee catchment. 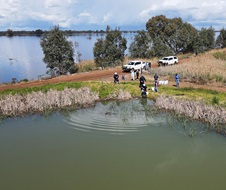 It is hoped that releasing 1,000 southern pygmy perch into 2 small wetlands adjacent to the larger Paika Lake, 20 kilometres north of Balranald, New South Wales, will be the first step in a long recovery journey for the species.

The southern pygmy perch has undergone rapid decline, and localised extinction at some locations, in the southern Murray Darling Basin due to competition and predation from exotic species, habitat loss or modification, and impacts of river regulation.

Paika Lake, resurrected through the NSW Government's Water for the Environment Program in partnership with adjacent landholders, was flagged as a suitable release site by Murrumbidgee environmental water managers.

Surveys conducted by NSW DPI Fisheries confirmed that the Paika Lake system is a suitable habitat for the locally extinct southern pygmy perch.

NSW DPI Senior Fisheries Manager Luke Pearce hoped the released fish not only survive but also establish a self-sustaining population in the small wetlands and adjacent lake. The area will be collectively referred to as the Paika Lake Management Unit. It contains drought-proof refuges for the pygmy perch to ensure that this effort is an enduring solution for the species.

"We hope they survive, breed, build up their numbers, and we get a lot more southern pygmy perch that we can then use to spread further around the Paika system or, if really successful, into other locations in that Lowbidgee area," Mr Pearce said.

Mr Pearce said the long-term objective is to establish several populations in key wetland sites in the Murrumbidgee system.

"There are no populations left in the Murrumbidgee, as far as we know, so this is about identifying key reintroduction sites." Mr Pearce said.

"Our long-term goal is to have multiple populations back in this part of the landscape and for them to persist, breed, and form a population structure as they would have historically. We want to restore that.

"It's one small step in what's going to be a long journey."

"Top-up flows of water for the environment are scheduled to commence in early summer. These flows will maintain habitat for waterbird and frog breeding and increase water levels in the southern pygmy perch sites," Mr Maguire said.

Landholder Peter Morton, whose property houses the holding dams, said the project was a testament to government and community working together.

Mr Morton said he was driven by a desire to restore the wetlands to their past glory.

"I am lucky enough to have good memories of diving in the Wakool River where we grew up as kids, amongst the reeds, the ribbon and different weed types and the clarity of the water – you could see for 10 feet," Mr Morton said.

"We'd be down there with a spotlight, and you'd see the gudgeons, the fluorescent fish and the big cod swim past as you were swimming."