Outcomes of environmental water events in the Gwydir catchment for 2017-18.

The 2017–18 water year was hot and dry with limited rainfall and low natural flows.

The Gwydir River system and its wetlands are located on a semi-arid floodplain, in a relatively low rainfall zone. This influences decision-making around water for the environment.

We managed the delivery of 47,038 megalitres of water and managed flows that:

Local water planning takes a flexible and responsive approach, operating on a rolling 3-year planning cycle. This approach acknowledges both a response to natural cues and the need to meet ecological water requirements across the range of systems and climatic conditions. 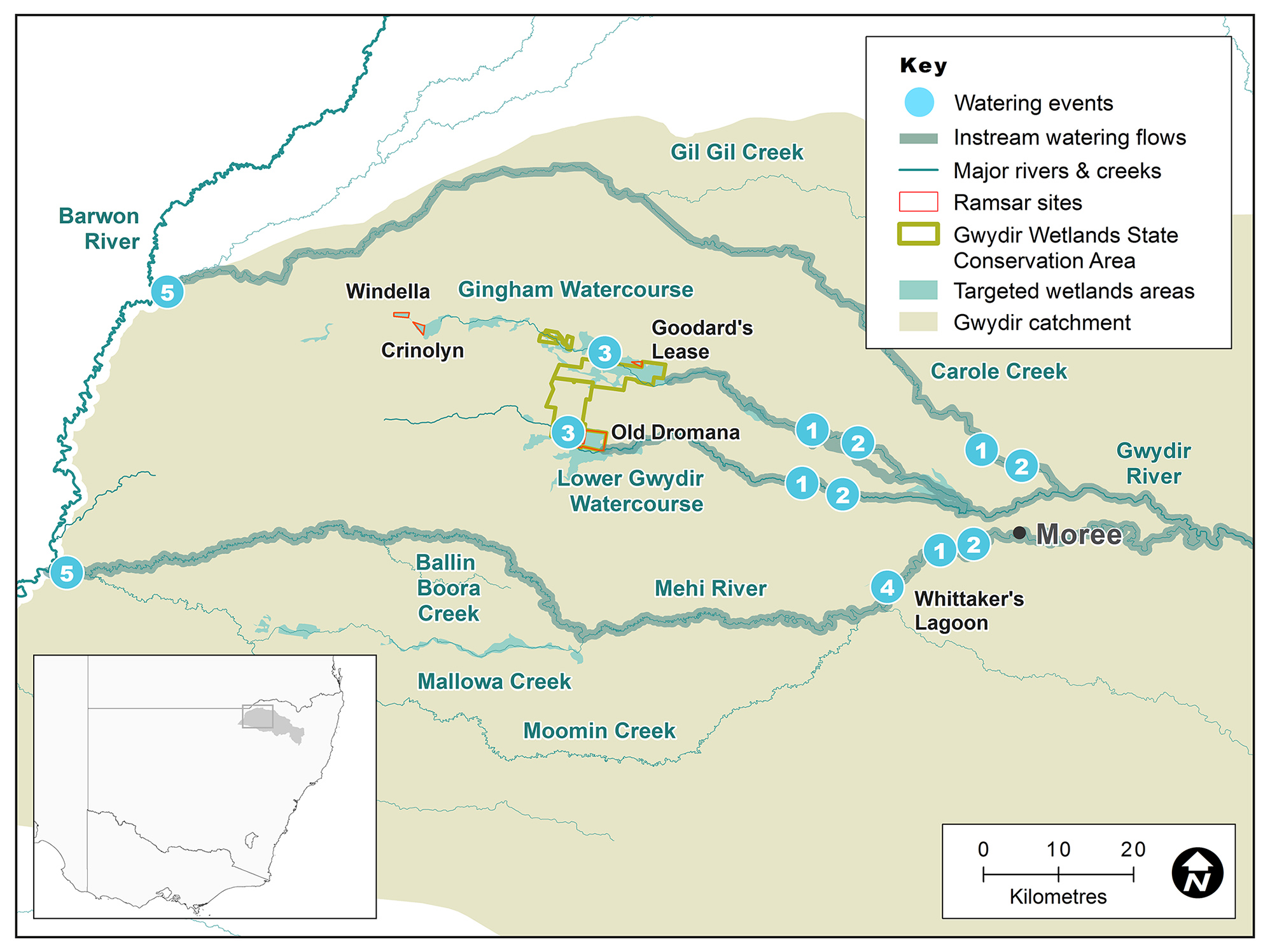 The Gwydir catchment began the 2017–18 year with access to healthy reserves of water for the environment thanks to good rainfall and natural higher flows early in the previous water year.

With forecasts of a prolonged dry period, the Gwydir Environmental Water Advisory Group developed watering strategies that provided flows around irrigation deliveries to better meet the needs of rivers and aquatic communities. These strategies:

The Gwydir catchment also contributed to the first coordinated environmental releases of water from the northern basin, connecting the river systems of the north with the Barwon–Darling rivers and Menindee Lakes. This provided a much-needed boost for refuge sites and the aquatic food web during an extended dry time.

This table provides a summary of environmental water delivered in the Gwydir catchment during the 2017–18 watering year. Volumes are indicative only.

In response to the dry season, water held in reserve was used to target habitat health and provide a more natural flow pattern to benefit native fish.
A review of river flow patterns downstream of Copeton Dam indicated:

In response, OEH managed deliveries of water in 2017–18 with the aim of returning a more natural flow pattern to the river. This included an ‘early season stimulus flow’ of 10,000 megalitres, triggered by inflows into Copeton Dam delivered from August to September 2017. This flow primed the system and restored a pattern of small pulses to the river.

A ‘stable fish low flow’ of 10,040 megalitres was delivered in November 2017. This built on the early season stimulus flow and occurred between high-volume irrigation releases when river flows are usually low or cease for a prolonged period.

In early 2018, dry conditions prevailed across the northern Murray–Darling Basin placing significant stress on the Barwon–Darling river system. As the dry continued, extensive reaches of the Barwon and Darling rivers, downstream of Brewarrina, ceased to flow. By March, northern tributary flows were in decline.

To support the health of the Barwon and Darling rivers, the Gwydir Environmental Water Advisory Group endorsed the release of water from held Gwydir environmental water accounts.

This joint effort by the NSW and Australian Governments saw water released from held environmental water accounts into the rivers of the northern basin from mid-April to June, which provided a much-needed drink to the Barwon–Darling rivers.

The flow aimed to:

The flow began with a release of 4300 megalitres of Commonwealth Environmental Water Office (CEWO)-owned water from the Border Rivers catchment in mid-April. This water was held in Glenlyon Dam, the headwaters of the Dumaresq and Macintyre river systems.

In early May, the Gwydir catchment contributed 18,900 megalitres to the Northern Basin Connection Flow, delivered via the Mehi River and Carole Creek. New South Wales contributed 6600 megalitres and CEWO 12,300 megalitres from general and high security accounts in the upstream Copeton Dam, on the Gwydir River.

This delivery of water for the environment: