Use of water for the environment in NSW: Outcomes 2017–18

This report summarises the use of water for the environment across New South Wales in the 2017–18 water year and highlights the ecological outcomes achieved.

The rivers and wetlands of inland New South Wales are home to a unique array of native plants and animals. They rely on our waterways to survive the boom and bust cycles that shape the Australian landscape.

Water for the environment is a share of the water available in our dams and rivers that is managed to support the ongoing health of our rivers and wetlands.

This Outcomes 2017–18 report details our work to support river systems and meet the needs of native plants, native fish, waterbirds and other water-dependent wildlife so they can be enjoyed by all, now and into the future. 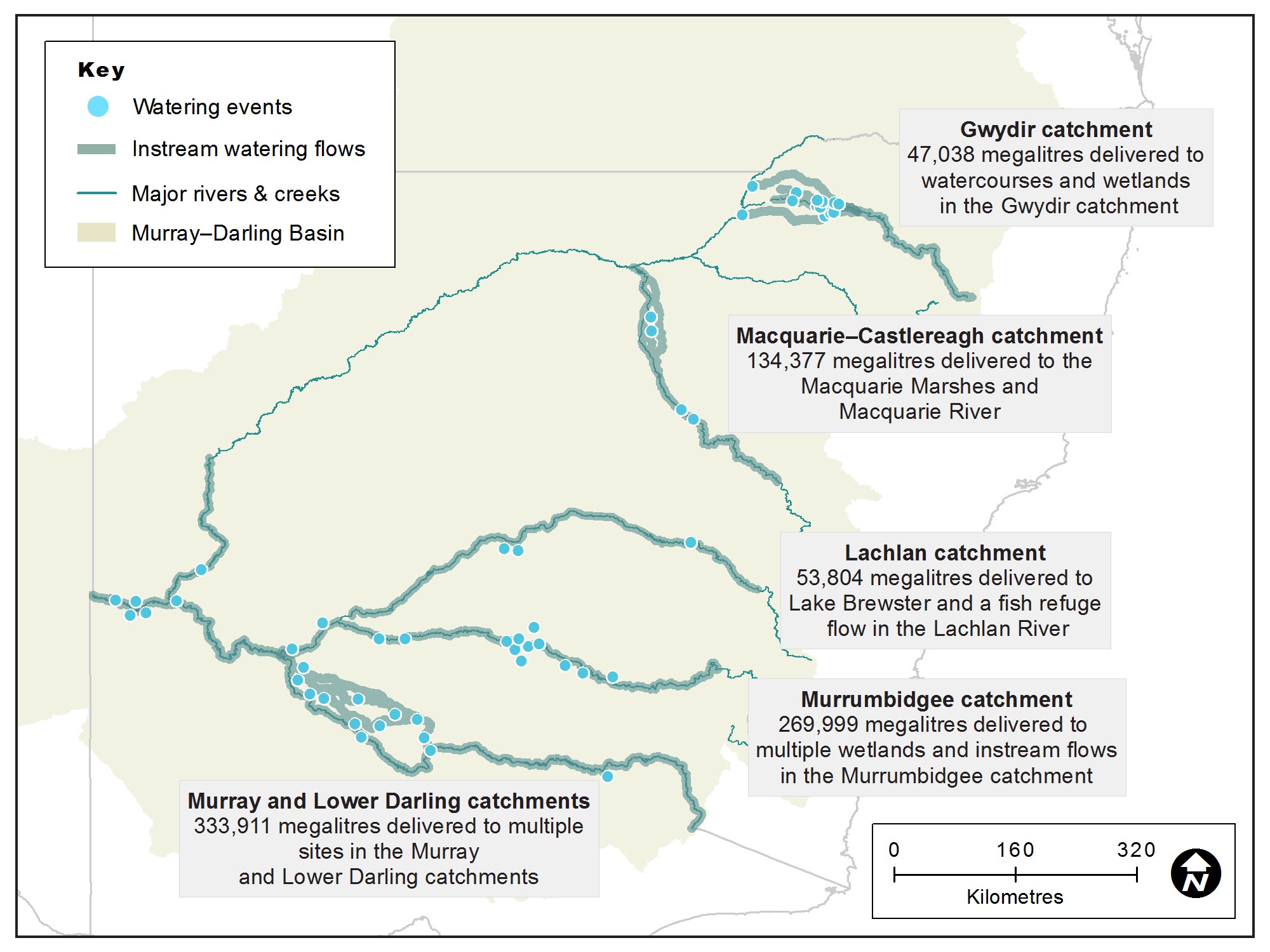 Restoring the health of rivers and wetlands for future generations is the aim of our water for the environment program.

In 2017–18, the Office of Environment and Heritage (OEH) managed the delivery of water for the environment to key sites across the state. We responded to a number of rainfall events by adding water for the environment to natural inflows and enhancing outcomes for native plants and animals. This provided opportunities for native fish and waterbirds to feed and breed, plants to grow and set seed, and floodplains to release essential nutrients into the food chain.

OEH manages water on behalf of the NSW Government, the Commonwealth Environmental Water Office and The Living Murray (TLM) program.

Although warm dry conditions were forecast, the water year began with reasonable reserves of water across much of the state because of widespread rain in 2016.

We worked with community advisory groups to build on the successes of previous years while holding some water in reserve for future dry times.

By the end of 2017, water managers were again planning for dry conditions and low water availability. In consultation with community advisory groups, we put in place adaptive management plans. These plans aim to maintain critical refuge habitat and retain the gains made after the 2016 flood.

It was a dry year in the Lachlan catchment with many lakes and ephemeral creeks drying down.

A highlight of the year was the recovery of aquatic plants at the Lake Brewster outflow wetlands. For the first time since the outflow wetlands were constructed, water for the environment provided the trigger for extensive beds of water milfoil, ribbon weed, rushes and water grasses to establish.

In addition to the strong wetland plant response there was another pelican breeding event – for which the outer wetlands provided some important feeding areas for the birds.

Water for the environment was released in spring and early summer in 2017-18 and this:

The Gwydir catchment contributed flows to the Northern Basin Connectivity event in 2017–18. This joint effort between the NSW and Australian Governments aimed to support river health and connect rivers in the Barwon–Darling system. Water was delivered into the Barwon River via the Gwydir and downstream of the Mehi River and Carole-Gil Gil creeks, giving native fish access to additional food and habitat along the delivery path and creeks within the lower catchment.

Rainfall and dam inflows in the catchment provided triggers for managed watering events. These events, plus follow-up flows and dam releases:

OEH also managed a delivery of water into the Peel River. This release coincided with releases from the Keepit Dam on the Namoi River, which:

A year in the catchments

Our monitoring, evaluation and reporting (MER) program captures important data that guides how we manage water for the environment and track our progress toward meeting Basin Plan and NSW environmental watering objectives.

It is designed to meet Open Government principles including transparency, easy access to information, and improved collaboration and participation. Major themes addressed by the program are:

When water for the environment is used it’s monitored to measure native plant and animal outcomes, waterflow movement and extent. Lessons learned from our monitoring program inform future management decisions.

We collaborate with other agencies, scientists and communities to build knowledge of the systems where water for the environment is used. In the 2017–18 water year we worked closely with field naturalist groups, bird watchers and independent scientists to:

We are also looking at more innovative ways to monitor watering events, such as identifying better methods to determine productivity in rivers.

Our MER program has been developed to help co-ordinate and guide work to determine how water for the environment contributes to achieving environmental outcomes. It provides a framework for the development of a common foundation for MER programs across New South Wales that support sound policy, planning and regulatory decision-making.

This framework also guides individual MER plans for each New South Wales basin catchment and allow us to meet Basin Plan as well as other policy and planning reporting requirements.

The Office of Environment and Heritage is the lead agency for the delivery of all water for the environment in New South Wales. This includes water held by the Commonwealth Environmental Water Office.

OEH’s environmental water business model allows for the periodic trading of water allocation in the accounts of OEH water access licences to pay for some of the costs of managing these licences. Funds may also be used to purchase water or implement small-scale projects that improve environmental watering outcomes.

An agreement was reached with water users to protect high-priority wetlands in the mid-Murrumbidgee reach which involved the transfer of 750 megalitres.

OEH also purchased 2297 megalitres of Lachlan allocation and used it to support pelicans in Lake Brewster, a site which dried out earlier than expected.

Trade will continue in future to manage the portfolio for maximum environmental benefit.

These include, but are not limited to the:

Further information about some of our partner agencies is on our terms and definitions webpage.