Feral cats are a major threat to biodiversity and have caused the extinction of several species of native Australian mammals and birds.

What are feral cats?

Cats (Felis catus) are an introduced predator that can devastate native animal populations. Feral cats are the same species as domestic cats but live, hunt and breed in the wild. They are carnivores and exceptional hunters. Cats are solitary animals and mainly nocturnal.

Cats are found all over Australia, including many offshore islands. They survive and thrive in a diverse range of habitats, including deserts, grasslands and woodlands. Populations of feral cats continue to grow because they are highly adaptable and female cats reproduce throughout their adult lives.

Cats are a pest animal because they hunt and prey on native species.

Cats are one of the primary causes of the decline and extinction of many Australian native species over the last 200 years, including species of hopping-mice, small rodents, hare-wallaby, bettong, bandicoot and several species of birds. They have had a serious impact on populations of bilby, mala and numbat.

Cats have also caused or contributed to the failure of numerous attempts to reintroduce native animals into their natural habitat, such as the attempted reintroduction of the rufous hare-wallaby in central Australia.

Cats are widespread across Australia and pose a significant threat to small native mammals and ground-nesting birds. They are present in very high numbers in urban and outer-urban areas and threaten the survival of native animals in nearby bushland.

Predation by feral cats has been listed as a key threatening process in New South Wales by the NSW Scientific Committee.

Why cats are a dangerous invasive species 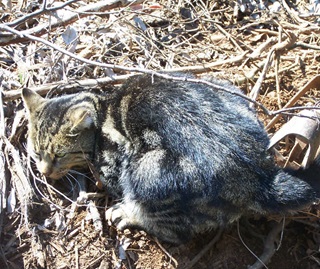 As cats are widespread, management focuses on the reduction of impacts in priority areas. Management of feral cats for the protection of threatened species is prioritised through regional pest management strategies and the Saving our Species (SOS) program.