Vulnerable estuaries are susceptible to land-based pollutants such as urban stormwater or agricultural runoff and need a higher level of management to protect and maintain them. 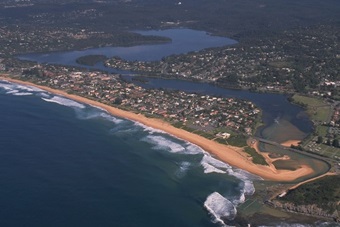 We have created a dataset that identifies 101 vulnerable estuaries, including intermittently closed and open lakes and lagoons (ICOLLs). The dataset:

It is important to maintain and/or restore the water quality and ecological condition of vulnerable estuaries so they remain suitable for use by local communities and industries. The estuaries are:

Why estuaries are vulnerable

The vulnerability arises from physical characteristics of an estuary and its surrounding catchment area. These characteristics can determine where and how pollutants are transported and retained in an estuary. These include:

These characteristics combine to influence the water in an estuary. For example, water levels can increase and sediments shift with tidal flushing. The extent and rate of this flushing is dependent on whether the estuary entrance is open or closed to the sea. Similarly, the retention of pollutants from run-off will increase in an estuary that has a closed entrance channel.

ICOLLs with a small catchment-to-estuary surface area ratio are more likely to have limited connection to the sea and will be more susceptible to a build up of land-based pollutants.

How we created the dataset

These data were used to calculate:

The calculated measures were then used as inputs to 6 well-established vulnerability assessment methods based on studying the effect of many variables occurring at the same time (multivariate statistics) and grading that uses a technique based on experience (heuristic grading). An estuary identified as vulnerable in more than 4 of 6 assessment methods was considered vulnerable to land-based pollutants.

Geospatial data of the vulnerable estuaries was developed by extracting the water boundary of each estuary from the Estuaries dataset, available on the NSW Government Sharing and Enabling Environmental Data in NSW (SEED) data portal. The water boundary was defined based on whether an area was discernible in the 1:25,000 topographic map series available from the Land and Property Management Authority.

Key attributes of the dataset

The dataset has 4 key attributes:

The academic citation for the dataset and this webpage is:

For questions on the dataset email:
data.broker@environment.nsw.gov.au or call 131 555.

This dataset and the relevant metadata are publicly available on the NSW Government SEED data portal.