The wedge-tailed eagle can be found all over Australia, but it is more commonly found in open woodland areas with a good grassy groundcover. 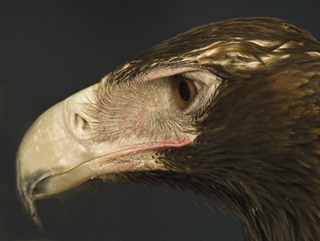 With a wingspan of up to 2.5 metres, the wedge-tailed eagle is the largest bird of prey in Australia. It soars and glides majestically in air currents for up to 90 minutes at a time, reaching altitudes that can go beyond 2,000 metres.

They have a distinctive wedge-shaped tail, and legs that are feathered all the way to the base of the toes. Adults are mostly dark blackish-brown with females (4.2kg - 5.3kg) being larger and heavier than males (3.2kg up to 4kg).

Wedge-tailed eagles are generally quiet birds, and their call is quite weak for the size of the bird. However, they are capable of making whistling noises and loud yelps and squeals.

Between 80 and 90% of a wedge-tailed eagle's diet is made up of ground-dwelling animals, including mammals and reptiles. Rabbits, wallabies and small kangaroos form the main part of their diet, although they will also eat snakes, lizards, large birds, possums, foxes and feral cats.

When hunting, the wedge-tailed eagle bears down on its prey in a long, slanting swoop. Nearly all prey is caught on open ground, with the eagle usually feeding on the spot. Carrion (the flesh of dead animals) is also a favourite meal, and as many as 30 to 40 wedge-tailed eagles can be found feeding on one carcass. They are often attracted to the carcasses of kangaroos lying beside roads. As a consequence, some wedge-tailed eagles are killed by speeding vehicles.

Wedge-tailed eagles will eat sheep, but they usually only attack weak, dying or dead animals. Research by the CSIRO has shown that sheep account for less than 9% of the wedge-tailed eagle's diet, which has little effect on the domestic sheep industry. Most of the sheep meat in the eagle's diet is from carcasses, dying sheep, or road fatalities on unfenced inland roads.

Wedge-tailed eagles usually spend the hours around sunrise and sunset viewing their territory from the treetops. They hunt early, and for the rest of the day they either sit on exposed perches or circle and glide in the air.

Although they spend little time maintaining their territory, wedge-tailed eagles will advertise their presence by flying at high altitudes and gliding along the boundaries of their range. 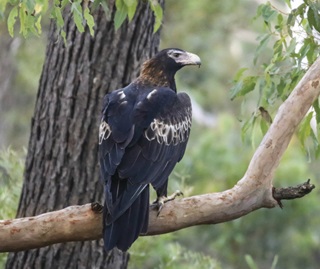 The eagles' nest consists of a large platform of sticks in the fork of a tree. Both sexes repair the nest, and the male lines it daily with fresh leaves. He will also occasionally sit on the eggs to incubate them, relieving the female from this task. During the incubation period, and after the chicks have hatched, the male does all the hunting. Upon his return to the nest, the prey is shredded by the female and fed to the young.

In a good season, 2 chicks may be reared. Usually only the fittest survives while the other chick starves to death. Sometimes the older and larger chick may kill its sibling. In drought-affected areas, wedge-tailed eagles may not breed at all for several years.

In earlier times, the wedge-tailed eagle was considered to be vermin or a pest because of its reputation as a killer of lambs and sheep.

People were encouraged to kill them, and it has been estimated that at one stage 30,000 wedge-tailed eagles were destroyed in a year.