Feral goats threaten the biodiversity of our native animals and plants. They also pose a risk to livestock and agriculture.

What are feral goats? 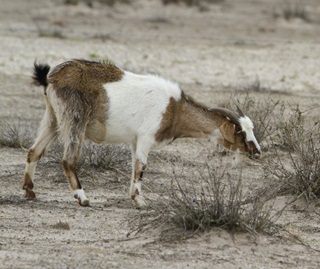 Goats are not native to Australia. They were introduced to New South Wales as domestic livestock from the time of European settlement and many more have been imported since then. Wild populations of feral goats have become established by goats that have either escaped or been released from domestic herds on farms. They are present across much of Australia and are particularly prevalent in western New South Wales.

Feral goats are rated by the National Parks and Wildlife Service (NPWS) as a high priority pest issue because they:

Competition and habitat degradation by feral goats has been listed as a key threatening process in NSW by the NSW Scientific Committee.

The successful control of feral goats both within our national parks and on neighbouring properties relies on a cooperative approach between the NPWS private landholders, other agencies such as Local Land Services and the community.

As feral goats are widespread, management focuses on the reduction of impacts in priority areas. We prioritise management of feral goats for the protection of threatened species through our regional pest management strategies and Saving our Species (SOS) program.

Strategies used to reduce and control the numbers of feral goats include:

Fencing
NPWS research in western NSW has demonstrated that goats rarely travel more than 3.5 km from a water source and are therefore highly dependent on artificial watering points such as tanks and bores. Strategic closure of on-park artificial watering points, and goat-proof fencing on NPWS boundaries near watering points has reduced immigration into parks from surrounding properties and led to a significant decrease in goat numbers on some key national parks.

Mustering
Feral goats like to gather in herds. In open flat country, goat herds can be mustered into holding yards with motorbikes and working dogs.

Trapping at water supplies
Traps at watering holes can be an effective method of control. Traps consist of a goat-proof fence surrounding a watering point that is entered through a one-way gate or ramp. Traps must be cleared regularly to avoid stress and starvation in the captured goats.

Shooting
Aerial shooting using helicopters is extremely effective and can result in a rapid and substantial reduction in goat numbers. Ground shooting is labour intensive but can produce good results if control programs are well planned and the effort is maintained.