Rabbits are widespread across NSW. We work to reduce their impact on native plants, animals and the environment.

What are feral rabbits? 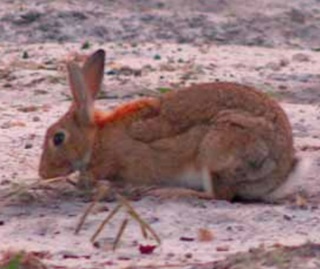 The European rabbit (Oryctolagus cuniculus) is an introduced species, which was first brought to Australia with the First Fleet in 1788 as domesticated livestock. Over three-quarters of the State is inhabited by feral European rabbits.

Rabbits prefer to live in areas with short grasses, including natural grasslands and rural pastures. However, they are highly adaptive and have established wild populations in many different environments, including woodlands, deserts, coastal plains, subalpine areas and subtropical grasslands. They are also found in large numbers in and around urban and agricultural areas.

Because of their adaptability and their ability to reproduce quickly in large numbers, rabbits can rapidly recolonise areas following pest control activities.

Rabbits are one of Australia's most destructive pest animals. They have a significant negative and costly impact on agriculture through overgrazing and they endanger many threatened plant species and ecological communities.

Rabbits impact our national parks and reserves by:

Rabbits have contributed to the decline or disappearance of several native animal species in New South Wales, such as the greater bilby, yellow-footed rock-wallaby, southern and northern hairy-nosed wombats, the malleefowl and the plains-wanderer.

Competition and grazing by the feral European rabbit has been listed by as a key threatening process in NSW by the NSW Scientific Committee.

Managing rabbits in our national parks

The National Parks and Wildlife Service (NPWS) uses biological control, mechanical methods such as warren-ripping and rabbit-proof fences, poisoning, trapping and shooting. Successful control of rabbits in our national parks relies on a cooperative approach between the NPWS, other agencies, private landholders and the community.

We work closely with the NSW Department of Primary Industries (DPI), Local Land Services (LLS), local councils and Landcare groups to effectively facilitate the spread of Rabbit Haemorrhagic Disease Virus (RHDV) also known as calicivirus. Together we ensure that practical follow-up control programs are carried out with conventional techniques such as warren-ripping, fumigation and poisoning to maximise success.

As rabbits are widespread, management focuses on the reduction of impacts in priority areas. Management of rabbits for the protection of threatened species is prioritised through our regional pest management strategies and Saving our Species (SOS) program.

NPWS has rabbit control programs in a large number of national parks across New South Wales.