Feral deer are introduced species that threaten biodiversity and cause significant damage to the environment.

What are feral deer? 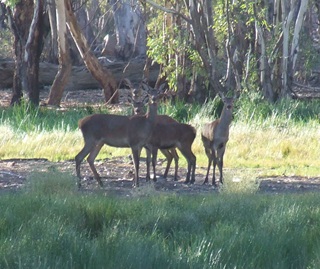 Deer are not native to Australia. They were introduced to New South Wales as domestic livestock with European settlement.

Five species of deer have established feral populations in NSW:

A sixth species, the hog deer (Axis porcinus), has been recorded in NSW but established populations are unknown.

Why are deer a pest?

Deer have a range of major negative impacts in our parks and reserves because they:

Herbivory and environmental degradation caused by feral deer has been listed as a key threatening process in NSW by the NSW Scientific Committee.

Managing deer in our national parks

The National Parks and Wildlife Service (NPWS) is responsible for the management of feral deer in our national parks. This is important not only for the protection of our native species and environment but for agricultural and urban areas close to our parks.

Feral deer can pose a threat to park neighbours and agriculture by competing with livestock for grazing resources, dispersing weeds, damaging crops and fences and potentially spreading disease. In park land close to urban areas, wild deer can pose a risk to drivers and can damage private gardens and public amenities.

As deer are widespread, management focuses on the reduction of impacts in priority areas. Management of deer for the protection of threatened species is prioritised through our regional pest management strategies and Saving our Species (SOS) program.

Deer control is undertaken using aerial-shooting and ground-shooting. NPWS shooting programs have been developed in consultation with RSPCA NSW to ensure that they are as effective, safe and humane as possible.