Lantana impacts biodiversity in NSW and is listed as a Weed of National Significance. 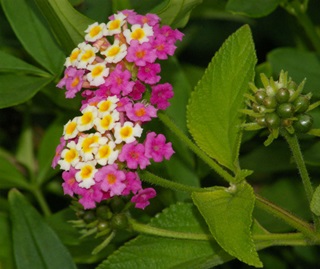 Lantana (Lantana camara) is a large flowering shrub native to Central and South America that readily grows into thickets. After being brought to Australia as an ornamental garden plant in about 1841, the weed quickly escaped domestic cultivation and within 20 years was established in the wild. Lantana was first declared noxious around 1920 and by the 1950s it had spread over more than 1600 kilometres of the eastern Australian coastline.

In 2006, the invasion, establishment and spread of lantana was listed as a key threatening process (KTP) by the NSW Scientific Committee. It thrives in warm environments with high rainfall where the weed grows along forest edges, penetrates disturbed rainforest and invades open eucalypt woodlands and pastures. Within Australia, it has invaded more than 4 million hectares.

Why is lantana a problem?

Lantana forms dense thickets that exclude native species, leading to its complete dominance of the understorey and eventually the canopy. It has also been estimated that graziers spend $17.1 million a year on lantana control and lose more than $104 million in production due to lantana invasion. It is spread mainly by birds.

Managing lantana in our national parks

The NSW National Parks and Wildlife Service (NPWS), now part of the Office of Environment and Heritage, applies an integrated approach to manage the weed, using the regional pest management strategies and the Saving our Species program to combine different control methods to achieve the best results and minimise its impact on native plant species. Many lantana control programs are run in conjunction with local communities and councils. When management is undertaken for biodiversity conservation, five-year site management plans are completed.