Huge numbers of birds live in our estuaries and use them to provide habitat, food and a place to rest.

Waterbirds and shorebirds rely on waterways such as estuaries to feed, roost, breed and recuperate from long flights.

The number of birds found in estuaries changes with seasons and environmental events. Significant numbers of migratory birds arrive in our estuaries at different times throughout the year.

Because of their position at the top of the food web, large numbers of waterbirds in an estuary indicates the ecosystem is healthy and biologically productive.

Estuaries and their surrounding habitat provide an important food source for waterbirds.

For example, herons, bitterns and egrets feed on insects and small animals in saltmarshes, and wading birds like the bush stone-curlew, double-banded plover, bar-tailed godwit and sandpipers also forage in the shallow waters in saltmarshes.

Wading birds, such as the eastern curlew feed on fish, shrimps and other invetebrates in seagrass beds.

Freshwater vegetation in the upstream reaches of estuaries provides food for common waterbirds such as ducks, geese, black swans and common sandpipers.

Wading birds, such as the whimbrel and greenshank, feed on fish, crustaceans and other invertebrates in the shallow waters around mangroves.

The little penguin, which lives along the NSW coast south of Port Stephens, is often seen around the Hawkesbury region and Sydney. Breeding colonies are found on Lion Island near Pittwater and Montague Island near Narooma as well as on the mainland at Manly. Little penguins feed over a relatively large range from their nests, and often enter estuaries to catch squid and small fish. 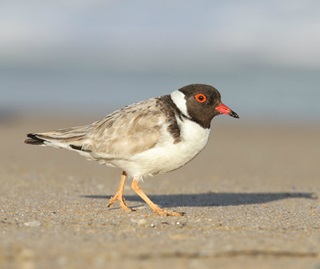 The areas that surround estuaries, such as beaches, dunes and sandspits provide important nesting areas for waders and shorebirds such as the little tern, bush stone-curlew and hooded plover.

Seabirds occasionally seek refuge in estuaries during periods of rough weather. For example, albatrosses, petrels and shearwaters have been recorded at Botany Bay.

Waterbirds such as herons, ibises and cormorants use mangroves for roosting and nesting. Mangroves are also used by honeyeaters and warblers.

Estuaries provide an ideal place for migratory birds such as the eastern curlew to rest after their long journeys. Many species of migratory waterbirds spend their non-breeding period in our estuaries and wetlands building up fat reserves before flying north to breed.

Human activities can threaten feeding and nesting sites for shorebirds. For example:

Sea level rise in response to climate change may reduce the extent of shorebird habitat by increased erosion of shorelines and inundation of roosting and nesting sites. The shoreward migration of mangroves and saltmarsh in response to rising sea levels may also impact migratory and shore birds by reducing habitat and feeding opportunities.