Scotch broom is a highly invasive weed. Infestations are found in NSW, including alpine and subalpine areas. 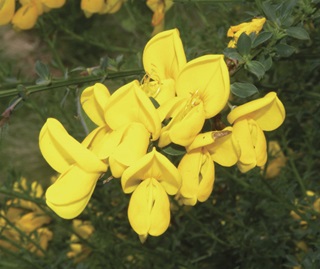 The common broom, also called Scotch broom or English broom (Cytisus scoparius) is a perennial shrub native to western and central Europe. Broom plants are a type of pea that have been cultivated for their ornamental features. Several species of broom have been introduced to Australia and have become widespread invasive weeds in the southern states.

Scotch broom (Cytisus scoparius) is a large shrub, up to 4 metres, with bright yellow flowers. Plants usually have numerous straight young branches which gives the weed its common name. It occurs mainly in cool temperate regions, at high altitudes or along the edges of watercourses. In New South Wales large areas of native vegetation have become infested with the weed. It is particularly prevalent along the Great Dividing Range in areas such as the Blue Mountains, Barrington Tops, Kosciuszko National Park and the Central and Southern Tablelands.

Why is scotch broom a problem?

Scotch broom is difficult to control. It is highly invasive and spreads rapidly because it:

Scotch broom is one of the major weed threats to the alpine and sub-alpine areas of Australia. The weed is spread mainly through cross pollination but also by animals, humans, farm machinery and in water ways, such as creeks. Scotch broom has been listed as a Weed of National Significance and threatens many threatened species across NSW.

The invasion and establishment of Scotch broom is listed as a key threatening process in NSW.

The NSW National Parks and Wildlife Service (NPWS) uses an integrated approach to manage the weed, combining different control methods to achieve the best results and minimise its impact on native plant species.
Scotch broom management is guided by the Broom Management Manual (PDF 15.4 MB) which provides information on biology, ecology and effective control of the brooms listed as Weeds of National Significance and highlights other new and emerging broom weed threats. It also includes advice on planning, holistic management, restoration and monitoring, as well as case studies that provide real examples of the successes and challenges of broom weed control.