Feral pigs threaten our native animals and plants and can cause significant damage to the landscape and environment.

What are feral pigs?

Feral pigs are an invasive species that was introduced to Australia as domestic livestock.

Feral pig populations are found throughout New South Wales and are most prevalent in the northern and western areas of the state.

They prefer to live in wetland, floodplain and watercourse environments.

Feral pigs can cause severe damage to the environment. They are considered a pest because they:

Predation, habitat degradation, competition and disease transmission by feral pigs has been listed by the NSW Scientific Committee as a key threatening process in NSW. 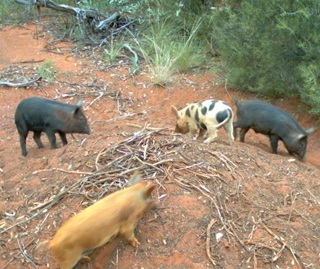 The National Parks and Wildlife Service (NPWS) has developed control programs for parks and reserves where feral pigs pose a significant problem. Many of these programs are carried out with local landholders and other government or non-government agencies such as Local Land Services (LLS).

As feral pigs are widespread, we focus on the reduction of impacts in priority areas. Management of feral pigs for the protection of threatened species is prioritised through the our regional pest management strategies and Saving our Species (SOS) program.

Shooting
Aerial shooting using helicopters is extremely effective and can result in a rapid and substantial reduction in pig numbers. Ground shooting is labour intensive but can produce good results if control programs are well planned and the effort is maintained.

Trapping
Trapping can be an effective method for pig control, but resources need to be allocated to regularly checking traps and despatching pigs.

Baiting
Baiting using “pigout” and grain is also used in many areas across NSW, however some effort must be put into free-feeding to get the pigs accustomed to the bait matrix prior to the poison being applied.