The control of cane toads in our national parks is a high priority.

What are cane toads? 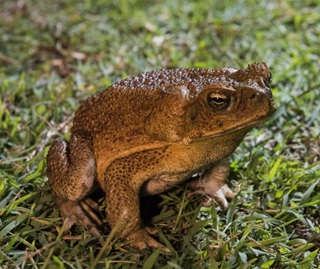 Cane toads (Rhinella marina, formerly Bufo marinus), are an invasive species. Introduced to Queensland in 1935, they are now widespread in north-eastern New South Wales and are spreading further south and west.

Cane toads have no natural enemies and their spread could have a devastating impact on our native animal species and ecosystems.

Cane toads are a threat to biodiversity because they are poisonous, predatory, adaptive and competitive.

Poisonous
Cane toads are toxic at all stages of their life cycle, as eggs, tadpoles, toadlets and adults, and their ingestion can kill native predators. Cane toads have been linked to the decline and extinction of several native predator species in the Northern Territory and Queensland, including the northern quoll. Their toxin is strong enough to kill most native animals that normally eat frogs or frog eggs, including birds, other frogs, reptiles and mammals. They pose a risk to both native animals and pets.

Adaptive
Cane toads are robust and can live in a wide variety of habitats. They thrive in urban and disturbed areas. They breed quickly which allows them to rapidly colonise and dominate an area.

Competitive
Cane toads compete with native species, for both food and habitats. They have a voracious appetite and can eat a wide variety of foods, depleting the food source for other animals. Native frogs are particularly vulnerable to the threat of cane toads both as a food source for the toad and as a competitor for other food sources.

The invasion and establishment of cane toads in New South Wales has been listed as a key threatening process in NSW by the NSW Scientific Committee.

The complete eradication of cane toads in NSW is not feasible given their ability to thrive in a broad range of habitats, their capacity to reproduce in large numbers and their current widespread distribution. Also, there are insufficient resources to control cane toads effectively in all areas where they coexist with native wildlife.

The management of cane toads in national parks and on other land tenure is guided by the Saving our Species (SoS) program.

The SoS program will aim to:

Comprehensive best practice guidelines for the removal of cane toads from our national parks are found in Eradicating cane toads in NSW outside their current range of distribution.

A summary of the guidelines is also available for councils, state agencies, industry or other landholders in areas outside the current range of the toad’s distribution.

Currently, there is no broad-scale control method or biological control agent for the effective widespread reduction of cane toads that would not harm native species.

Cane toads must be collected and removed by hand. Traps and barrier fencing can be used to contain them but vary in effectiveness. According to recent research by the University of Sydney, refrigeration followed by freezing is the most efficient, effective and humane method of cane toad euthanasia.