The industry-funded Upper Hunter and Newcastle Local air quality monitoring networks were established in 2011 and 2014, respectively, specifically to monitor local industrial and other pollution sources in the region. Due to the proximity of industrial sources, the national standards do not apply directly to the data collected at these monitoring stations. However, EES recognises that there is a desire within the community to know how air pollution levels at these stations compare against the standards. Therefore, EES uses national benchmarks (i.e. ambient air quality standards) in this section to evaluate air quality levels throughout the Hunter Valley.

More information on these networks can be found on the EES website, including seasonal newsletters published on a regular basis.

Sulfur dioxide and nitrogen dioxide met the relevant hourly, daily and annual national standards in the Lower and Upper Hunter regions during 2019.

Daily average PM10 levels were above the benchmark on 71 days at one or more Hunter large population centres (excluding Stockton). These occurred on:

At Stockton, the daily PM10 average was over the benchmark on 102 days, predominantly affected by sea salt under onshore air flows, bushfire smoke and long-range dust transport. Refer to the Stockton tab for more information.

The maximum daily PM10 averages recorded in the Hunter at large population centres occurred on 26 November 2019, due to a combination of bushfire smoke and widespread dust. The maximum PM10 levels in the Upper Hunter and Newcastle regions on this day respectively were 246.7 µg/m3 at Aberdeen and 169.5 µg/m3 at Stockton.

Annual average PM2.5 levels were above the benchmark at all Hunter large population centres. Annual averages ranged from 10.4 µg/m3 at Wallsend to 13.0 µg/m3 at Stockton.

Daily average PM2.5 levels were above the benchmark on 45 days at one or more large population centres. These occurred on:

During winter, the events occurred on:

From the end of October, the region was affected by smoke from extensive bushfires during the bushfire emergency period and dust storms.

In the Upper Hunter, the maximum daily PM2.5 average of 80.0 µg/m3 occurred at Camberwell small community station on 21 November, due to bushfire smoke. On this day Muswellbrook and Singleton recorded PM2.5 daily averages of 77.4 and 69.3 µg/m3, respectively.

The Upper Hunter recorded 120 days when the daily PM10 levels were over the benchmark at one or more sites. Camberwell recorded the highest number of days over the PM10 daily benchmark in the region, with a total of 87 days.

Overall, there was a 64% increase in the number of days over the benchmark in 2019, compared with 2018 (73 days). The increase was due to the prolonged and consistent drought conditions experienced throughout New South Wales in 2019, along with smoke impacts from the extensive bushfires burning from late spring. This resulted in an increase in both particles transported into the region and particles from local industrial dust sources.

All sites in the Upper Hunter, except Bulga, recorded their highest daily PM10 average on 26 November. On this day, the region was affected by an extensive dust storm, bushfire smoke and local industrial dust sources under strong winds. The highest PM10 daily average on this day was 446.1 µg/m3, at Maison Dieu, with the highest hourly peaks occurring under strong north-northwest winds.

Camberwell recorded a maximum daily PM2.5 average of 80.0 µg/m3 on 21 November, due to bushfire smoke. 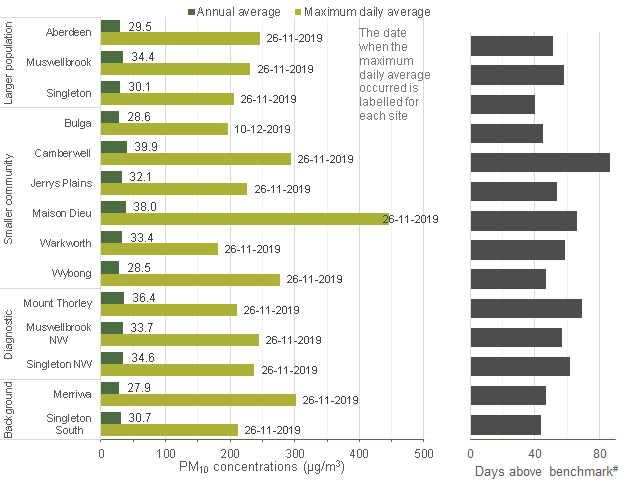 Note: # Days above the benchmark have not been divided into exceptional and non-exceptional events, as the NEPM goals do not apply to these sites.

The Stockton air quality monitoring station is part of the industry-funded Newcastle Local Air Quality Monitoring Network, focused around the Port of Newcastle. The station is approximately 300 metres from the ocean and 20 metres from Hunter River. Due to its proximity to the coast, high PM10 particle levels recorded at Stockton most often occur under onshore north-easterly winds. The Lower Hunter Particle Characterisation Study found that the largest contribution to PM10 at Stockton was sea salt.

Stockton particle levels were greatly affected by extensive bushfire smoke from late spring during the bushfire emergency period, in common with particle levels at other stations in Newcastle and the Local Hunter. There were 35 days over the daily PM10 standard at Stockton that were affected by bushfire smoke in 2019, with most of these (31 days) from 29 October to 31 December.

In addition, elevated particle levels in the region were affected by the long-range transport of dust from drought-affected regions in the west and north-west of the State. There were 13 days over the daily PM10 standard at Stockton that were affected by dust.

Hourly ammonia (NH3) levels were below the assessment goal of 46 pphm at Stockton throughout 2019. The maximum hourly NH3 level was 20.3 pphm, recorded on 29 August 2019. The annual average ammonia was 1.2 pphm.

For more information on seasonal air quality at Stockton, refer to the Newcastle seasonal newsletters.

The dangerous fire weather conditions of the first half of the 2019-2020 bushfire season were preceded by prolonged and intensifying drought across NSW from 2017 to 2019. The bushfire risk was exacerbated by warmer than average temperatures, severe rainfall deficiencies, very low humidity and gusty winds, combined with very high dryness in fuel loads (refer to Climate section; Bureau of Meteorology Special Climate Statement 71).

Locations in the north-east recorded Forest Fire Danger Index (FFDI) values in the catastrophic category on 6 September, which marked the onset of numerous large bushfires. This was the highest FFDI for the north-east since records began in 1950. The FFDI was in the very high category for 21 days during spring 2019. The previous highest count was 11 such days in spring 2002 and an average count of 2 days (Bureau of Meteorology Special Climate Statement 72). Catastrophic fire weather led the NSW Government to declare a 7-day “State of Emergency” on 11 November and 19 December 2019.

The NSW Government records showed that around 4 million hectares were burnt in late 2019, and the extent of the bushfires was unprecedented in the NSW Government’s historical records.

Note regarding availability of data

Data availability in December was reduced at NSW air quality monitoring stations near bushfire grounds. The duration, extent and magnitude of the fires and smoke affected power supplies, filter loads on monitoring instruments and site access, disrupting automated data collection. Insufficient PM2.5 hourly data were available to calculate the daily averages between 1 and 4 days at Oakdale, Randwick, Bringelly and Bargo in Sydney, Orange and Bathurst in the Central Tablelands, Narrabri in the North-west Slopes and Armidale in the Northern Tablelands.

The NSW air quality monitoring network recorded more days above the PM2.5 national standard and with higher maximum levels from October to December 2019, than in any previous bushfire season (October to March) since 1998.

Between 20 October to 31 December 2019, there were 66 of 73 days where bushfire smoke contributed to daily PM2.5 levels above the standard, at 1 or more stations in the network. The daily PM2.5 standard was exceeded for 51 consecutive days between 11 November and 31 December.

Oakdale (in Sydney South-west) and Goulburn (in the Southern Tablelands; commissioned on 6 November 2019) recorded 11 days with daily PM2.5 levels above 100 µg/m3, 4 times the national standard of 25 µg/m3. Oakdale did not record data during 6 to 9 December, due to a planned power outage as the Green Wattle Creek bushfire burned through the suburb of Oakdale. Goulburn recorded daily PM2.5 levels over the standard on 24 consecutive days during 8 to 31 December. Goulburn recorded an hourly NO2 level of 16.1 pphm on 31 December due to bushfire smoke, which exceeds the hourly standard of 12 pphm and is highest on record since 1994 for the NSW monitoring network.

Bushfire smoke from late November and through December affected air quality at the Katoomba air quality monitoring station, which operates as part of the Blue Mountains and Lithgow Air Watch Project.

An extensive bushfire near Port Macquarie spread from a peat fire in a dry wetland, following a lightning strike in June 2019. In late July, an air quality monitoring station was established, monitoring PM10 and PM2.5 particles, visibility, and the gases ozone, nitrogen dioxide, sulfur dioxide and carbon monoxide. Monitoring results are summarised below.

In mid-November, due to the poor air quality observed in Port Macquarie and the extent of the northern NSW fires, emergency air quality monitoring stations were established at Coffs Harbour and Lismore. Monitoring results are summarised below.

Additional indicative monitoring was established on the NSW north coast at Grafton, Coffs Harbour and Taree in November and on the south coast at Ulladulla and Batemans Bay in December. Indicative monitors were installed to measure only hourly particle pollution levels. Data from these monitors have a lower level of accuracy compared to certified instrumentation. The hourly levels recorded by indicative monitors are not intended to be compared with the daily PM2.5 or PM10 benchmarks. Monitoring results are summarised below. 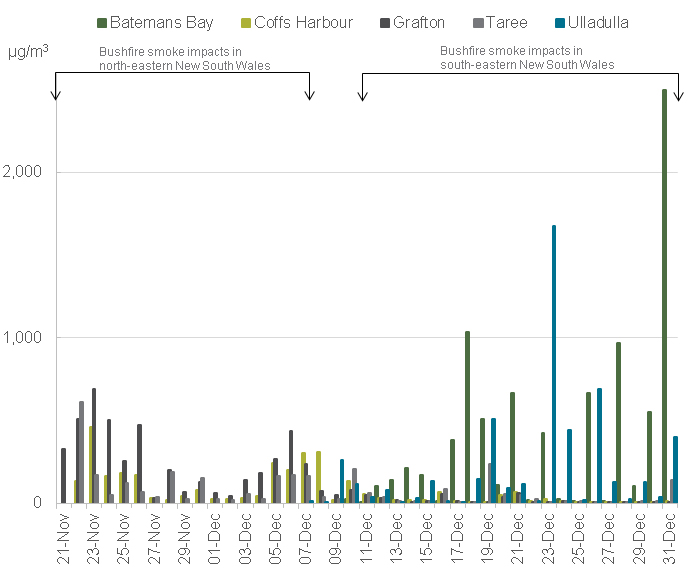 The NSW rural air quality monitoring network incorporates over 35 stations in rural NSW and across the border into South Australia and Victoria. These stations provide indicative monitoring of airborne particulate matters, as PM10 and PM2.5 (particles less than 10 and 2.5 micrometres in diameter, respectively) and total suspended particles (TSP). The indicative monitoring does not comply with any Australian Standards and PM10 and PM2.5 data recorded are not intended for comparison with national air quality standards for PM2.5 or PM10.

The NSW rural air quality monitoring network recorded elevated particle levels due to dust activities. For example, during the 2 largest dust storms in south-western NSW in 2019, the following occurred on 7 May and 21 November, respectively:

During the same event in November, high maximum particle levels were also observed in other western NSW stations such as Ivanhoe, Broken Hill and Lake Victoria.