Estuaries play a major role in the lifecycle of many freshwater and marine fish species.

Over 75% of commercial fish caught in Australia are estimated to spend part of their life cycle in estuaries and inshore wetlands. 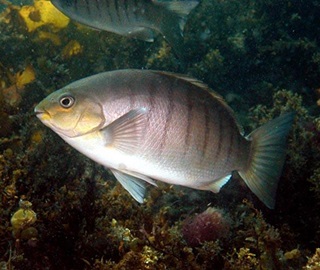 Port Jackson sharks, bull sharks, whalers and wobbegongs occupy estuaries intermittently for breeding. Large sharks such as tiger sharks and white sharks have been recorded in some of our larger estuaries.

Fish are useful indicators of environmental change. Changes to the size of fish populations, the presence or absence of key species and disease can indicate the health and integrity of estuarine environments. Fish assemblages respond to water quality, habitat health and the overall productivity within an ecosystem.

Fish populations also vary based on estuary entrances. Estuaries with a naturally occurring permanent opening to the ocean will contain different species that may not be present in intermittently closed systems. Fish populations have adapted over time to the conditions of the estuary they live in.

The NSW Department of Primary Industries (DPI) is responsible for monitoring, managing and protecting fish under the Fisheries Management Act 1994 and the Fisheries Management (General) Regulation 2010. The responsibility for threatened species and their management is shared between DPI and Department of Planning and Environment – Environment, Energy and Science under the Biodiversity Conservation Act 2016.

The diversity and abundance of fish in estuaries is strongly influenced by available habitat. The loss of seagrasses and mangroves can significantly impact the recruitment and survival of estuarine fish species.

Fish populations are under pressure from: