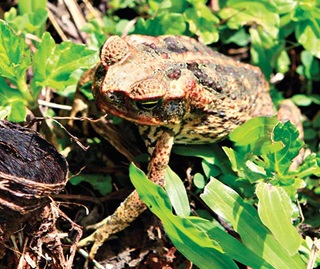 Since colonisation, many species of animal have been introduced into Australia from other countries. They include cane toads, goats, foxes, deer, rabbits, pigs, cats, dogs and horses.

Introduced herbivores, such as deer, goats and pigs, can cause extensive damage to native vegetation and soils through grazing, trampling and digging. They may also compete with native herbivores for food and further impact the environment by providing an abundant food source for other pests. For example, rabbits can support high densities of feral cats and foxes, which in turn prey on native animals.

Some species of pest animals have been listed as key threatening processes under the Biodiversity Conservation Act 2016.

As well as damaging the natural environment, pest animals can harm sites of cultural significance such as Aboriginal rock art sites or historically significant structures.

Pest animals pose a major threat to agriculture by killing, harassing or competing with livestock, spreading disease and contributing to soil erosion. They can affect aquatic as well as terrestrial ecosystems.

The NSW Saving our Species (SOS) program provides priorities for the protection of threatened species from pests and weeds (and other threats) across New South Wales.