WildCount was established in response to a State of the catchments 2010: Native fauna report, which identified data gaps for a range of vertebrate species in New South Wales. We did not have enough information to assess broadscale trends in even our most common species.

To address this issue, WildCount examines trends in the occurrence of animals at these 200 sites. The program is one of the first in the world to monitor a broad suite of animals at such a large scale.

The data generated can identify changes in occupancy to understand if animals are in decline, increasing or stable and, ultimately, to guide on-ground management.

The videos below have more information about the program.

The 200 WildCount camera sites are located in 146 national parks and reserves spread across eastern New South Wales. Four motion-sensing cameras are placed annually at each Wildcount site, between February and June, by 6 teams. Cameras are left in the field for a minimum of 2 weeks and capture over 250,000 images each year. 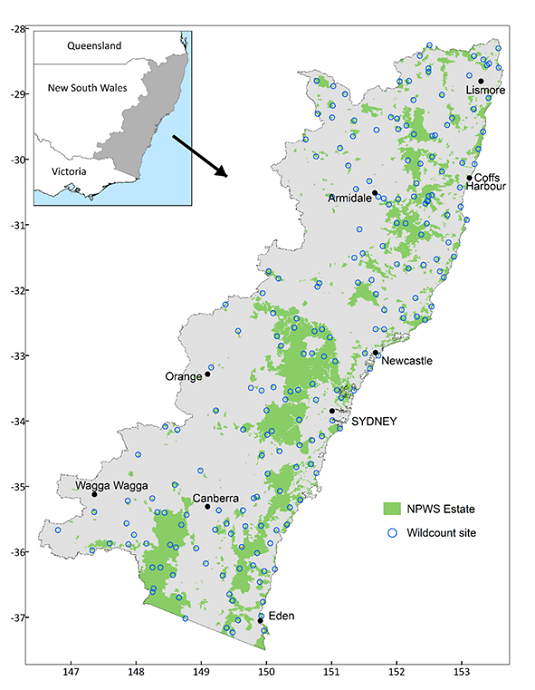 What we do with all the photos

A small team of researchers process and review  every image we capture each year, identifying the species encountered at each WildCount site to compile species lists. These lists are distributed to local National Parks and Wildlife Servics (NPWS) area staff annually.

Expert ecologists analyse the cumulative dataset to determine species occupancy, i.e. the modelled annual changes in the proportion of sites each species is recorded at. The findings from the first 5 years of WildCount (2012 to 2016) have recently been published in a mid-term report.

Using the first 5 years of data, WildCount ecologists have:

Overall, this demonstrates how important broadscale, long-term monitoring programs are to collecting data about wildlife, in order to make scientifically valid statements about changes over time.

More years of data and the inclusion of co-variate data (e.g. habitat and weather) in the analyses will likely see an increase in the number of species we can reliably monitor. Further analyses will be conducted and reported on following the tenth survey in 2021.

Table 1 Animals that can be reliably monitored for changes in occupancy over WildCount’s 10-year period, and their preliminary analysis of likely trends

Note: This list is based on analysis of species detections across sites in the first 5 years of surveys (2012 to 2016).

WildCount’s primary aim is to detect a 30% change in target wildlife populations significant enough to trigger listing on the IUCN (International Union for Conservation of Nature) Red List of species vulnerable to extinction. This information can then be used to inform and guide future management decisions within our parks and reserves.

Datasets from long-term monitoring programs such as WildCount also have substantial value for detecting relationships between changes in animal populations and the impacts of either climate patterns, seasonal weather or environmental events. For example, WildCount provides an extensive historical pre-fire dataset from 200 sites. Given the devastating 2019–20 fire season, in which nearly 70 sites were burnt, the information that WildCount captures in 2020 and beyond will be highly relevant for learning about the impacts of bushfires on our native animals and how wildlife recovers.

WildCount’s non-targeted, broadscale monitoring methods have also led to some exciting and useful species detections, including new records of threatened species, and enabled tracking of pest species incursion into new areas of parks and reserves. These findings have been used to guide management decisions and enhance programs, most significantly the:

More generally, the records of the animals captured in WildCount images are submitted to the NSW BioNet, so that landscape managers, researchers and the general public have access to the data. As of July 2020, 35% of the publicly available mammal records on BioNet are from WildCount. This is evidence of the program’s contribution to addressing the data gaps found in 2010.

Data from the WildCount program is also available to other researchers, and collaborations with the Environment, Energy and Science group within the Department of Planning and Environment (the Department) and various universities are underway.

Since 2014 Wildcount has been heavily reliant on the dedication and support of volunteers to complete each field season. The program is structured with 6 field teams (one NPWS officer, and a volunteer) operating across the State from February to late May. Typically volunteers dedicate 1 full week to the program.

Meet NPWS volunteer Vicky as she recounts her experiences during the 2018 WildCount season.

*Prior to COVID-19 enforced shut-down

Regrettably, due to COVID-19, the volunteer program has been put on hold at this point, so there will be no recruitment or advertising for the foreseeable future.

NPWS has a wealth of other amazing opportunities for volunteering. You can find more programs and register on the NPWS’ Volunteer Portal (VIP).

Over 1 million animal images have been captured as part of the Wildcount program.

This report summarises the first 5 years of data collection and analysis from the monitoring of animals, from 2012–2016. It addresses a number of key factors arising from the study so far.