Sea turtles, frogs and other aquatic animals live in our estuaries and use them for food, rest and shelter.

A number of aquatic vertebrate species other than fish rely on New South Wales estuaries. For example: 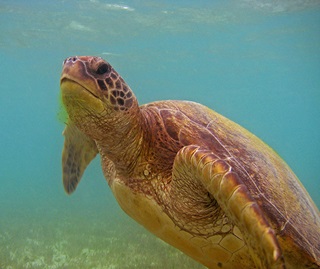 As well as these residential species, other more occasional visitors use New South Wales estuaries to feed and shelter.

These include sea turtles such as loggerhead and leatherback turtles. Sea turtles are more likely to visit estuaries to graze on seagrass or rest, and are being found further south along the east coast of Australia because of increasing temperatures of water and sand. Sea turtle nesting events are becoming more frequent in northern NSW, and sea turtles have been sighted as far south as Jervis Bay.

Bottlenose dolphins are commonly seen in estuaries and breeding populations are known at Port Stephens, Jervis Bay and Twofold Bay.

If you’re lucky, you may even spot whales. Humpback and southern right whales visit estuaries such as Jervis Bay, Sydney Harbour and Botany Bay for short periods on their annual migrations up and down the coast.

Amphibians are particularly susceptible to chemical pollution and chytrid fungal infection as well as predation by domestic and feral cats and foxes.

The main estuarine threats to the larger marine mammals and sea turtles include boat strikes and entanglement in mooring lines and fishing gear.