Daily average PM10 levels met the national standard in metropolitans and regional centres on 76% of days in 2020, compared with 52% of days in 2019.

During 2020, annual average PM10 levels remained below the national standard at all 41 monitoring stations in NSW metropolitan and regional centres, where annual average data were available, except for Stockton at the Port of Newcastle (refer to the figure below: Summary of PM10 observations in NSW in 2020).

PM10 particle levels were far lower throughout the state in 2020 compared to the previous two years, as drought conditions weakened and bushfire impacts moderated following significant rainfall events from February 2020.

Historically, annual average PM10 levels generally are higher in the Upper Hunter and the Port of Newcastle (due to local industrial activities) than elsewhere in the State. Wagga Wagga North, in the South-west Slopes, is another station which typically records higher PM10 annual averages, particularly during drought conditions due to windblown dust. More information about particle levels in the Hunter regions can be found in Focus areas – on the Hunter Valley and Stockton tabs.

All air quality monitoring stations in metropolitan and regional population centres recorded days with PM10 levels exceeding the national standard in 2020, except Penrith and Morisset (where PM10 data came online on 1 July 2020 and 26 November 2020, respectively).

Around half the days with daily PM10 levels exceeding the standard (46 days, 53%) occurred in January and February, associated with the intense drought conditions across NSW and the more frequent widespread dust storms and extensive smoke that accompanied the extreme 2019–20 bushfire season.

The maximum daily PM10 level recorded across stations in metropolitan and regional population centres was 556.7 µg/m3, at Goulburn in the Southern Tablelands on 1 January 2020, due to bushfire smoke. On the previous day, Goulburn recorded 494.1 µg/m3, the maximum daily PM10 average for the State in 2019, due to a combination of bushfire smoke and a widespread dust storm.

Merriwa, a background air quality monitoring station in the Upper Hunter region, recorded the highest maximum daily PM10 level across the network in 2020, with 620.7 µg/m3 on 11 January 2020, during a widespread dust storm. This was the fourth highest PM10 pollution day since 1994 and the highest since 2009. 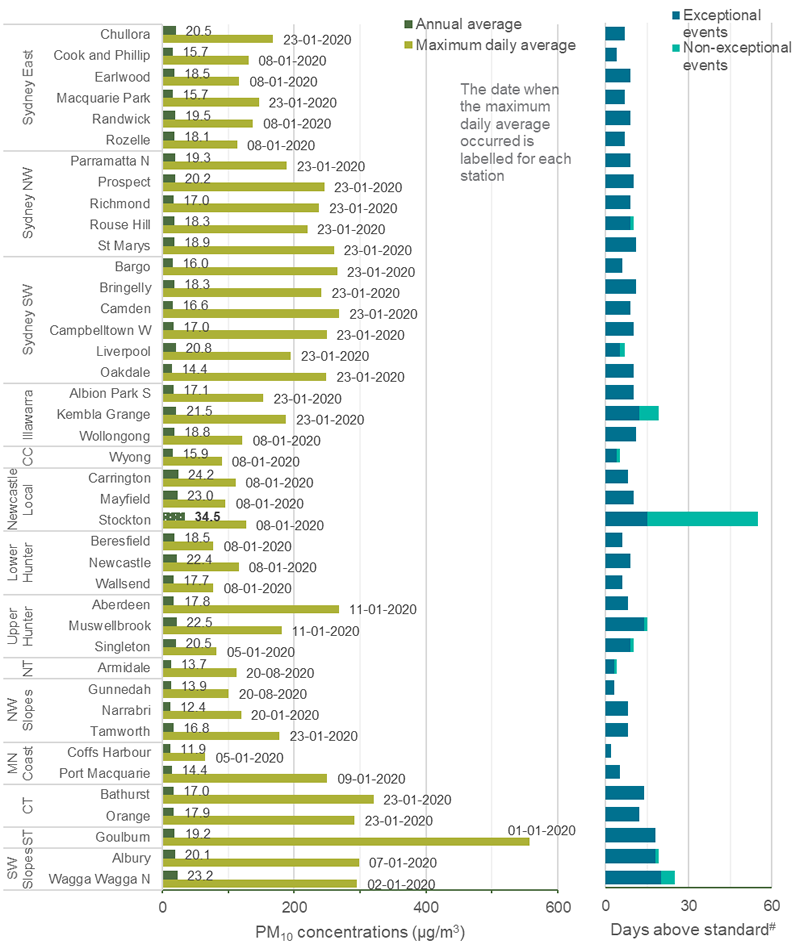 # Days exceeding standard are divided into exceptional and non-exceptional events. Exceptional events are those related to bushfires, hazard reduction burns and continental-scale dust storms. These are not counted towards the NEPM goal of ‘no days above [i.e. exceeding] the particle standards in a year’.

New stations at Penrith and Morisset, coming online on 1 July 2020 and 26 November 2020, respectively. are not included in this graph. There were no days exceeding the daily PM10 standard at these stations since commissioning.