Orange hawkweed is an invasive daisy that is found in Kosciuszko National Park. Detector dogs help us find and control this weed in the sensitive alpine environment.

What is orange hawkweed?

Orange hawkweed (Hieracium aurantiacum) is a perennial herb native to Europe. It is a member of the daisy family (Asteraceae) and has bright orange flowers with square-edged petals, making flowering plants easy to identify.

The plants lie close to the ground and leaves grow outwards from the centre, in a flat circular pattern, forming a rosette. The weed can spread via seeds or stolons, which are horizontal plant stems or runners that lie across the ground and grow from buds in the rosette.

Why is orange hawkweed a problem?

Orange hawkweed is a problem because it

Orange hawkweed is listed as Prohibited Matter under the NSW Biosecurity Act 2015. Hawkweeds (Hieracium species) have potential to be serious environmental and agricultural threats in the temperate areas of south east Australia, including the Australian Alps. Prompt treatment of known populations of hawkweeds has limited their spread so far.

Orange hawkweed is on the Alert List for Environmental Weeds, a list of 28 non-native plants that threaten biodiversity and cause other environmental damage. Although only in the early stages of establishment, these weeds have the potential to seriously degrade Australia's ecosystems.

Orange hawkweed was historically sold in nurseries as an ornamental plant in New South Wales. It was first recorded as naturalised in 2003. Loss and degradation of native plant and animal habitat by invasion of escaped garden plants, including aquatic plants has been listed as a key threatening process by the NSW Scientific Committee.

NSW Orange Hawkweed Strategy has been developed in consultation with a range of stakeholders to address the threats from hawkweed and aims to eradicate orange hawkweed and mouse ear hawkweed from New South Wales.

View our Flickr gallery for images of the Hawkweed Eradication Program in Kosciuszko National Park.

Detector dogs can help find even the smallest fragment of a target plant. ‘Botanist puppies’, who are officially known as Weed Eradication Detector Dogs (WEDDs), may allow us to sniff out those very last weeds and eradicate high-risk weeds, such as orange hawkweed, from NSW. Detector dogs are also used to help find mouse-ear hawkweed.

The video shows Hillary Cherry, NPWS Weed Management Officer, under the guidance of Steve Austin (Canine Training and Behaviour Specialist) learning to train Sally the detector dog to find hawkweed. The video captures one of the first instances in which Sally successfully indicated hawkweed. 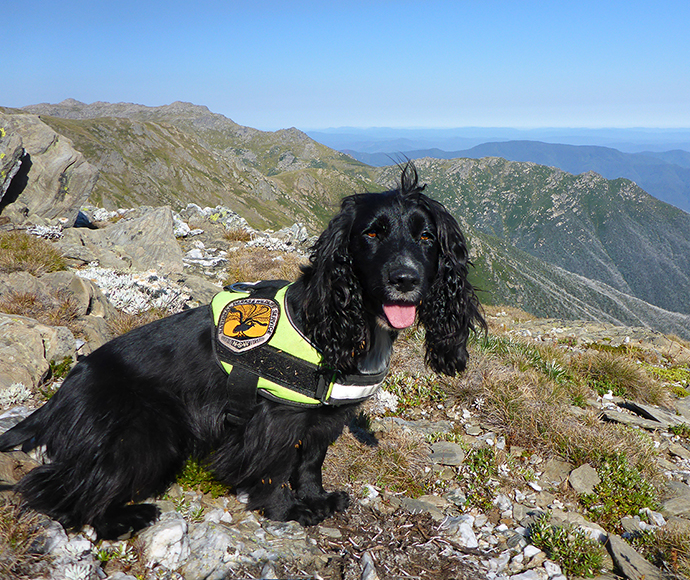 Drones or Remotely Piloted Aircraft Systems (RPAS) are helping detect orange hawkweed from the air. Drones capture colour imagery and a specially designed algorithm automates the detection process, identifying pixels in the images that correspond to the colour of the distinctive orange-red flowers. Drones have detected single plants and larger infestations, and surveyed many hundreds of hectares where orange hawkweed had not been previously detected.

A challenge in any weed eradication is finding the plant. Drones allow large areas to be surveyed at low cost and are being used in combination with helicopters to drop the drone team into remote areas that are difficult to reach by foot. This technology will assist in containing the infestation and thus reaching eradication.

NPWS is also exploring the use of hyper- and multi-spectral imagery to detect orange and mouse-ear hawkweeds. Such imagery can be captured using drones or via satellites.

Join the hunt for orange hawkweed and help eradicate this noxious weed from the Jagungal Wilderness Area in Kosciuszko National Park. You can volunteer to help protect sensitive environments like alpine bogs from hawkweed invasion by helping NPWS staff find orange hawkweed.

The volunteer program runs for 4-6 weeks each summer.

Find out more about volunteering with the National Parks and Wildlife Service.

The eradication program is taking steps to eliminate this weed, which is listed as Prohibited Matter under the NSW Biosecurity Act 2015.

‘Hunting Hawkweed’ is a volunteer program supporting the eradication of a noxious weed.