In 2020, New South Wales experienced extreme heat and bushfire conditions in January, significant rainfall across much of the state in February, and a warmer, wetter year on average.

Drought conditions eased throughout the year, ending with 3% of the state drought-declared in December compared to 100% in January. This resulted in much improved air quality across the state, compared with 2019.

The Bureau of Meteorology reported above average rainfall and temperatures in 2020 across New South Wales. The state’s annual mean temperature in 2020 was 0.91°C above average, the coolest year since 2012. Rainfall was 14% above average in 2020, resulting in drought recovery across much of the State. NSW recorded increased rainfall in 2020, almost as much as in 2018 and 2019 combined.

Summer 2019–20 was warmer and drier than average, with widespread bushfires, heatwaves and dust storms in December and January. Significant rain fell in February along the coast. December 2019 was the hottest and second driest on record, with mean temperatures 3.32°C above average and rainfall 85% below average. The state experienced several heatwave events, with 48.9°C recorded in Penrith on 4 January. This was the hottest temperature on record in the Sydney Basin and the hottest temperature recorded in the state in 2020. The hot, dry conditions across the state contributed to the worst bushfire season on record, which burned 5,520,000 hectares in eastern NSW (DPE Air quality special statement spring-summer 2019-20). A series of low-pressure troughs in early February brought heavy rainfall, with totals very much above average along the coast. Observatory Hill in Sydney recorded 391.6 mm from 7 to 10 February 2020, Sydney’s wettest four-day period since February 1990. Some coastal areas recorded their wettest summer on record, while the far west recorded little to no rainfall. Rainfall was 10% below average across NSW for summer 2019–20.

Autumn 2020 was the first season with below average mean temperatures in NSW since spring 2016. The autumn mean temperature of 0.35°C below average was the coolest since 2012. Autumn 2020 was the wettest autumn since 2012. Rainfall was above to very much above average away from the coast. Northern and southern coastal areas were 40-60% drier than average during autumn.

Winter 2020 was the wettest winter since 2016 with seasonal rainfall 5% above average. A series of complex low-pressure systems from mid-July brought heavy rain and flooding to parts of the coast, continuing through winter. Mean winter temperatures were 0.58°C above average, with warm temperatures in June and July, though cooler than recent winters. August was the coolest August in the State since 2010.

Spring 2020 was the fifth warmest spring on record, with mean temperatures 2.23°C above average. Severe to extreme heatwave conditions in November affected west and northeast parts of the state, extending to Sydney in late November. Observatory Hill in Sydney recorded maximum temperatures of 40.8°C and 40.5°C on 28 and 29 November. This was the second time since 1859 that the station recorded consecutive days with maximum temperatures above 40°C. Rainfall was 5% below average, with temporal and spatial variability. Rainfall was above average in some coastal regions, below average in the north-east and above average in the far west. 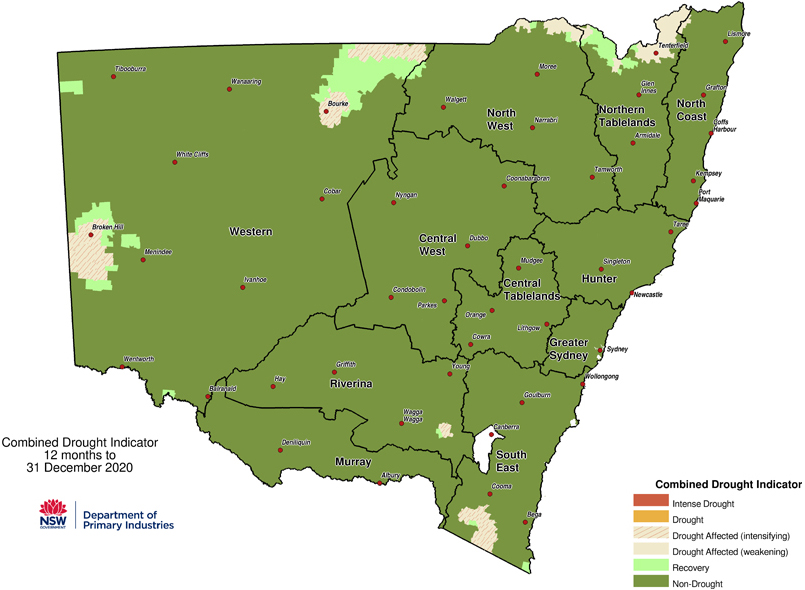