The New England Tableland bioregion is in northern NSW and is a stepped plateau of hills and plains. It is one of the smaller bioregions in NSW. 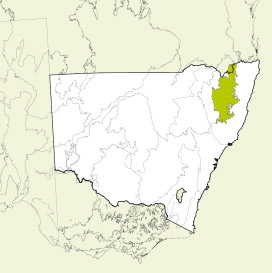 In NSW, the bioregional boundary extends from north of Tenterfield to south of Walcha.

The climate is mainly temperate to cool temperate, with montane climate at higher elevations. The north-eastern boundary has a warmer, sub-humid climate.

Open forests and woodlands, with a variety of species depending on soil type, are the main vegetation. There are several threatened animal and plant species including the endangered regent honeyeater (Anthochaera phrygia).

There are several national parks and nature reserves, with some private land conservation arrangements. The Ramsar-listed Little Llangothlin Nature Reserve wetland is in this bioregion.

The bioregion lies between the North Coast and Nandewar bioregions in northeast NSW, extending north just into Queensland.

Parks, reserves and conservation areas include...