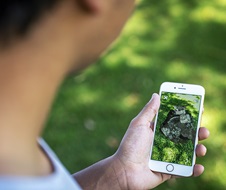 "It's exciting to launch our first augmented reality experience with this rare seabird's story, set on Broughton Island, near Port Stephens in NSW," Mr Hutchings said.

"This conservation work has been incredibly successful, with Gould's petrels returning to breed on Broughton Island. In 2019 the first egg was laid, with the very first chick hatching in 2020," Ms Callaghan said.

Since then, 5 more chicks have hatched over 2 consecutive seasons.

Given that Broughton Island is only accessible by boat, seeing a chick or adult petrel in the flesh is unlikely for most of us.

"But now everyone can learn about petrels and the NSW Government's efforts to protect this special species through augmented reality, as part of NPWS's Digital and Safety program," she said.

Gould's petrels visit far-off places in New Caledonia or New Zealand and breed on islands such as those off Port Stephens.

In 2021, Broughton Island and other nearby islands were listed as Assets of Intergenerational Significance because of their importance as Gould's petrel breeding sites.

Visitors to Tomaree Headland can walk to the summit and use the lookout's new sign with QR code – or they can watch the AR story on the app from the comfort of home.

The AR experience shows a 3D-rendered bird moving and flying between scenes with animations on-screen as the story unfolds with narration.