Spring is here so watch your step because beach-nesting birds have started setting up home on Port Stephens' sandy shores. 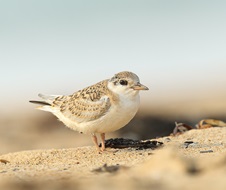 "Pied oystercatchers are a distinctive shorebird and regularly seen, so it may come as a surprise to learn that there are only about 140 breeding pairs in New South Wales."

"We need to share the shorelines with them, bearing in mind their eggs and chicks camouflage so well against the sand they are almost invisible and easy to step on or crush."

"The whole community can help protect shorebirds by keeping out of nesting areas marked by signs or fences, only taking your dog to designated dog beaches and keep them on leash over summer," she said.

"Chicks are highly camouflaged and don't necessarily stay within marked nesting areas, so reduce your risk of accidentally stepping on a chick by walking on the wet sand."

Known nest sites may be indicated by fencing or signs, while parts of some beaches such as those on Corrie Island will be entirely closed to visitors during the breeding months from August to March, to allow these birds space and peace to raise their families.

Pied oystercatchers with their black-and-white feathers, pink legs and red beaks are easily identified. Almost always seen in pairs, they live in Australia year-round and have already started laying eggs.

Meanwhile, endangered little terns fly thousands of kilometres from eastern Asia before nesting up and down the coast around places like Port Stephens.

Visitors are reminded that dogs are not allowed on NPWS national parks, including Corrie Island Nature Reserve, at any time.

People are reminded penalties can apply to individuals causing disturbance or damage to threatened species, including their eggs or chicks.

Protection and monitoring of beach-nesting birds in Port Stephens is delivered by the NSW Government's Saving our Species program, MidCoast Council, NPWS, Biodiversity Conservation Division and the Myall Koala and Environment Group, and is supported by Hunter Local Land Services through funding from the Australian Government's National Landcare Program.