The Willandra Lakes Region in south-western NSW has been inhabited by Aboriginal people for at least 50,000 years. It contains what is probably the world’s oldest known cremation site. 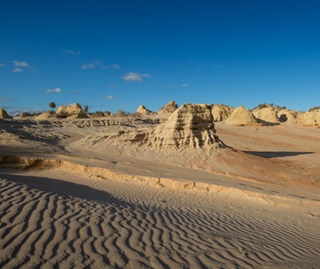 This World Heritage-listed property is a semi-arid region of 2400 square kilometres. It includes several dried lake beds amongst a landscape of bluebush/saltbush, mallee trees, cyprus pine and grasses. Fifty thousand years ago the lakes contained fresh water. They started drying up about 19,000 years ago.

Aboriginal people have lived in the Willandra Lakes Region for at least 50,000 years. Three Aboriginal communities are the traditional owners of this land – the Barkandji/Paakantyi, Mutthi Mutthi and Ngiyampaa people.

The region is an ancient landscape and supports an ancient culture that continues to exist today. For example:

The region also has some striking geological formations, such as the eroded dune system called the Walls of China. 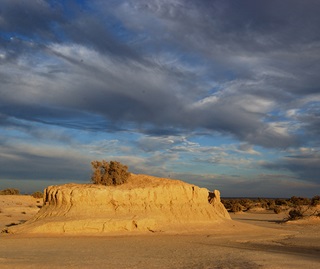 The Willandra Lakes Region was added to the World Heritage List in 1981. The boundary of the original listing was modified in 1995 to better define the area containing World Heritage values.

The Australian Government, as signatory to the World Heritage Convention, works with state agencies through the Department of Environment and Energy to manage World Heritage-listed areas.

Representatives of New South Wales and Australian Government agencies participate in an intergovernmental management committee. This committee maintains communication between relevant agencies and governments and determines policy directions for this World Heritage area.

An advisory committee, an Aboriginal advisory group and a landholders group help us manage this region.