The Central Coast is pitching in to protect a rare nest of endangered loggerhead turtle eggs discovered at Shelly Beach at dawn last week. 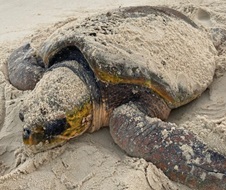 Council’s Director Environment and Planning, Alice Howe, said Council has built a temporary fence around 15 m2 of the sand dune to protect the site and is calling on the community to help as well.

“It’s exciting and extremely rare to have a loggerhead nest in the dunes here, which is why it’s important people remain outside the fenced area and obey the signs to help keep them safe,” Dr Howe said.

“The mother has buried the nest a short distance below the sand surface, in an area popular with beachgoers. People could inadvertently crush eggs or collapse the nest simply by walking over the top.

“Predators also pose a risk – such as foxes or dogs digging up the eggs, as well as goannas and birds, all of which are potential egg thieves and nest raiders.”

“This southern shift in nesting could be attributed to warmer water temperatures being experienced further south on the east coast of Australia in recent years,” Mr March said.

“So to have a nest in a cooler climate that will produce predominantly male hatchlings is important for this species’ long-term viability.”

“Creating community awareness is key to ensuring the eggs are protected from harm and have the best chance to hatch, so the nest will be monitored closely by staff and volunteers.

“A big thanks to beachgoers for understanding the need for the temporary exclusion fencing, which will be removed as soon as the eggs have hatched.”

Experts from the 3 organisations anticipate the nest has between 100 to 150 turtle eggs which, depending on sand temperatures, could hatch in around 8 to 12 weeks’ time.

Sea turtle nesting activity can be reported to NSW TurtleWatch on 0468 489 259 or find out more by emailing turtlewatchnsw@gmail.com.