Large scale interventions are underway to save 3 of the state's important Brush-tailed Rock-wallaby populations. 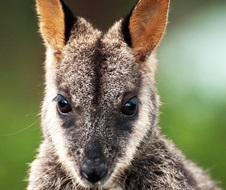 The Head of the National Parks and Wildlife Service (NPWS), Atticus Fleming AM, said the most westerly population of the brush-tailed rock-wallaby, in Warrumbungle National Park, has declined to 12 known animals.

"The long-term impact of foxes and goats combined with fire has driven the decline," Mr Fleming said.

"This population is special because it is adapted to living in hotter, drier climates. It is crucial we retain that genetic material to help the species adapt to climate change.

"To secure the Warrumbungle rock-wallabies, NPWS is establishing a large 303-hectare feral predator-free area within the park.

"Work on the fence will start shortly, with the area likely to be free of foxes and feral cats within a few months, and ready for the relocation of rock-wallabies.

"Once in this secure environment, we expect the rock-wallabies will increase quickly. With genetic supplementation, we can re-establish a healthy Warrumbungle population," Mr Fleming said.

At the nearby Mount Kaputar National Park, the rock-wallaby population may have declined to just one individual. That animal will be translocated into the Warrumbungle feral-free area as soon as possible. A population will be returned to Mount Kaputar when advances in fox control can ensure their survival.

At Nattai National Park, the rock wallaby population had declined to 3 individuals. The Nattai population is identified in the National Recovery Plan as an important population which must be retained because its loss would create a large range gap.

"With the support of Aboriginal owners and park neighbours, a 92-ha feral predator free area is under construction in Nattai National Park, with a stage 1 area (0.3 ha) already complete. Two individuals are now in this secure area and have had their first baby," Mr Fleming said.

"Supplementation with additional animals will allow us to rebuild the Nattai population.

"Feral cats and foxes kill over 2 billion native animals every year across Australia. We know that feral predator-free areas work to prevent extinctions and restore populations and, importantly, they are a cost-effective strategy over a 20–30 year period," Mr Fleming said.

The feral free areas in the Warrumbungle and Nattai national parks will also support the return of other threatened species that have become locally extinct as a result of feral cats and foxes.

NPWS is undertaking the largest feral animal control program in its history, involving ground and aerial baiting, trapping and shooting. The level of aerial shooting has more than doubled, and the level of baiting has increased five-fold, compared to the average levels in the last decade.