The Australian brush turkey belongs to the family of birds known as megapodes because of their large feet. They construct large mounds of rotting vegetation to incubate their eggs. 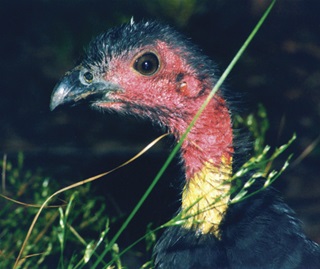 The brush turkey is easily recognised by its:

The bird's wattle (a fleshy lobe hanging down from the base of its neck) varies in colour with its age, gender and location. In the southern parts of its range, the male brush turkey has a bright yellow wattle, while on Cape York Peninsula in far north Queensland its wattle is light blue. Females and younger birds have dull yellow wattles.

Brush turkey chicks look much like quails, with plain rich brown feathers over their entire bodies. As they mature they lose the feathers on their heads and necks, where the bare skin turns a deep pink colour.

The Australian brush turkey, while generally a quiet bird, will sometimes be heard making soft grunts. Males have a deep three-noted booming call. 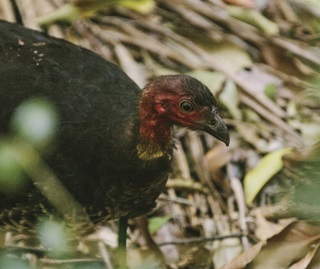 The Australian brush turkey can be found in NSW and Queensland. It lives in humid forests along the eastern seaboard and inland to the wetter ranges, though it is most often seen in rainforest and neighbouring eucalypt forest areas. It remains in a particular locality throughout the year, where it breeds and forages in the forest leaf litter for fruits, seeds and small animals.

During the Great Depression in the 1930s, when jobs and food were scarce, Australian brush turkeys (brush turkeys) were nearly wiped out when people used them for meat and eggs. Today, this native wildlife is protected under the Biodiversity Conservation Act 2016 and the population of brush turkeys is now recovering in areas where they have not been seen for many decades.

Mound builders like lyrebirds and brush turkeys are territorial, and in the large area where they rake and shift leaf litter, looking for insects and worms, they are also breaking up the dry leaves and twigs and pushing them into the soil. This reduces the fuel available for hot ground fires and can create a refuge for small animals during wildfires. 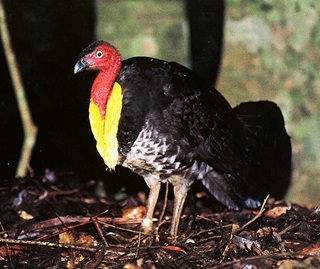 Male brush turkeys rake up huge leafy mounds to entice females to lay their eggs deep inside the pile between August to February each year. They usually lay one egg every 2 to 5 days. The females do not stay around the mound once they have laid.

The male maintains the mound temperature to around 34 degrees Celsius by shifting around the composting material to incubate the eggs for 50 days. The mulch may hold around 20 eggs.

Chicks take 48 hours to dig themselves out to an independent life. They receive no further parental care. Unfortunately, they are very vulnerable to attack. On average, only one chick in every 200 eggs laid survives. 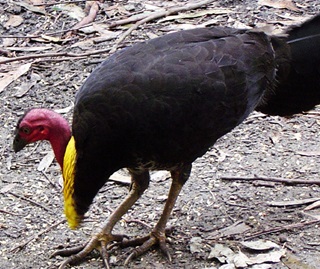 Manage brush turkeys in your garden

Brush turkeys are generally wary of humans. However, they can become very tame around picnic grounds and homes, particularly if they are fed. We don't recommend that you feed brush turkeys.

Brush turkeys can be destructive in gardens as they remove vegetation, earth and mulch to create incubation mounds.

How can you stop mound building?

Once a male brush turkey has started to build its mound it is extremely difficult to stop it. If a mound has been established for several weeks and the male is maintaining it, you should wait 60 days to allow eggs to hatch and young to emerge before dispersing it. To deter nesting in your garden in the future, use a combination of the following:

If after trying several strategies a brush turkey is causing safety concerns, then contact your local National Parks and Wildlife Service Area office for advice.