Bowerbirds are very closely related to birds of paradise, and species of bowerbird are found in many parts of Australia and New Guinea. 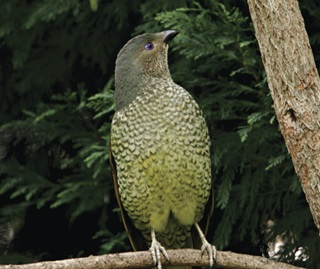 They are mainly forest birds, living in a particular local area throughout their lives.

Male bowerbirds weave intricate display areas (or bowers) out of twigs. They decorate their bowers with charcoal, saliva and colourful objects. Because of this, bowerbirds are often thought of as the most advanced of all birds.

A bower is not a nest. It is an attractive 'avenue', used by male bowerbirds to entice a female. When they are not feeding, the males spend much of their time perched in the bower, calling to potential mates and warning off potential rivals. 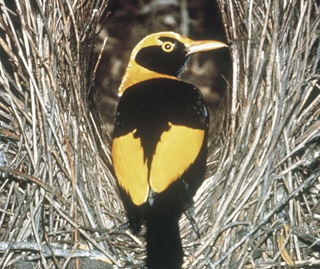 The head, back and flight feathers of the male regent bowerbird are coloured in a rich golden-yellow, with the remainder of the bird being black with a purple sheen. Its forehead is sometimes tinted crimson, and it has bright yellow eyes.

The male moults into this plumage when he is 4 years old - until then, he resembles a female. The female is coloured in shades of dull brown, olive-brown, and yellow-brown on the upper parts of her body, and pale buff with brown mottling underneath.

The male's bower is a single avenue, usually hidden in a tangle of ferns and vines on the forest floor. He paints it yellow, using a mixture of saliva and the juice of crushed leaves. The avenue is decorated with snail shells, berries, pebbles and leaves, all of a red-black or yellow-brown colour. Although each bower is constructed and maintained by a dominant male, other males may visit and care for it.

Regent bowerbirds are fruit eaters and live mainly in the upper levels of forest trees. They spend time on the ground only when bower-building, displaying and mating. Their range extends from the Eungella Range, inland from Mackay in Queensland, to the Illawarra escarpment near Wollongong.

When courting, the male regent bowerbird fans his tail and spreads his wings. He sometimes beats his wings to display their brilliant colours while churring, chattering and wheezing. 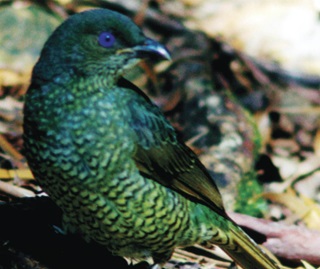 The female is slightly smaller, and is coloured green, grey-green, dusky brown and dark brown. Her underbody is buff to cream, marked with dark olive-grey to dusky grey crescents.

The male's bower is an avenue of twigs and sticks, which he weaves into walls running in a north-south direction. He usually paints these walls with a mixture of charcoal and saliva.

Platforms at both ends of the avenue are decorated with mainly blue-coloured objects - including flowers, feathers, and berries. When there are humans nearby, the birds will also use plastic items such as clothes pegs.

What sort of environments do they live in?

The satin bowerbird lives in rainforests and the edges of drier forests on the coast and adjacent ranges of eastern Australia. It is found from Cooktown in Queensland to near Melbourne, in Victoria.

During autumn and winter, satin bowerbirds leave their forest habitat and move into open woodlands to forage for fruit, leaves and insects. However, with the arrival of the spring breeding season they collect together in small groups, inhabiting territories which they apparently occupy year after year. Each mature male bird protects and tends his own bower throughout the year.

When courting, the male satin bowerbird prances and struts around his bower. He offers the female items from his collection of blue objects, while making a series of hissing, chattering and scolding noises. Mating takes place in the avenue of the bower, and the male may mate with several females in a single season.

Only the female builds a nest. This is a shallow, saucer-shaped construction of twigs and dry leaves, placed 10–15m above the ground in the upright outer branches of a tree. The nest is lined with fine dry leaves. The female lays 1 to 3 eggs, which she incubates. She then raises the young on her own. 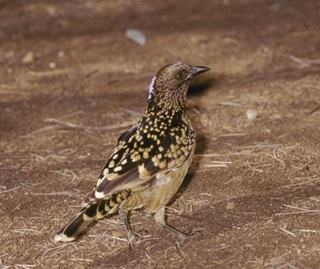 Both male and female spotted bowerbirds have a mottled brown appearance, with a bar of lilac on the back of their necks. The mottled plumage ranges from fawn-brown with dark spots on the neck, to dusky-brown or black with buff spots on the back and wings.

This intricate structure consists of twin parallel walls of finely interwoven dry stems, set in a foundation-mat of crossed sticks. It is located on the ground under shrubs, facing a north-south direction.

With his beak, the male dabs a red-brown mixture of saliva and grass juice on the inner walls. At each end of the bower, up to a metre of ground is cleared and decorated with neat piles of white and pale green objects. Bones, pebbles, snail shells, seeds, berries and even pieces of glass are used.

In NSW, spotted bowerbirds are found in grassed woodlands on the western slopes and plains. They often live around homesteads, making their bowers in residents' gardens.

During breeding and through the rest of the year, the male spends time tending, watching and 'singing' over his bower. Males mate with several females during the breeding season, and the females nest and rear the young on their own. 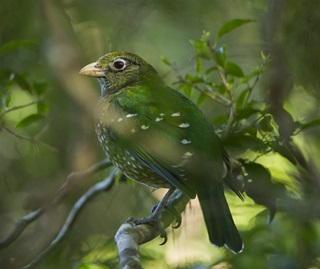 The green catbird, another member of the bowerbird family, gets its name from its cat-like wailing call. Males and females are various shades of green, flecked with black on the head and face; and white on the nape, neck and wing tips. Their eyes are red.

In NSW, green catbirds live in the tropical and subtropical rainforests and adjacent tall forests along the east coast and adjacent ranges. They can be found as far south as the Illawarra region. Green catbirds are mainly fruit eaters, but they will also eat insects and their larvae. Occasionally they will extend their diet to leaves, shoots and flower heads, frogs, and baby birds.

Green catbirds do not build bowers, although they may clear an area and lay leaves down in it. It is thought that the birds pair for life. Courtship is simple, with the male chasing the female from branch to branch, making clicking and rasping sounds. When not chasing, the male preens himself, feeds, and wails. Often, he holds coloured leaves or fruit in his beak while displaying. Only the female green catbird builds the nest and incubates the eggs, although both sexes feed the young. They defend the nest by feigning injury, dropping to the forest floor and fluttering around to pretend they have broken wings.