Brush-tailed possums are the most abundant, widely distributed and frequently encountered of all Australian marsupials. 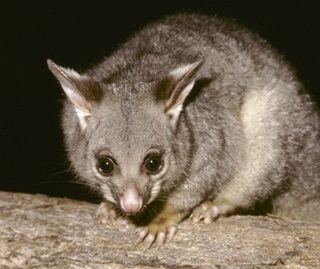 Brush-tailed possums are about as big as domestic cats, and have a pointed snout, pink nose, long whiskers and large ears. They also have sharp claws, which they use to climb trees and comb their fur.

Brush-tailed possums vary considerably in size and colour. In Tasmania, they tend to be black or grey, and have adapted to the cold climate by becoming much larger and furrier than brush-tailed possums on the mainland. In Queensland, however, the animals are more copper-coloured and tend to be smaller than elsewhere.

The brush-tailed possum is the most widely distributed possum in Australia. It can be found in forests and woodlands all along the east coast, and also lives in inland areas along tree-lined rivers and creeks. They are nocturnal animals and are active at night; they usually spend the day sleeping.

In the bush, brush-tailed possums feed on leaves, buds, flowers and fruits. They have strong teeth and often use their front paws to hold their food while eating.

It is the Australian marsupial most often seen by city-dwellers, as it is one of few that thrives in urban areas, as well as a wide range of natural and human-modified environments. Around peoples' homes, brush-tail possums are inventive and determined foragers with a liking for fruit trees, vegetable gardens, and kitchen raids.

After feeding and growing for about 5 months in the pouch, the young possum spends another two months clinging to its mother's back as she moves about. Usually only 1 young is born at a time, and males do not take part in looking after the young.

By the time they are 7 months old, the young possums are independent of their mothers. They are fully grown by about 10 months, and the females will usually start to breed for the first time when they reach 12 months of age.

Except when breeding, brush-tailed possums tend to lead a solitary life. They stick to their 'home range', which they mark out by coating tree branches with a scent released from glands on their chests. If 2 possums meet at night they try to avoid each other - fights between adult possums are rare, although they may make threatening noises towards each other. Young possums may be attacked if they try to take over an adult's range.

How you can make friends with possums expand

Possums have adapted well to contact with people. However, at times this contact can be noisy and messy - particularly if the possum takes up residence in the roof of your house. If this happens, the possum can be trapped and removed from the ceiling cavity, provided you first obtain a licence from the Department of Planning and Environment. You must release your resident possum back onto the area near your property, as it will not survive if relocated to a different area. In some areas, wildlife rehabilitation groups will help you with this.

The best solution is to make friends with local possums. If you encourage a possum to stay around and claim your yard as its territory, other possums will be discouraged from taking up residence.

Although you should not feed your resident possum, you could try building it a special shelter, somewhere safe (and away from your roof cavity) where it won't be disturbed by dogs or people. Ready-made nesting boxes are also available to purchase online. Search for 'possum box' or 'nest box' in your area.

DPE has a policy on managing possums that cause disturbance to residents and business. The policy requires people to maintain their properties, including roof and chimney cavities, to prevent possums and other animals such as birds from entering the premises.

Local NPWS officers may issue a licence to you, as the property owner, to remove a possum from your roof cavity or a licensed commercial operator can remove possums on your behalf. Possums that are captured must be done so humanely and in accordance with DPE licence conditions for landholders. All possums must be released back into the area near the property.

Guide to making a possum house

Many possums are dependent on tree hollows as a place to sleep in during the daylight hours. Competition from other animals along with the clearing of many old trees means that possums may find the roof or walls of your home as the perfect sleeping place. By providing a nest box, your backyard can become a better home for possums.