Echidnas, together with the platypus, are the world's only monotremes, or egg-laying mammals.

There are two species of echidnas: 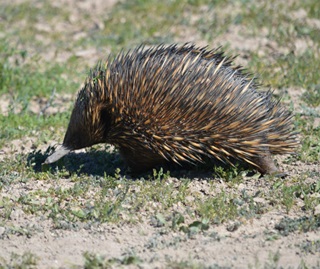 The short-beaked echidna is the smaller of the species, and individuals vary in colour depending on their location. In the northern, hotter regions, echidnas are light brown, but they become darker with thicker hair further south. In Tasmania, they are black. All echidnas have sharp spines covering the back of their short, stocky bodies.

The short-beaked echidna's snout is between 7 and 8cm long, and is stiffened to enable the animal to break up logs and termite mounds when searching for food. An echidna's mouth is on the underside of its snout, at the end. This allows the animal to feed easily - especially when suckling. Adult echidnas vary in size, from 35 to 53cm. Males weigh about 6 kilograms, while females weigh about 4.5 kilograms.

The short, stout limbs of an echidna are well-suited for scratching and digging in the soil. The front feet have five flattened claws which are used to dig forest litter, burrow, and tear open logs and termite mounds. The hind feet point backwards, and help to push soil away when the animal is burrowing. Two of the claws on each back foot are used for grooming. An echidna's tail is short, stubby and hairless underneath.

The echidna looks fearsome enough, but it is a shy animal and would rather retreat than fight if disturbed. When frightened it will curl into a ball, with its snout and legs tucked beneath it and its sharp spines sticking out. It will wedge itself beneath rocks, or burrow straight down into soft soil, to escape predators such as dogs, eagles and dingos.

Like the platypus, the male echidna has a hollow spur on its back leg. While a male platypus can use this spur to inject poision into would-be attackers, echidnas do not have this ability.

Echidnas are found throughout New Guinea and mainland Australia, as well as Tasmania, King Island, Flinders Island and Kangaroo Island. They are Australia's most widespread native mammal, being found in almost all habitats, from snow covered mountains to deserts. They are also common in urban areas, although their camouflage can make them very difficult to see.

Echidnas are usually found among rocks, in hollow logs and in holes among tree roots. During rainy or windy weather they often burrow into the soil or shelter under bushes and tussocks of grass.

For most of the year echidnas are solitary animals, although each animal's territory is large and often overlaps with that of other echidnas. During the breeding season they probably use their fine sense of smell to locate one another.

With a keen sense of smell, an echidna uses its long, hairless snout to search for food, detect danger and locate other echidnas. Termites are the preferred food, which is why the animal is often called the 'spiny anteater'. After finding food, an echidna catches the prey with its long, sticky tongue. Because it has no teeth, it grinds its food between its tongue and the bottom of its mouth.

In warm areas, echidnas feed during the cooler morning and evening hours, and sleep during the heat of the day. In southern Australia, they often stop eating during the colder months and then eat large amounts during spring. 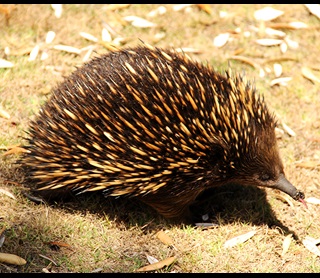 Being monotremes, echidnas produce young from eggs which are hatched outside their body, in the same way as birds and most reptiles. During the breeding season, a female echidna develops a simple pouch into which she lays a single egg. The egg takes about 10 days to hatch, producing a young animal which measures around 1.45cm (about the size of a jellybean) and weighs as little as 380 milligrams.

The young echidna, called a puggle, is carried around in its mother's pouch for about three months, during which the female will sometimes drop it into a burrow for protection.

By the time the infant leaves the pouch, its spines have started to develop, but it still stays close to its mother and continues to suckle milk through specialised pores in the skin inside her pouch. Although they begin to eat termites and ants soon after leaving the pouch, young echidnas are often not fully weaned until they are several months old.

Echidnas have been known to live for as long as 16 years in the wild, but generally their life span is thought to be under 10 years.