Adult shells vary in size from about 50 to 200mm in length but most shells fit snugly in the palm of your hand. The shell colour of mussels ranges from brown to black, although it can be green in young shells.

Freshwater mussels should not be confused with basket shells, another common bivalve which inhabits coastal rivers. Basket shells are small and triangular, reaching a maximum size of about 15mm. The external shell of basket shells is usually orange while the internal surface has a purplish tinge.

MUSSELp is a comprehensive online database documenting specimen collections from major museums around the world. Use the database, together with the following information, to identify mussels in NSW.

Distribution in NSW: All streams. Most common in lower reaches

Microhabitat: Areas of still-slow current often in soft sediment. Found in alcoves near streambanks and behind logs, undercut banks, and impoundments behind weirs

Distribution in NSW: All streams except the Hunter and Shoalhaven rivers

Microhabitat: Slow-moderate currents in sand or gravel of glides and pools

Distribution in NSW: Absent or rare in the Hawkesbury-Nepean River and south of the Shoalhaven River

Microhabitat: Slow-moderate currents in sand or gravel of glides and pools

Distribution in NSW: North from the Hunter River

Microhabitat: Moderate-strong currents, often in boulder-stabilised habitats on outer bends; pools at the base of riffles and cascades 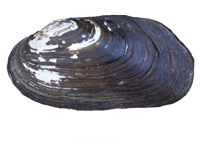