Freshwater turtles are reptiles with hard shells that protect them from predators. They spend most of their life in the water only coming on land to migrate between water bodies or to nest. 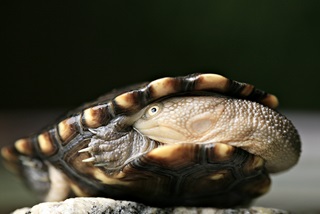 Australia is home to about 23 species of freshwater turtle. All but one of these species belong to the family Chelidae, which is found only in Australasia and South America. These ‘side-necked’ turtles retract their head and neck beneath their shell by folding it to one side, rather than drawing their head backwards as most of the world’s species of turtles and tortoises do.

Australia is also home to 6 of the 7 species of marine turtle, but lacks the truly land-based tortoises that occur on all other continents except Antarctica.

New South Wales is home to 7 species of native freshwater turtle, two of which are found nowhere else.

North American species of freshwater turtles like the red-eared slider turtle have also been found in the Sydney region, probably as a result of people releasing imported pets into local waterways. 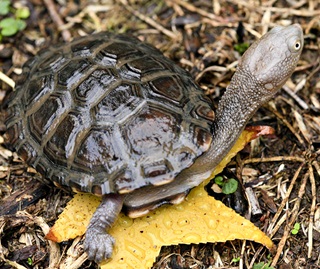 This is the most widespread species, occurring in water bodies throughout NSW with the exception of the highest parts of the Alps. It is easily distinguished by its wide plastron (the under part of the shell), made up of pale yellow shields with black margins. It is often seen crossing roads, where unfortunately it is frequently killed by motor vehicles. When handled it exudes a smelly secretion that helps to repel predators. It is a carnivorous species, feeding mostly on small invertebrates such as worms, snails and insect larvae, including mosquitoes. 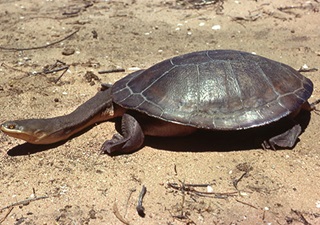 This is the largest freshwater turtle in Australia, with a shell measuring up to 485mm long. It looks rather like the eastern long-necked turtle but has a flatter head and a narrower plastron without black margins on the shields. Despite its large size it is seldom seen, as it has secretive habits and rarely emerges from the water. In NSW it occurs at lower altitudes in the Murray-Darling river system. It is also a carnivore, but generally feeds on larger prey than the eastern long-necked turtle, such as shrimps and yabbies. It lies in wait and uses its long neck to strike out and catch fast-moving prey. 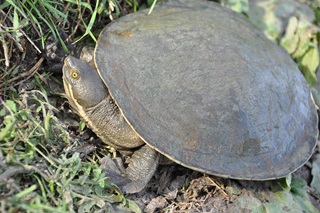 This turtle occurs in all but the coldest parts of the Murray-Darling River system. It is also found in coastal NSW rivers, from the Queensland border to the Sydney region. Its eye has a bright yellow iris and it has a single cream or yellowish streak along the side of its head and neck. Young animals sometimes have pale yellow spots behind the eyes. The plastron is a uniform cream or pale yellow. The Murray River turtle is often seen basking on logs in the sun. It is an omnivore and eats large amounts of water plants and algae as well as invertebrates. 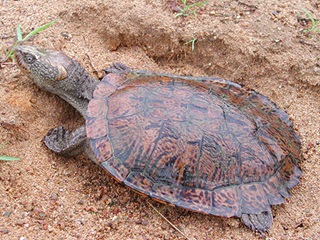 This species inhabits the rivers of the NSW north coast and hinterland as far south as the Richmond River system, and also occurs in Queensland and the Northern Territory. Its name derives from the saw-toothed rear edge of its upper shell or carapace, although this feature is not always present in adults. Its plastron colour is variable. Like other species of its genus it has a hard cap on the top of its head and an omnivorous diet, consuming both plants and animals. 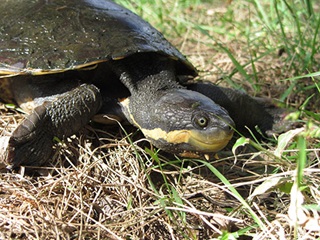 This turtle is confined to the Manning River and its tributaries on the mid-north coast of NSW. It has a similar appearance to the Bellinger River turtle, but genetic analysis has shown that the two are not close relatives. Young animals have patches and streaks of bright yellow on the lower surfaces of their head, neck, limbs and tail, although this tends to fade with age. The plastron is typically yellow with dark margins around the shields. Its diet consists mainly of aquatic insects and plants. 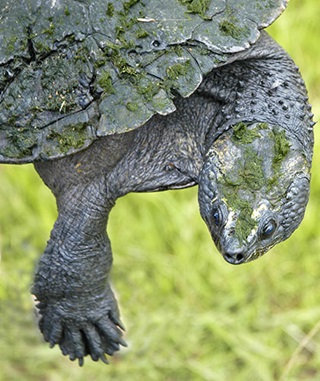 This close relative of the eastern saw-shelled turtle is found in northern NSW and just across the border in Queensland, inhabiting the upper reaches of the Border Rivers, Gwydir and Namoi river systems. It often has pinkish or yellowish streaks and patches on the lower side of its head and body and a blackened plastron. It is an omnivore and has been reported to eat fallen fruit as well as water plants, algae and insects. 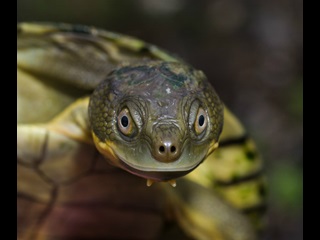 This species is restricted to the Bellinger River system on the NSW mid-north coast. It has a broad yellow stripe along each side of the face and neck and a yellowish plastron with dark outlines on the edges of the shields. It’s another omnivore, eating plants as well as a variety of aquatic insects. 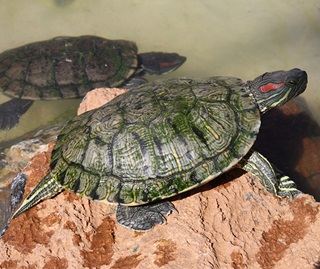 This introduced species from North American is occasionally reported from waterways and roads in the suburbs of Sydney. The name slider is derived from the turtle’s habit of slipping into the water when disturbed while basking on a rock or log. Red-eared slider turtles are easily distinguished from other species that occur in NSW by broad red stripes behind their eyes and the ability to draw their head straight back under the shell rather than folding it to one side. They also have narrow yellow stripes on their head, neck and limbs. They are another species with a broad diet of both plants and animals, and they may compete with native species for food. 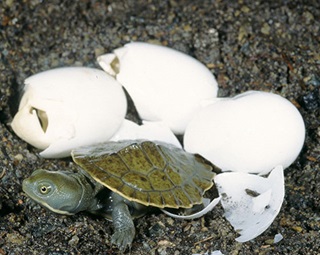 Australia’s freshwater turtles spend most of their time in rivers, lakes, swamps and ponds, including farm dams. However, they sometimes come onto land to migrate between water bodies or to nest. Some species can also survive for months in a dormant state buried in soil or dry lake beds. However, they are not able to feed out of water.

Nesting turtles dig a hole in the ground with their hind legs, lay their eggs in the hole, then cover the eggs with earth. A clutch may comprise as many as 25 eggs, depending on the species of turtle and her size. After a few months the eggs hatch and the hatchling turtles make their way to the water, where they typically take around 10 years to grow to maturity.

Little is known about the life span of Australian freshwater turtles, but they can probably live for 50 years or more. 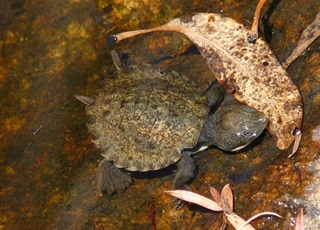 In NSW, freshwater turtles face many threats. Introduced foxes and pigs rob their nests and in some areas consume over 90% of their eggs. The baby turtles that hatch from the few remaining eggs have to contend with turtle-eating fish, birds and other predators. Adult turtles are protected by their shells from most natural predators when they are in the water, but when they venture onto land they can be killed by dogs, foxes or pigs, or crushed by motor vehicles.

Droughts also take a heavy toll on turtles by drying their habitats and depriving them of food. In addition, turtles are often drowned in illegal fishing nets or killed by fishers who become annoyed at catching a turtle instead of a fish on their hook.

Although some populations of native freshwater turtles are thriving, in many places they are declining because of the combination of hazards they encounter and the long time they take to reach an age at which they can begin to reproduce. Fox control is often an effective way to boost turtle recruitment and enable depleted populations to recover.

These ancient reptiles are diminishing in numbers around the world, mainly due to human impacts. Freshwater turtles are threatened by such things as:

How you can help

It's easy to help protect freshwater turtles. Here are a few simple things you can do:

Under NSW law it is an offence to harm native turtles without a licence, and heavy penalties apply. If you suspect that someone has unlawfully harmed a turtle of other native animal, please report it to the Environment Line (131 555). Please report suspected illegal fishing nets to the nearest Fisheries Office or the Fishers Watch Phoneline (1800 043 536).