Gliding possums are marsupials sometimes referred to as flying phalangers, or simply as gliders.

There are many types of gliding possums, from tiny feathertail gliders that are the size of a small mouse to the almost cat-sized greater gliders.

Feathertail gliders (Acrobates pygmaeus) are small, measuring between 6.5 to 8cm in length from head to body.

They are mouse-shaped and have grey-brown fur on the back and a white underbelly.

The distinctive tail is quill-like and hairless, except for a fringe of long stiff hairs down either side that resemble a feather. Their tail is about 7 to 8cm long.

Feathertail gliders only weigh between 10 and 15 grams.

Their gliding membrane extends from elbow to knee and is thicker than other glider species. 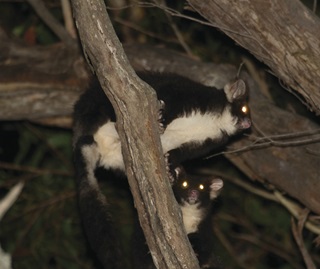 The greater glider (Petauroides volans) is the largest gliding possum with a head and body length of 35 to 45cm and a long furry tail measuring 45 to 60cm.

The greater glider has thick fur that increases its apparent size. Fur colour is white or cream below and varies from dark grey, dusky brown through to light mottled grey and cream above.

It has large ears and strongly reflective eyeshine in the beam of a spotlight making it easy to detect. 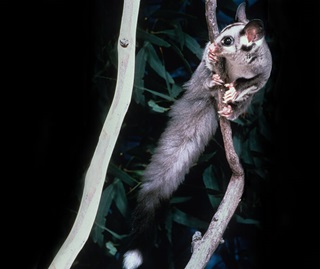 Adult squirrel gliders (Petaurus norfolcensis) have a head and body length of about 20cm.

They have blue-grey to brown-grey fur above, white on the belly and the end third of the tail is black.

There is a dark stripe from between the eyes to the mid-back and the tail is soft and bushy averaging about 27cm long.

Squirrel gliders are up to twice the size of sugar gliders, and their facial markings are more distinct.

The sugar glider’s (Petaurus breviceps) fur is a blue-grey to brown-grey, with a dark stripe that extends from the middle of the head to the mid-back region.

They are about the size of a rat with adults weighing between 100 to 160 grams. They have a round face and their tail is thick and may have a white tip. 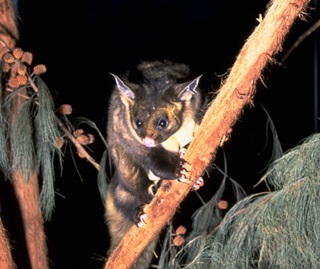 The yellow-bellied glider (Petaurus australis) is a large, active, sociable and vocal glider.

Adults weigh 450-700 grams, have a head and body length of about 30cm and a large bushy tail that is about 45cm long.

It has grey to brown fur above with a cream to yellow belly, which is paler in young animals.

The dark stripe down the back is characteristic of the group.

It has a large gliding membrane that extends from the wrist to the ankle.

How do they glide?

A gliding possum has a 'gliding membrane' - a thin sheet of skin which stretches between its forepaws and its ankles.

When it leaps from a branch, its outspread limbs extend the membrane, allowing the animal to glide from tree to tree.

At first the leap is downwards, but as the animal increases speed, the angle of flight flattens out. With its long, well-furred tail acting as a rudder, the glider can steer towards its next tree.

Then, just before landing, it uses its tail to bring it into a 'nose up' position (much like an aircraft landing). Feet stretched out in front, it is ready to grasp the tree trunk and land.

The yellow-bellied glider can cover distances of up to 140 metres in one leap. The sugar glider and squirrel glider can reach about 50 metres.

Gliders generally live in a wide variety of eucalypt forests, most of which line the east coast and ranges of Australia. Sugar gliders have the widest distribution, as they can stand a greater variation in climate than the other species.

They can be found in many different habitats, from the tropical parts of the Northern Territory to the cooler areas of Tasmania. Yellow-bellied gliders, on the other hand, are restricted to rich forest ecosystems that provide a continual supply of food.

Gliders usually make their nests in tree hollows, which they line with dry leaves. Some species, particularly the greater glider, mark out their territory by using scent glands. They rub the gland against the trees to warn off intruders.

The greater glider is the only gliding possum that does not live in a family or social group. These animals only come together for mating, and usually only one young glider is born. Other gliders have one or two at a time, although the feathertail glider can have a litter of up to four.

A naked, newborn glider (also called a neonate - a term which applies to all newborn marsupials) would fit on your thumbnail. Following birth, it crawls through its mother's fur to her pouch, where it attaches itself to a teat. Here it is kept warm and nourished with milk. After about three or four months it will come out into the nest and, with the adults, search for food.

When the young are big enough to look after themselves, they will usually leave the family and set up a group or territory of their own. Some females may stay with the original group, but males are often forced to leave.

Gliders are protected in NSW. The squirrel glider and the yellow-bellied glider are quite uncommon. They have been listed as vulnerable under the Biodiversity Conservation Act 2016, and are in need of special protection.

The greatest threat to gliders comes from the destruction and alteration of the forest habitats in which they live. Gliders need mature forests with lots of tree hollows to nest in. When forests are cleared they lose their home and food supply, and may become prey to other species such as owls, foxes and cats. The gliders are easy targets in cleared or open areas.